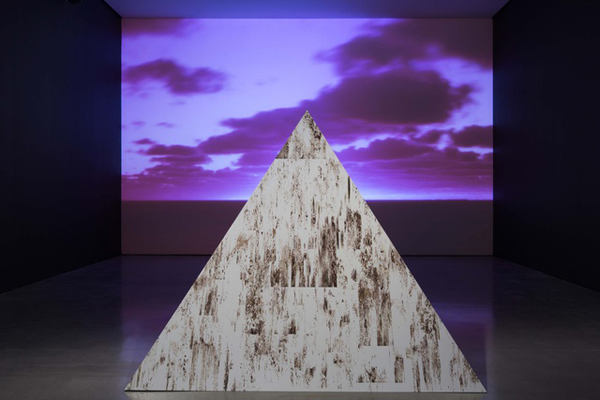 There are ways in which the internet is like a ghost. It exists in the physical world spectrally, at once oppressively — or conveniently – pervasive and seemingly intangible, invisible and indefinite. The digitally literate know that the internet’s physical infrastructure spans the globe, manifesting in massive data centres, choke points where networks meet and transoceanic fibre optic cables. However, the cables lay deep beneath streets and oceans, and the data centres vanish under high security and into remote, removed landscapes. These literal and metaphorical burials serve to nourish the notion of internet-as-spectre.

In an effort to reconnect with a web that had come to feel disembodied and disenchanting, Paris-based American artist Evan Roth (b. 1978) embarked on an internet pilgrimage to the Cornish coast. Cornwall is a major telecommunications hub, as the site where the first transatlantic telegraph cables came ashore in 1866 and the present-day home of fibre optic cabling that is estimated to carry a staggering 25 percent of the world’s internet traffic. The relics from Roth’s autumn 2014 journey into the embodied web are currently on view in Evan Roth: Voices Over the Horizon at London’s Carroll/Fletcher, where they take the form of photographic prints, laser etchings, videos, sculptures, embossed “rubbings,” and a website.

In Cornwall, Evan Roth sought out the web’s elusive traces with an unconventional artist toolbox of ghost-hunting gear: full-spectrum cameras, thermal flashlights, and electronic voice phenomenon recorders. To Roth, ghost-hunting equipment metaphorically captured his pursuit of a seemingly spectral web. The artist has said: “Ghost hunting communities talk a lot about ghosts as being disembodied human energy, so in that sense there’s a crossover because the internet is this place where we send all of our selves, packaged into the fiber optics as data and information.” His paranormal approach distinguishes Roth’s project from the various — and at this point, numerous — journalistic and artistic exposés revolving around the web’s physicality.

The ghosts in the machine aren’t content to haunt Cornwall’s vacant landscape; Roth brings them wailing into the gallery space. In the downstairs gallery, crackling radio static from Roth’s homemade “ghost box,” a device that scans radio frequencies for paranormal communications, comingles with the sound of the waves and wind of the Cornish coast to an eerie effect. Upstairs, ultraviolet videos in which fingers tap the blank screens of mobile phones — how rote those strange, empty movements have become! — emit a disconcerting staccato of thumps. A GPS mapping Roth’s route to Cornwall (5:30 hours, 316 miles) spins in a dizzying circle on its pedestal, as if begging for exorcism. Perhaps most ghostly of all is the sharp feeling of loss that suffuses the exhibition. Outside of quests of curiosity, people often seek ghosts in response to a death, in answer to a loss with personal resonance. Roth’s search for the internet is similarly bereaved. As black-and-white photographs of manhole covers and satellite dishes mournfully commune around a figure-8 of 2km of direct bury fibre optic cable, the viewer feels in her bones Roth’s shattered belief that the web had a potential that was lost and became a ghost of what it could have been. 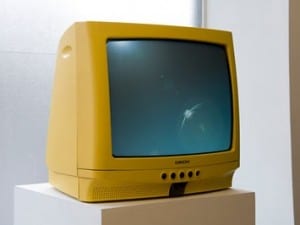