Is there any other design or architectural practice as charming as Heatherwick Studio? Can we imagine anyone else going to such extremes of inventiveness to realise their projects? The word “innovation” has been used to the point that it has become hackneyed, but rarely would its use be so justified as describing, for example, a project that required the invention of a machine with a spike covered roller used on sheets of foil, in order to exert a precise amount of crinkling, allowing it to become an insulation material for the exterior of a building. Or in another case by solving the problem of how to retract a bridge, not by swinging it or lifting it, but by rolling it up like a millipede. This bridge is made up of eight triangular segments so that when it is fully contracted it makes a perfect octagon, combining functionality, a reference to nature, and pure geometry all at once, none of which are perhaps as important as the aspect of wonder and strangeness that this helpful animated object conveys.

The Rolling Bridge in Paddington Basin is one of the studio’s better known projects, along with the Seed Cathedral (the UK pavilion at the 2010 Shanghai Expo), East Beach Café in Littlehampton, the B of the Bang sculpture, and most recently the new Routemaster bus. Apart from revisiting these “greatest hits”, the main requirements of this exhibition must be to bring other lesser known projects of the studio to light, and to reveal something of their thinking and process. These requirements are satisfied through an array of means: segments of objects such as actual parts of buildings, and the bus, are displayed along with models, sketches, prototypes, finished pieces of furniture and large scale photographs. These objects are stacked on densely clustered plinths, allowing many to be seen at the same time from any position in the room, which upon entering provides the view of a great abundance of forms, giving the exhibition the enjoyably visual aspect of a good sculpture show. The various exhibits are supported by video clips and by recordings of Thomas Heatherwick, the studio’s founder, talking about the processes of developing the projects.

Thomas Heatherwick’s character is evident throughout the projects, and listening to him explain how they come is a good addition to the show as his excitement about the work is infectious. Something that surely drives his colleagues, who may need the motivation when working on projects as demanding as Bleigiessen, a scultpural installation at the Wellcome Trust which required a team to work in shifts for weeks to hand attach the 142,000 glass spheres to the wires that suspend them, filling an eight storey high atrium. Or for those who worked for six months to construct Autumn Intrusion as a window display for Harvey Nichols. But both of these projects must have been rewarding to be involved in, as the results would be so satisfying (and acclaimed). Autumn Intrusion far exceeded the usual remit of a window displaying by weaving in and out of the building along its whole façade. Bliegiessen is a beautiful cascading form whose shape was found by plunging molten metal into water.

The behaviour of materials under different conditions provides the forms for several of the projects, this is sometimes to purely to produce a shape as in Bleigiessen, and on a larger scale with a Buddhist Temple in Kagoshima, Japan. Here the idea came from looking at the folds in a monks robes, but the studio experimented with different materials to produce a form for the building, eventually choosing rubber to ripple, hang and sag into shape.

To my mind the projects get more interesting when it is the properties of the materials that are at play in the buildings and object. The strength of glass under compression is the source of another bridge project, proposed for King’s Cross. Here over a thousand sheets of glass will be clamped together under tremendous pressure to create a bridge that has no support other than the friction between them. This instance of using glass is a telling one, as it is one of the few appearances of the material in this exhibition, despite being the most ubiquitous material in contemporary architecture. If Heatherwick Studio use a common place material, it is used in an extraordinary way. For example the bench made by forcing aluminium through a die (cut out shape), which creates a functional piece of furniture at one end that tapers towards a crumpled twisted sculpture-like shape at the other.

A ready-made product, a roll of zip, is the source for one of the most pleasing products the studio have produced, Zip Bag. A great demonstration of their lateral thinking, a bag is made of one long continuous zip that spirals around up it’s whole height, when unzipped it doubles the size of the bag, and, as if this wasn’t enough, makes it stripy. The Zip Bag has the lightness of touch that really gives these projects their charm, none of them are embellished by needless decoration – or any other form of complication – when decisions are made to affect the buildings and objects aesthetic qualities, the modifications the studio have made are always meaningful, revealing either a quality of a material (such as the woven steel of Boiler Suit, a facade wrapping around a boiler house which both cools it and helps it contribute to a legible environment), a geometric play (such as the winding triangles of Vents in Paternoster Square, their shapes created by folding an A4 sheet of paper) or (more rarely) making reference to some aspect of the site, such as Worthing Swimming Pool. This building is made from stacks of planks, ordered toward the rear, becoming chaotic towards the front of the building. A direct reference to the event of a “wood slick” washing up on Worthing Beach in 2008 after the Ice Prince was wrecked and lost her cargo.

I have not yet mentioned one of the most charming aspects of the exhibition, the inclusion of the studio’s Christmas cards. Here the ingenuity and craft of the studio is distilled into something small, cheaply produced, and ephemeral. Perhaps with the restrictions of the format the studio becomes its most resourceful, setting itself challenges such as making a card with the minimum elements (just the postage and offical stamp), and using all its wits, such as a card that makes an illustration of a christmas tree using just 1p and 2p stamps up to the necessary value to post it, and another which uses 24 tiny envelopes and cards as one, creating a Christmas card as an advent calendar. To achieve some of these the studio went to the lengths of making friends with the staff of the Kings Cross Post Office sorting room and hand stamping centre, so that stamps could be captured floating in a block of resin or made into a ring of stamps that were cut out after stamping, amongst other technical feats. This willingness to collaborate and to be involved with all stages of production, even after a project would normally have left their control is a crucial element of their design approach, without which most of the Heatherwick Studio projects would not have been conceivable, never mind possible.

Bringing together all of these projects in one place makes it clear that Heatherwick Studio have achieved something remarkable: they have created a coherent and recognisable body of work, covering a variety of scales and applications, that is able to be spectacular, sensitive, unique, and useful, without using any kind of repetition or following any kind of architectural style, other than perhaps a kind of modernism based on the maxims of form, function, and truth to materials, but by far exceeding the conventional application of these established norms. 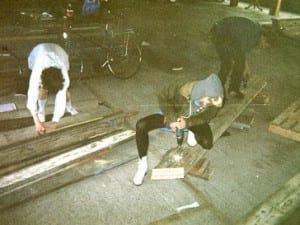