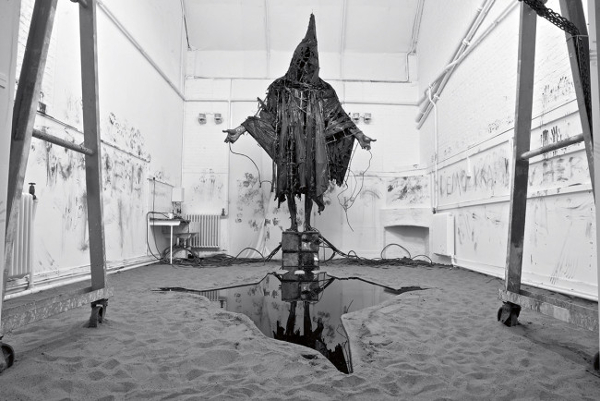 Almost a decade after the publication of the infamous Abu Ghraib-tortured prisoner images taken during the Iraq war, mac Birmingham will this month be exhibiting a first major solo show from newly elected Royal Academician Tim Shaw (RA). Black Smoke Rising will include some of his most seminal works, on display until 8 June.

Black Smoke Rising engages with issues surrounding torture, specifically during the Iraq War but also in a wider setting, and examines the reality of the human cost born out of conflict. Following the release of the Abu Ghraib images showing the torture and abuse of prisoners in Iraq to the world’s media, Shaw’s work has unrelentingly asked difficult questions about political reality. Working in constructed steel, barbed wire, and black polythene, his work captures a dark and unforgiving atmosphere bursting with dire and critically posed subtext.

His sculptures provide a searing vision of the abhorrent and politically charged that at once demand empathy from his audience whilst pointing an accusatory finger at us all. The strange, dark shapes loom over anyone standing before them with a powerful, emotive beauty that, unafraid, asks uncomfortable questions about the nature of war. Fuelled by barbaric and menacing tones, Shaw’s pieces also adopt a Christ-like quality to them, perhaps drawing on the vulnerability and suffering of the victims of torture as much as the repulsive aggression of its perpetrators. In the accompanying piece Man on Fire, originally conceived for the fourth plinth in Trafalgar Square, London, and also on display at mac Birmingham, Shaw asks “What god of love inspires such hatred in the hearts of men?” Also included in the exhibition is Soul Snatcher Possession, which captures the tense moments in an angry crowd right before an act of unspeakable violence will occur.

Shaw, who was born in Belfast, in no stranger to political unrest and the themes of conflict and ritualistic violence occur throughout his work, conjuring images from his own early experiences of the Belfast ‘troubles’. Emboldened by experience, Shaw’s work is unforgiving in its portrayal and unrelenting in its questioning; the artist endeavours and succeeds in his search for the harsh realities of warfare and all that accompanies it. Drawing upon conflicts in the last decade Casting a Dark Democracy is broader in its concerns; expanding to explore the primitive instincts of humanity in times of conflict, Shaw’s work argues it to be a universal concern traceable throughout history. 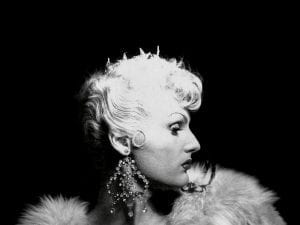 The Photographers’ Gallery, London, provides an intimate glimpse into a pocketed history of cross-dressing, and those that lived through it. 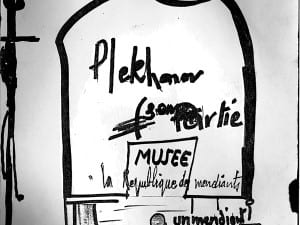 Issa Samb: From the Ethics of Acting to the Empire without Signs, Rivington Place, London

Curated by Koyo Kouoh, From the Ethics of Acting to the Empire without Signs will showcase a new installation that references the changing environment of Issa Samb’s atelier. 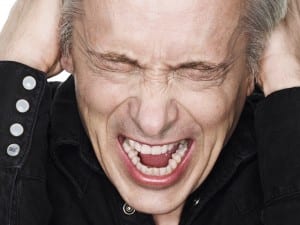