For three years, between January 2017 and December 2019, British photographer Joshua K. Jackson (b. 1984) walked through the lamp-lit and neon-filled streets of London’s Soho at night.

Jackson initially picked up a camera as a way to “escape the frustrations of insomnia.” The result is Sleepless in Soho, the photographer’s debut monograph with Setanta Books.

The images explore the juxtaposition between the Soho of today and the “faded character” of its past. Jackson’s works are increasingly meaningful at a time when the nightlife industry is under pressure.

As a London-based image-maker, Jackson focuses on life within cities, expressed through a rich visual language of colour and abstraction. The shots are almost painterly, reminiscent of Saul Leiter’s (1923-2013) New York works.

Sleepless in Soho combines text and visuals, and is accompanied by a poem by Sarah Tucker: “Guided on by the flickering of neon lights / I know well the hours filled with sleepers dreams / I search them peacefully as I journey through the nights.”

Michael McCluskey’s cinematic photobook is full of compelling images taken under nightfall. It leaves viewers to plot the beginning, middle and end.

A Sense of Escapism 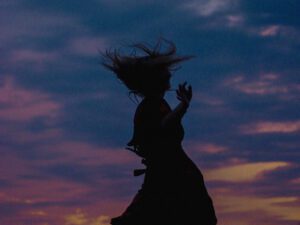 A Sense of Nostalgia

Lauren Tepfer’s photographs reflect on being a teenager living in suburbia: a place of endless nights, warm summers and, often, mystery.