Not Vital (b. 1948) is driven by exploration, having established a number of studios across the globe. There is an archaic iconography running through his current show at Museum der Moderne, Salzburg. Outside the gallery, viewers discover a large stainless-steel head sitting in the landscape. It’s a mosaic of pieces that have broken and stuck together again. Inside, a pile of smashed-up sculptures is stacked against the wall in a pyramid, fragments cascading to the ground. Fragments appear again and again like ruins of an ancient civilisation, asking questions about where they came from, and how they came to be here.

“The history of racism runs parallel to the history of modernity and is its untold dark side.” – Doris Salcedo (b. 1958). In Shibboleth (2007), the Colombian-born visual artist placed a giant crack stretching the length of Tate’s Turbine Hall. Audiences could walk alongside the 548-foot fissure; it was a visual representation of borders and separation. Salcedo created the installation to subvert perceptions of modern architecture and its values, addressing a long legacy of racism and colonialism. The idea was to expose a fracture in our foundations – encouraging viewers to confront uncomfortable histories.

Baptiste Debombourg’s (b.1978) Turbo gives the impression of gallery walls caving in. There is pressure from the outside: an unnamed presence bursting into the room. Fracture lines trace up towards the ceiling, creating a feeling of imminent collapse. The monumental work crumbles towards the viewer; it’s a reminder of transience and decay, and a critique of power. Paris-based Debombourg cites “turbo-folk” music amongst their influences, a controversial genre which emerged in the West Balkans during 1980s and 1990s. It blends Serbian folk music with other genres such as pop, rock, electronic and hip-hop. The artist’s other installations comprise shards of broken black glass.

Cornelia Parker (b. 1956) has spent the last 40 years making ambitious installations that make sense of the volatile, violent and precarious world in which we live. She has become world-renowned for dredging objects and ideas to the surface that many people would rather stay buried. Her pieces – which are realised through many mediums from sculpture and film to needlework – reflect on uncomfortable truths about the climate crisis, violence and freedom. Above is Heart of Darkness (2004), created with burnt wood retrieved from a forest fire in Baker County, Florida. It was intended to be a controlled burn, but due to extreme weather became a wildfire that consumed tens of thousands of acres. 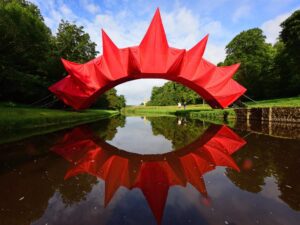 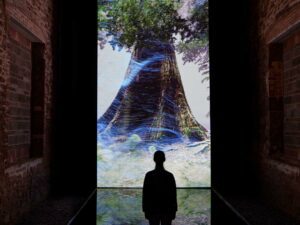 Barbican revolutionises the climate conversation, showcasing art as a speculative tool which can help us to bring about sustainable futures.