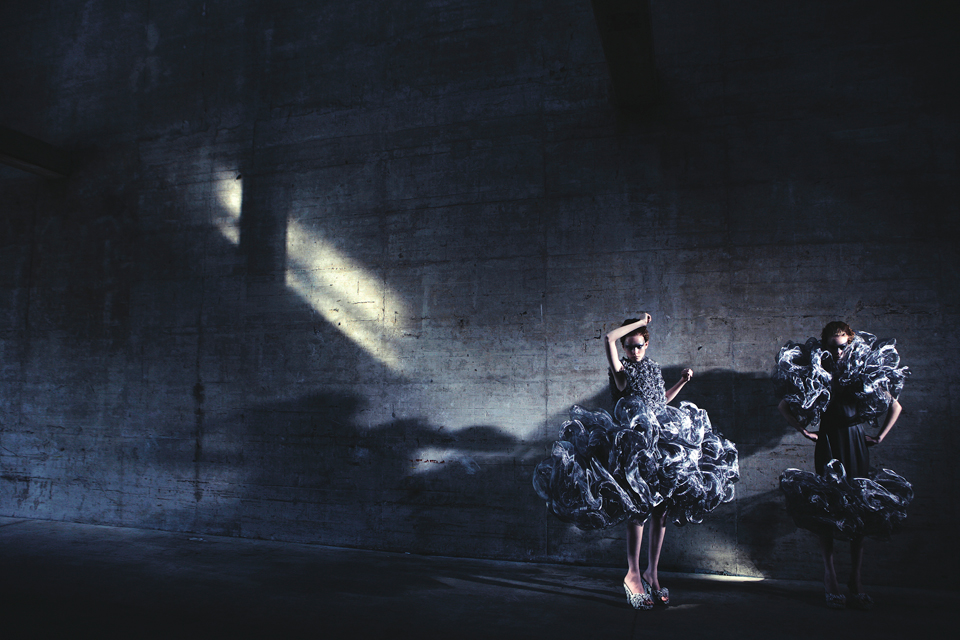 Towards the end of the 20th century Dutch style began to forge an alternative, fresh identity in comparison to that of more established designers in the fashion capitals of Paris, Milan, London and New York. Since the 1990s the Netherlands has become renowned for its idiosyncratic, experimental and highly creative output. This surge in popularity can largely be attributed to the pioneering, internationally recognisable work of behemoths such as Viktor & Rolf and Iris van Herpen. These design houses have since taken their collections to Paris and beyond, having graduated from Amsterdam Fashion Week, which is a showcase for emerging and young designers, supported by the Dutch Fashion Foundation.

A new exhibition at Gemeentemuseum Den Haag, entitled Ode to Dutch Fashion, aims to highlight the evolution and growing importance of Dutch design as well as its role as a creative powerhouse throughout the 20th century. The industry has gained critical respect and recognition for its inventive vision, even if this has not always translated into broad commercial success. This is reflected in a recent initiative, undertaken from 2009 to 2012, called Dutch Design Fashion Architecture, which sought to raise the international profile of the Netherlands’ creative industries by generating international partnerships and collaborations. The importance of the Netherlands’ university art departments (most notably the Fashion Design course at ArtEZ Institute of the Arts, Arnhem, whose alumni include Viktor & Rolf and Iris van Herpen) are also not to be underestimated.

Ode to Dutch Fashion is the biggest survey of Dutch fashion presented in the Netherlands (and internationally, with the exception of the Barbican’s major retrospective of Viktor & Rolf in 2008). Although the show primarily aims to celebrate the experimental spirit of the country’s contemporary designers, curator Madelief Hohé has a more reflective view, arguing that “most of the generation that started it all in the 1950s and 1960s is either already gone, or really not working any more. The people who remember them and work with them are still there, [so it’s] a nice time to pay them our respect and it’s a timely evaluation.” The exhibition’s title reflects this more retrospective, nostalgic stance in conjuring the impression of romantic musings on times gone by.

The show champions the strong signature styles of the designers at its core. While themes of invention and exploration are common amongst the represented designers, there isn’t a specifically Dutch “look” or image to take away from the exhibition. This heightened individualism ts appropriately into the Netherlands’ role throughout history as an important trading area at the centre of Europe. Since the 16th century the Netherlands has had a strong tradition of commerce. Many of the paintings of the Dutch Renaissance are notable because they form the start of a new body of work commissioned not for religious ends but to celebrate the entrepreneurial spirit and nancial success of its new breed of merchants. Its historical openness to trade and opportunity means that aesthetically Dutch creatives have no qualms about taking tropes and motifs from other cultures and assimilating them as part of their own. Hohé states: “We were always trading and embracing things from other countries, like chintz and cotton and making them part of our own culture.” Most notably, the Netherlands originally imported the tulip from Turkey, but it quickly became known as a Dutch icon due to the status and vast wealth generated by its cultivation. The country is also recognised as one of the great reformation centres of Europe and its strongly Protestant ethos meant that Dutch society shied away from the extravagance, decoration and opulence showcased in more southern, Catholic countries such as France and Spain. Paintings of the Dutch Renaissance by artists such as Jan van Eyck and Johannes Vermeer show their subjects in sober shades of black, blue and grey, but these, in turn, allow the exceptional painterly skill and naturalistic effects of light that characterise the Northern Renaissance to come to the fore. Furthermore, these artists pioneered the idea of portraiture as a truthful representation of the sitter rather than the perpetuation of an ideal type. This backdrop of sobriety captures the zeitgeist of the ultra-minimal spirit of the 1990s when Dutch design came into its own.

The exhibition catalogue chronicles how Dutch fashion typically followed international models up until the 19th century, which saw the introduction of the Hirsch & Cie Belgian fashion house to Amsterdam in 1882 and brought the luxury and couture of the Parisian ateliers to the Netherlands. The influence of Paris continued until the work of Joan Praetorius started to show what Hohé describes as the “clean lines” and “Dutch simplicity and quality” which started to attract significant international attention. A generation of post-war designers, including Max Heymans, Dick Holthaus, Frans Molenaar, Fong Leng and Frank Govers began developing an increasingly “Dutch” style which centred on monochromatic palettes that were occasionally punctuated by explosions of bright colour and idiosyncratic touches. This story is broken down into both time periods via thematic rooms, but its ordering is not strictly chronological. The rooms focus respectively on: the colour blue (an important hue in Dutch craft), the 1880s-1910s, geometry in the 1920s, colour in general, 1950s female clothes, rock ’n’ roll looks (particularly in leather), the graphic lines and space- age influences of the 1960s, black and white abstraction, the 1990s and nally the concept of freedom, which Hohé highlights as “a very important aspect in Dutch fashion and culture.” It is a diverse representation of a country’s creative achievements and seems to deliberately deny a linear narrative or coherence between each separate section. Rather, the curation of Ode to Dutch Fashion celebrates the freedom to create, without boundaries, a specifc look and identies a wealth of trends that make it ever more challenging to define exactly what Dutch style looks like.

Garments from a huge variety of designers are represented in the exhibition, including Frank Govers, Max Heymans, Frans Molenaar, Fong Leng Tsang, Maarten van Dreeven, Marga Weimans, Edwin Oudshoorn, Jan Taminiau, Iris van Herpen and Viktor & Rolf. As the leading lights of Dutch fashion and some of the only Dutch designers to be awarded major exhibitions of their work outside of the Netherlands, Viktor & Rolf represent what many see as the Dutch “look.” Traversing the boundaries of art and design since 1993, the pair introduced a surreal and ironic take on ideas of clothing and consumption. Their fashion shows are often high-octane presentations that embrace the story-book fantastic ideals of their highly original designs. Their haute couture is likely to become ever more theatrical, given the duo’s recent announcement of their intention to abandon ready-to-wear and focus solely on the couture. Viktor & Rolf’s high profile collaboration with H&M in 2006 did, however, afford the brand exposure to the mass market beyond that of the elite, and has reinforced the duo’s synonymy with Dutch fashion.

The innovative, sculptural designs of Iris van Herpen have the notion of technological progress at their core; an investigation of form and technique lies at the heart of van Herpen’s work. Since starting her own label in 2007, van Herpen has rejected the use of traditional soft fabrics to embrace the sculptural nature of new materials and the ways in which technology can mould them into exciting new forms.

Her latest series explores the potential for 3D printing to mimic the organic forms of leaves, owers and even coral. Her inclusion in the V&A’s current What Is Luxury? exhibition has cemented her status as a prestigious designer in an industry where effciency and economy are becoming increasingly valued above luxury materials. Van Herpen originally trained as a dancer – a focus on the body in movement informs all of her pieces. The manner in which the hardened forms shift and shimmer when modelled creates an intriguing dialogue with light and comments on the purpose of clothing as a means of blending into the rhythm of daily life.

Similarly, Marga Weimans, who was celebrated in 2012 at a solo exhibition at the Groninger Museum, uses richly contrasting graphics and new technologies to create sculptural, foam-like pieces that project from the body. Weimans’ Surinamese background heavily in uences her work and she creates a clear narrative with each collection, which is often highly politically motivated. Jan Taminiau, best known for dressing Queen Máxima in an exquisite blue gown at King Willem-Alexander’s coronation but who has also dressed Rihanna and actress Sylvia Hoeks, shows the more glamourous side to production with beautiful couture dresses, often adorned with heavy embellishment.

Taking a less trend-led approach, Edwin Oudshoorn layers his handcrafted couture pieces with signi cant historical references and there is always a sense of drama, the stories behind each gown hinted at rather than developed by sculptural shapes. Although his work is more traditional than that of other designers on display, Oudshoorn highlights another aspect of Dutch style: a novel celebration of the country’s heritage, produced in his in uential design studio in the heart of Amsterdam. The eclecticism of this collection demonstrates that today, more than ever, it is impossible to definitively characterise the Dutch fashion philosophy. The thread that runs through all the pieces included in the show, is the narrative of entrepreneurial discovery, while exhibiting simultaneously an eager readiness to absorb influences and inspiration from around the entire globe.

In contrast, Sabrina Bongiovanni’s photography for the catalogue anchors many of the clothes in a typically Dutch setting including a dike, tulip field and of course, amidst the bustle of the city. While this method risks reducing the photographs to the tropes of caricatures, it does create a unifying feature and acknowledges the role of light-hearted humour and a tongue-in-cheek irony that typifies a lot of the works. Ode to Dutch Fashion does not represent a hard and fast reading of its subject. Instead, it acknowledges the innovative designers at the helm of what is a constantly shifting and evolving enterprise, highlighting fashion from the Netherlands as worthy of attention and admiration. 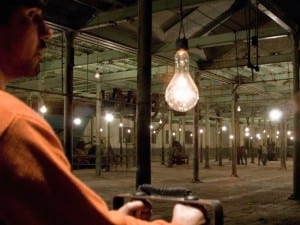 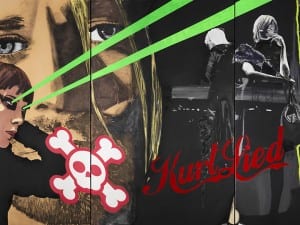 At only 26 years of age, Stuart Semple is one of the most exciting young British artists around. He fuses 80s influences with an informed view of popular culture. 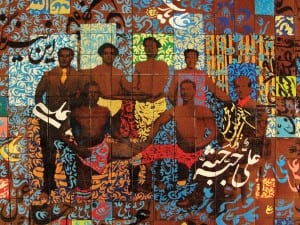