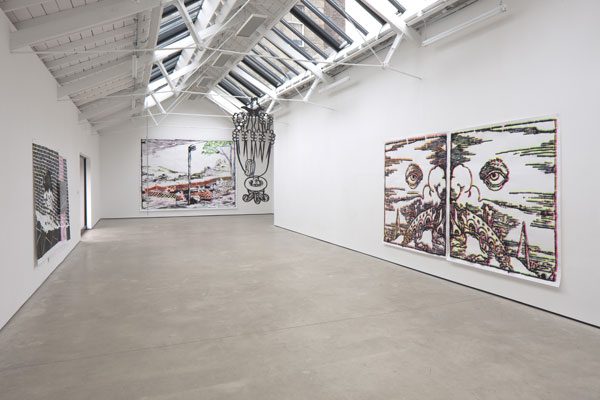 The Rose Engine, an exhibition of new work by London-based artist Simon Periton has been unveiled at The Modern Institute. Periton’s third solo exhibition at The Modern Institute has developed out of his interest in decorative tradition and its link to the world of finance and security. Periton has created intricate cut-outs in steel and aluminium alongside large-scale spray-paintings on paper and glass, which toy with opposing themes and imagery already prevalent in his work, such as: order and anarchy, alchemy, astrology, culture and counterculture. The Rose Engine portrays a scene of decadence bought about by an amalgamation of the decorative and beautiful with allusions to economic decline.

The exhibition’s title The Rose Engine refers to the specialised geometric lathe, which produced complex rose-like patterns called “Guilloches”. These intricate patterns were specifically designed to be forgery proof and were used on mass produced printed matter such as bank notes and postage stamps, as well as the exclusive Fabergé eggs.

The context of the gallery space has been approached with the freshness of a studio environment, allowing the process of research, experimentation and production to become a major component in the exhibition. Anchoring the space is the silhouette of The Hanging Debtor, suspended, upside down from the central beams. Made from water cut steel, with the residue of layers of spray-painting, the debtor’s image is based on a German illustration from 1438. He hangs upside down appearing calm and content, the bags of coins in his cloak defying gravity. His figure acts as a stencil to the gallery space, part obscuring, part accentuating the surrounding elements. Formally this piece connects with the large stencilled works on paper and with the two giant scalpels. These over-sized scalpels are reminiscent of the form of a guillotine blade; more specifically Periton states that they refer to the German Fallbeil or falling axe, used during the 18th/19th centuries to execute debtors. One of these scalpels is gold plated, the other is powder coated black, alluding to the contrast between the beautiful and luxurious, and the disturbed and corrupt.

Prevalent within the wall-based works are the recurring motifs of eyes and holes. One of Periton’s large spray paintings on paper, titled The Vigilant Eye depicts an eye on a shepherd’s crook in a secluded landscape, human civilisation existing only in the far distance. The image is an enlarged version taken from Lux Claustri (The Light of the Prison), a collection of engravings by Jacque Callot made in 1628. This all Seeing Eye re-appears in several of Peritons other works, maintaining a constant, watchful presence over the space.

A round concave glass painting within a wooden frame hangs at one end of the gallery space. The piece incorporates the enlarged image of Benjamin Franklin’s eye taken from the 100-dollar banknote portrait. This eye is entwined with patterns from an early doily piece (Black Riot Fart Doily, 1997). The glass painting is partially mirrored and stares back across the space, through The Hanging Debtor towards the other Vigilant Eye. 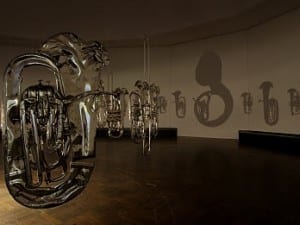 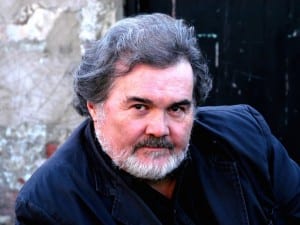 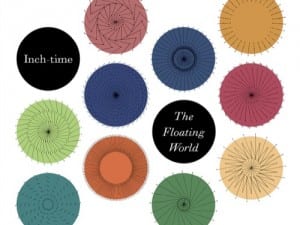