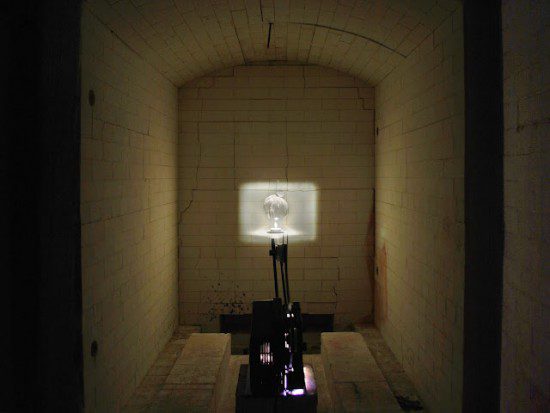 The Catlin Art Prize, an annual event showcasing the most promising art school graduates one year on

from their degree exhibitions, opens tomorrow at the Londonewcastle Project Space and includes new work by artists who demonstrate real potential to make a mark in the art world during the next decade. Following the publication of the Catlin Guide 2012, the shortlist of artists taking part includes: Gabriella Boyd, Poppy Bisdee, Jonny Briggs, Max Dovey, Ali Kazim, Adeline de Monseignat, Soheila Sokhanvari and former winner of theAesthetica Creative Works Competition, Julia Vogl. Working across painting, sculpture, performance and film, the shortlist is incredibly diverse, however, there was something about the work of Poppy Bisdee that caught our eye.

A former student of Wimbledon College of Art and a recipient of the LUX Moving Image Prize 2011, Bisdee was recently selected from more than 10,000 graduating students to show her work in Future Map 11, an important annual exhibition which returned to the Zabludowicz Collection for the second year running.

Aesthetica caught up with Poppy Bisdee ahead of the opening to find out more.

BR: Let’s start off by talking about what you do. What is the main thrust of your creative practice? Where did it all begin for you?

PB: I am fascinated by the viewer’s experience of art, and the ephemeral elements which make up that experience such as light, space and time. I am interested in the relationship between the viewer and the artwork, and the role of the viewer within the exhibition environment. My work is often a response to a space where it is ultimately to be exhibited. I use various recording and presentation technologies such as film and projection to create minimal sculptures and installations which reflect the exhibition space, the viewer’s presence, and the duration of the viewing experience. By mirroring the viewer’s physicality through images, sounds and shadows, I hope to bring in to question their role as spectator, subject or performer.

BR: What work will you be showing in the Catlin Art Prize?

PB: For the Catlin Art Prize I will be showing a 24-hour delay video installation, presenting the viewer with a video of the space they are standing in, but 24-hours before. The space will be constantly recorded, so those viewers will be shown in the video the following day. The playing video will also be visible in the recording, so there will be a repetition of the space throughout the recordings. This piece evolved as a development of previous works where I used photography to capture and present the exhibition space.

BR: Why have you chosen to work with recording technologies and projection and what are you hoping to achieve through these media?

PB: Using recording technologies, such as photographs or films, allows me to capture the space and the viewer’s experience. Recording film, video or audio allows me to not only capture the visuals, but also a length of time, such as the duration of the viewing experience. Using presentation technologies, such as film projection or data projection, allows me to present the viewer with these recordings. Through my work I explore the sensory qualities of various forms of recording and presentation technologies, for example the quality of light or the mechanical sounds of an old film projector, with the aim to heighten the viewer’s perceptive senses. I am especially interested in projection technologies as a projection uses the same ephemeral elements that make up an experience, light, space and time. Projection allows me to explore my ideas of mirroring a space within a space, for example I have created projections of spaces, which fall directly onto the walls of the space where they were originally recorded.

BR: If you had to condense your work into three overarching ideas, what would they be?

BR: The viewer is a central element in your work, Could you expand on these roles of spectator, subject and performer?

BR: What is your personal opinion on art prizes? What purpose do you feel they serve?

PB: I feel that although art prizes are a great opportunity for artists to gain more exposure in the art world, more importantly they allow the artist to develop their art practice further, giving them more confidence in their ideas, and sometimes allowing them to make work which would otherwise be beyond their means.

BR: What’s next for you?

PB: I am working towards a group show in the summer; details are yet to be confirmed. I am also in the early stages of organising a show with a group of fellow artists, so always looking out for exciting and unusual possible exhibition spaces. For more details and updates, please see my website: www.poppybisdee.com

To read more about how Julia Vogl promotes the idea of community in her work please follow this link for an in-depth interview Aesthetica conducted with the artist in February. 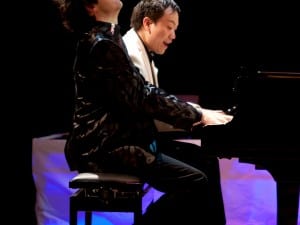 Review of The Piano Brothers Live at Kings Place, London

The Piano Brothers are not brothers by blood but by divine, energetic and rich music that is accessible to everyone. Bound together by the love of all-encompassing music, Dominic Anthony Ferris and Elwin Hendrijanto began performing together in 2009 whilst studying at the Royal College of Music. 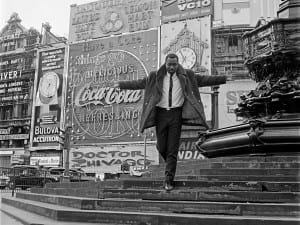