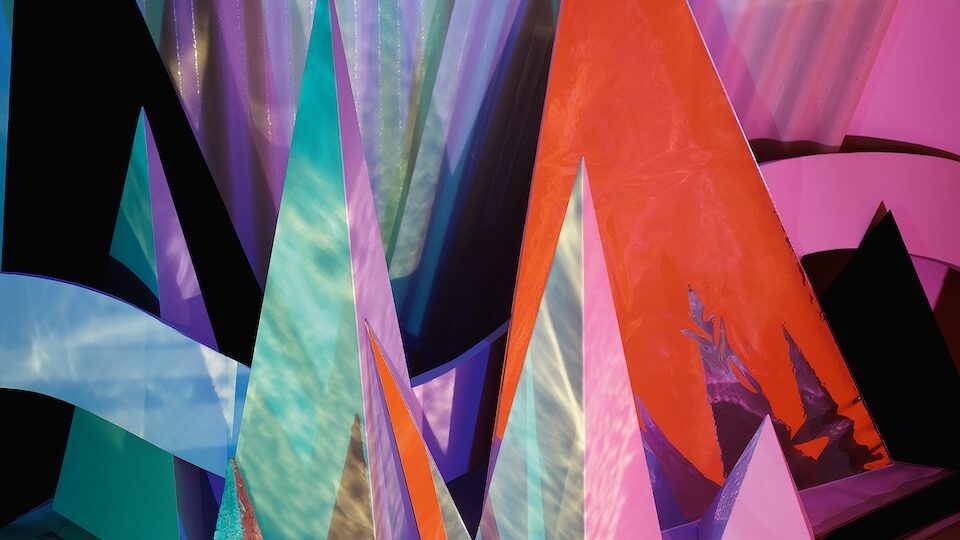 A new publication from Pompidou Centre realigns the history of abstract art with a focus on the vital, and often overlooked, contributions of women. Accompanying an exhibition which took place during Summer 2021 – and is now open at Guggenheim Bilbao – Women in Abstraction presents these artists as co-creators of global modernisms and their legacies. Aesthetica speaks with co-author and Chief Curator Christine Macel about the show, outlining how and why it came to life.

A: Can you tell us a bit about the motivation for creating this book and the accompanying exhibition?
CM: This exhibition and its catalogue were for me an urgency, considering the importance of abstraction in the museum’s collection and the fact that the movement largely developed in Paris. We have essential works by major proponents such as František Kupka, Wassily Kandinsky, Robert Delaunay and Sonia Delaunay-Terk. Thanks to acquisitions and donations, we also have major works from Natalia Goncharova, Sophie Taeuber-Arp, Maria Helena Vieira da Silva, Joan Mitchell, Etel Adnan and Huguette Caland to name just a few. My aim was to take a new look at the history of abstraction in light of the achievements of women artists, and to reflect on the fact that a large part of their history has remained invisible. I also wanted to take a global and multidisciplinary approach to abstraction, a sort of “expanded” view that goes beyond the canon of formalist abstraction often associated solely with painting.

The first question for me was to rethink the very idea of abstraction, considering that its meaning has changed considerably since the 19th century. I also consider spiritualist artists from the 19th and 20th centuries, as well as dancers like Loie Fuller and Gret Palucca and decorative artists, to have been overlooked. We have to go beyond our Eurocentric point of view by studying other modernities and other practices. The difficulty, in this case, is to access the work and finance its transport. I would have liked to have shown more modern artists from Latin America, for example, but at least what we have is a beginning. I am very pleased to have included works from the Indigenous Australian collective APY, as well as Chinese artist Irene Chou, whom I consider as a major figure in this field.

A: Why have women traditionally been erased from narratives on abstraction?
CM: The reasons are multiple. Patriarchal society did not allow women’s work to be placed under the spotlight until at least during the 1970s feminist movements. Often, women artists were not looking for recognition as much as men for sociological reasons. Abigail Solomon-Godeau explains this very clearly in her essay in our catalogue. The evolution of women’s rights and their access to artistic education in various countries shows very clearly that it was much more difficult for women artists to become visible and stay visible until the second part of the 20th century, and it remains difficult even now in many countries. On top of this, art history was mainly written by men, as art historian Linda Nochlin noted. Of course, there was also this stupid idea that a woman did not have the same capacities of abstraction. We know now that this was actually due to sociological factors, such as a lack of role-models and education.

A: How has the perception of women’s contributions to the movement changed over the last 10 years?
CM: In 2009, we had the show elles@centrepompidou at the Pompidou, which had a big impact in France and abroad. There has also been very active research in English speaking countries, with many groundbreaking shows such as the Denver Art Museum’s Women in Abstract Expressionism in 2016. MoMA showed works from its collection in Making Space: Women Artists and Postwar Abstraction in 2017. In the same year, the Kemper Museum of Contemporary art in Kansas City showed abstract works by African-American female artists in Magnetic Fields: Expanding American Abstraction. The trend has also intensified in Latin America and Asia with the recent show The Herstory of Abstraction in East Asia in 2019. Many scholars all over the world are studying abstract women artists.

A: Hilma af Klint and Lee Krasner are often cited as key contributors to the genre. Can you name some movement or individuals particularly important to the emergence of women in the field?
CM: The spiritualist artist Georgiana Houghton was a major contributor in the 1860s. She was completely overlooked until the Courtauld Institute’s exhibition in London in 2016. Loie Fuller and her development of the so-called Serpentine Dance was also a major step in 1892. Then in England, Helen Saunders and the other Vorticists were, for me, an amazing discovery. There are so many that I don’t want to rewrite a hierarchy and put more light on Hilma af Klint or Lee Krasner. All the artists I have chosen have been co-creators of the history of abstraction in a significant manner.

A: You mentioned Kemper Museum’s Magnetic Fields, which showed a series of pieces by African-American women artists, offering a fresh perspective on the history of abstraction. What role did these creatives play in the history of the movement?
CM: African-American artists have played a major role in the development of abstraction: key names include Alma Thomas, Howardena Pindell and Senga Nengudi. In 1972, Thomas, who was 81, became the first African-American woman to have a solo exhibition at the Whitney Museum. At the time, there was an intense debate as to whether abstract art could relate to the Black experience. Art historian Darby English explores this in 1971: A Year in the Life of Color – a book which hopefully overcomes this notion.

A: In what ways were women artists motivated by revolutionary political or cultural ideas?
CM: Political ideas were at the core of some artistic circles – such as the Russian avant-garde in the 1920s. Liubov Popova and Varvara Stepanova, for example, were designing clothes according to Productivist ideology. I also think of Harmony Hammond and her seminal 1970s writing for the Heresis journal. She claimed that abstraction was political and could also be used as a visual language for feminist artists.

A: What do you think the future of women in abstraction will look like?
CM: The future is wide open. I am very interested to see younger and more established artists rethinking abstraction, from Laura Owens to Julie Mehretu, from Agnès Thurnauer to Jessica Warboys, from Hito Steyerl to Ann Veronica Janssens. The possibilities of abstraction are constantly being renewed.

Find out more about the book here.

Women in Abstraction is at Guggenheim Bilbao until 22 February. Find out more here. 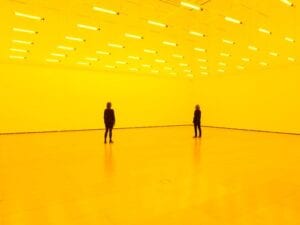 Olafur Eliasson continues to respond to social and environmental issues through creativity and advocacy in the Guggenheim Bilbao retrospective. 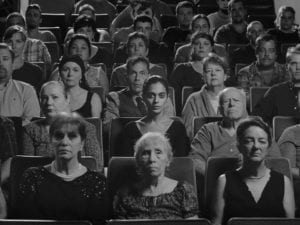 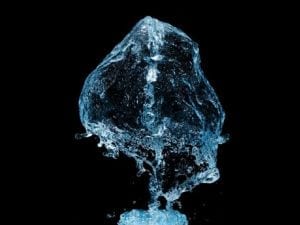