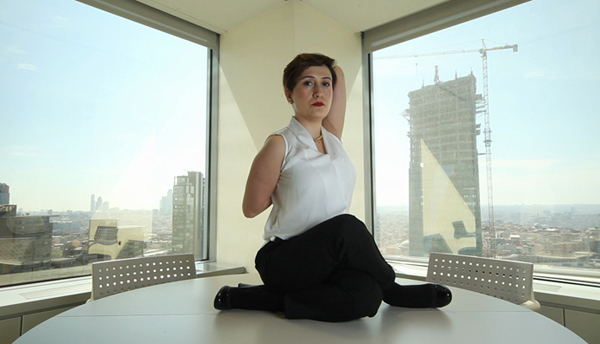 In November 2013 Iniva announced that the first recipient of its Commissions and Exhibitions Fund would be Turkish artist Burak Delier, whose work strives to provide a critique of capitalism through contemporary art. An expansive exhibition of Delier’s recent ingenious work curated by Iniva’s pioneering Chief Executive Officer Tessa Jackson is now on display at Rivington Place. Each and every work included in the exhibition exclaims Freedom Has No Script, in a manner befitting the conditions presented to us by a world of fake and fabricated freedoms.

Inspired by a history of spontaneous civil commotions such as the Gezi Park protests in Istanbul, uprisings in the Tahrir Square and the global Occupy movements, Delier provides the viewers with a range of film installations denoting the artist’s lack of freedom in art, the “ordinary person’s” lack of freedom in the corporate world and the absence of freedom at large, imposed by the uber-capitalist tendencies of contemporary living.

Delier’s film installation, Collector’s Wish (2012), shows the artist having a systematic conversation with Turkish art collector Saruhan Doğan. During the course this conversation Delier receives specific directives about the work that the collector wants him to create. The resulting work is a haphazardly painted crimson wall of exaggerated dimensions, accompanied by Turkish poet, Mehmet Akif Ersoy’s (who had also penned the Turkish national anthem) verse, The Painter is Right, propped onto an easel. Connoting the inevitable mechanisation of the artist, the work also echoes the artist’s inferior role in making decisions about his work. When driven by the desire of earning money, the artist is simply a pawn which the nouveau riche can move as they wish.

In Crisis and Control (2013) Delier portrays real white-collar office workers talking about their hopes and frustrations while performing strenuous yoga positions dressed in formal business attire. Emotionally and physically knotted, they think yoga will help them overcome the stresses of their lives. Completely unaware that the “freedom” offered to them through earning higher salaries is not freedom but a fabricated sense of reality in which obedience to the rules set by those above them is what renders the illusion of freedom active all across the world. Despite his subject’s seriousness, Delier produces work that is highly ironic and witty. About his work Delier says, “Without wit and a certain sense of humour not only is art boring but life becomes insupportable”, which really is why the more wealth white-collar workers attain, the more they become frustrated. Delier scrapes the surface of the idea that in the beginning, wealth seems to offer a feeling of security and “happiness”, but as time passes by wealth becomes a chore, a pressurising factor that creates more pain than joy.

In response to being awarded Iniva’s first Commissions and Exhibitions Fund, Delier produced another film installation, Songs of the Possessed (2014), in which he again concentrates on the psyche of the white-collar office workers. Shot in the minimalist premises of Umur Kırtasiye (a large company specialising in stationary products) designed by Turkish architect Nevzat Sayın, the film focuses on the relationships of office workers. They all walk around in circles, pause and either begin to shout at and insult each other, or they praise one another. For 14 minutes 24 seconds the white-collar employees’ concerns, fears, disappointments, hatred towards their lives and those who share it with them. Their inner thoughts become their external thoughts. The camera pans round and round the ego-fuelled workers. As the minutes lapse, the audience starts to get dizzy and feel nauseous. Delier denotes that success in a corporate environment isn’t about how great the actual work is, but how well people manage to manipulate their office relationships to their advantage. The indeterminable screaming and praising is the abstract song of those possessed by ambition.

Freedom Has No Script is an exhibition that requires the asking of questions rather than the statement of answers. Who are we? What do we want? What is freedom to us? Does work free us? What are the qualities of idleness? Why do we stick to a routine that is imposed on us? Does realising the inexistence of freedom make us freer? Can there be freedom without economics, politics and law? Do we possess the ability to grin back at our contemporary slavery on earth? If you want to ask yourself these questions in your own words, head down to Rivington Place for a riveting experience.

Freedom Has No Script will be on display at Iniva, Rivington Place until 17 May. 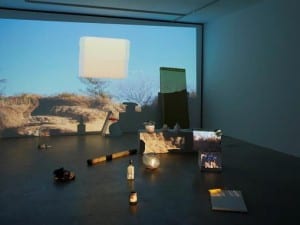 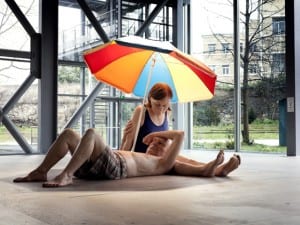 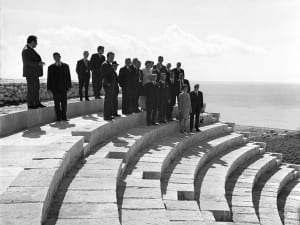