Urban spaces are complex and everchanging, rich in historic culture, yet firmly grounded in the present. Charles Beaudelaire (b. 1821) understood the city to be at the heart of modernity and encouraged artists to capture these fleeting landscapes. Over 150 years later, Transient Space responds to Beaudelaire’s legacy, inviting six contemporary artists to explore the fragile state of today’s cityscapes. Drawing on the concept of “flâneur,” the observant wanderer, and Guy Debord’s notion of the “derive,” the passage through varied ambiances linked to the conditions of metropolitan society, the featured artists demonstrate a heightened awareness of psycho-geographical influences. Suggestive of a journey through place, the works adopt distinct, critical and observational positions as well as participatory and performative stances on urbanism. Presenting a series of open-ended propositions, the exhibition challenges the viewer to re-examine their daily environments by positioning the familiar as threatening and confusing.

Highly pertinent in today’s political landscape, Nathan Coley’s (b. 1967) Parade Sculptures depict housing blocks damaged by terrorism, war or military action. The small-scale architectural models, which are mounted to resemble placards, are designed to be carried aloft, suggestive of protest. The Scottish sculptor explained that the structures “refer to a state of being… subjected to a physical shift and partially destroyed due to an act of conflict.”

With a similar focus on architectural imagery, Abigail Reynold (b. 1975) re-works archival documents through a meticulous process of folding and layering, overcoming both time and place. Collecting outdated atlases, tourist guides and encyclopaedias, the artist creates sculptural assemblages which question our relationship with recognisable British topographies, highlighting the constant, static aspects of towns alongside those that are inventive and ever-changing.

Mike Ballard (b. 1972) presents recycled sculptural works alongside textural paintings reminiscent of graffiti and vandalised signage. Through an understanding of the metropolis as a ready-made concept, the works transform the quotidian in order to draw attention to the visual noise of ordinary urban settings, exploring the fundamental boundaries between public and private and defying territorial margins.  Also manipulating the familiar signage of cityscapes, Keith Coventry (b. 1958) employs repetition and the application of flat, white paint to render such tools useless. Ontological Paintings exploits the reduced aesthetic of abstraction, transforming municipal iconography to imply utopian ambitions.

Tim Head (b. 1946) investigates the textures and perceptions of contemporary life, embarking on “flâneuristic” walks through London in order to capture anonymous, dehumanised spaces such as corporate lobbies, underground carparks and abandoned interiors. The resulting photographs are manipulated through repetitive mirroring and hand-tinting, leaving them unrecognisable. The displayed series incorporates uncanny collages never before exhibited and references transformative, sci-fi spaces evocative of super-modernity.

Furthering the theme of the active observer, Tracer by Melanie Manchot (b. 1966) which provides an alternate perspective of urban movement through the choreographing of parkour runners. The deliberately expressive actions reclaim such spaces for human agency, adapting the position of the “flâneur” from passive to active. The three-part video installation utilises long sequences and extensive compositions as a reminder of public surveillance and the power of the viewer’s own gaze. 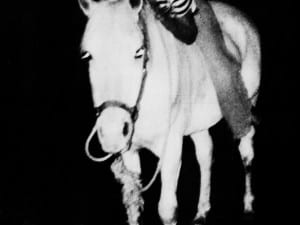 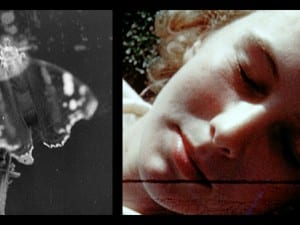 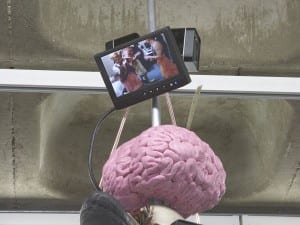