Releasing Forces Within the Human Psyche 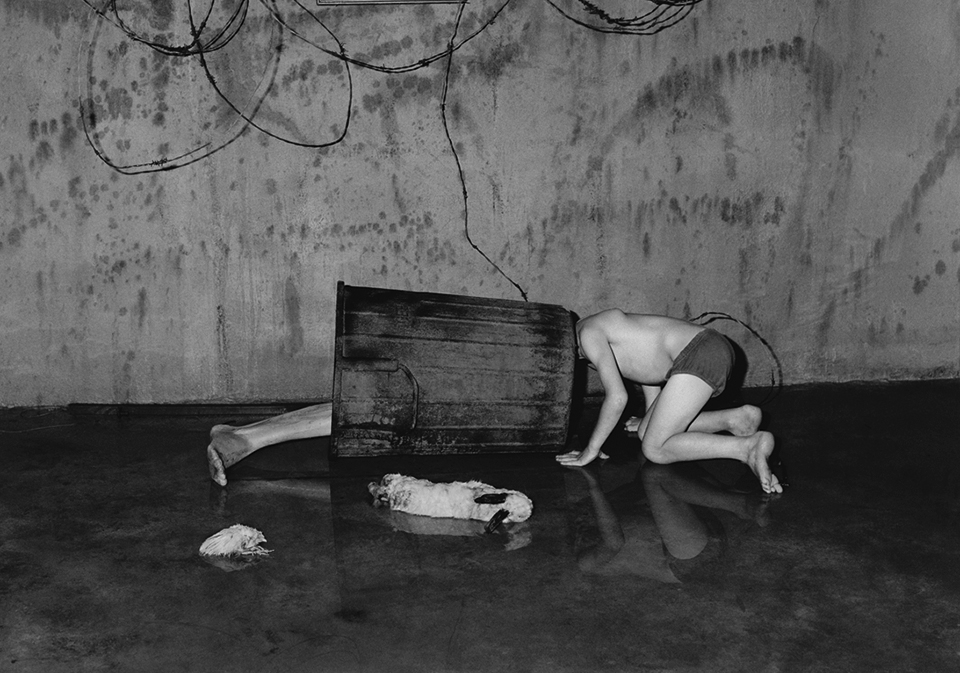 Roger Ballen employs his 50 years of photographic experience to understand what a photograph does and how it affects the human psyche in his latest book, Boarding House.

The work of photographer, Roger Ballen, is at its very core challenging. At once elusive and precise, and perhaps irrational and incongruent, it aims to release forces within the human psyche through the medium of photography. With a propensity for capturing things not as they are in real life, but as imagined within, Ballen has employed his 50 years of photographic experience to effectively transcend what is typically understood as the photographic image in his latest book, Boarding House (Phaidon, 2009).

Hailing from New York City, Roger Ballen has lived in South Africa since the 1970s. His experiences of South Africa began first in the realms of geology and mining, and later transitioned to photography. A leap, perhaps; but not if the common denominator is exploration.

For Ballen, the notion of what a photograph brings to light engages with issues around the frame of reference. “If you show someone in Africa what I do,” Ballen tells Aesthetica, “they don’t always know what a photograph is or what a painting is. So they see it in a different way. Whereas with a Western person, someone from London or New York, when they see a photograph they have a preordained understanding of what a photograph does. They immediately ask a number of questions, but not necessarily relevant ones. They don’t want to accept that what they see is just an image to deal with personally.”

Ballen’s work can be found in a number of books and collections dispersed in over 20 museums worldwide, including New York’s Museum of Modern Art and London’s Victoria and Albert Museum. Better known as a documentary photographer, based on his work in the 1980s and 1990s where he captured the soul of South Africa’s rural villages, Ballen’s more recent expressions fray his known identity. Boarding House steps past documentation and invites viewers to question what is real and what might be fiction in his stark and sometimes torturous images.

Boarding House is based on Ballen’s time spent at a lawless and hidden former mining warehouse set in the bowels of Johannesburg’s outskirts, where transient and alienated people plod through the rhythm of life amidst overcrowdedness, poor sanitation, and the psychological aches of being human in such a place. The individual elements in the backdrop of Ballen’s images tell the story of lack and scarcity, yet the compositions in their entirety evoke a psychological richness that powerfully takes hold and takes over. Something immediate, viewers find, requires your attention in the Boarding House. The immediacy, however, isn’t about a socio-political statement, so expected when considering South Africa.

Ballen is careful to clarify this point. “I’ve never really been a political photographer, although people put me into that category for my earlier work. They tried to make it a political statement when it was always more an aesthetic and psychological statement. It’s more about the human condition. I just take pictures from my own stomach and feeling and relationship to the world around me.”

The psychological entrapment Ballen creates alerts the viewer to a deeper story being told within — within the photograph and within the viewer. “What you see, ultimately, is what I see and how I express myself in a particular place. Whether that place is a true boarding house or a figment of my imagination is really for the viewer to decide,” Ballen asserts.

Ballen’s images do a paradoxical dance, which takes place between reality and fiction, despair and trust, between the beautiful and the beastly, and between wonder and fear. This kind of tension is pervasive in his work and can threaten the conscious mind. In the way that dreams carry you through goulish currents of subconscious irrationality, the dreamer cannot escape its rawness and complexity. Ballen’s viewers are similarly trapped. Nothing is straightforward. Everything, even our interpretation of what his work means tends toward the ephemeral.

Ballen’s intervention in Boarding House can be seen in how carefully the images are staged. But, Ballen is quick to note that he was purposeful and deliberate in creating not simply an image, but a psychological state. “How much of a dream is real and how much of reality is a dream?,” he asks. “We tend to divide these things, but they are not so easy to divide. I think it’s good to challenge people’s awareness of imaginary and real. Take every night when you dream, there are some things that are factual and some that are not. That’s what this book is: it takes you to that state where you’re not clear on what’s what. It’s not necessary to try to figure out what’s real and unreal. That the images affect you in some way is the point. I don’t want to be factual. I don’t know if I can be factual. I don’t know what it means to be factual.” As life presents to us time and again, wherever there is fact, there is fiction.

“It’s important in any form of art to decipher the metaphors behind the work. So one has to decide, what is it about a boarding house that makes it a meaningful place in the human experience? What is essential about this place? Is this boarding house like a theatre set where the human condition is acted out? Or, is it just a word describing a place of transience? If you start to think about that word you can find some things that relate to the human condition. In their transient place, people act out the human condition and express a part of the psyche. And the human psyche opens itself up in the Boarding House.”

“If I go back and try to find a reason, it would be the fact that in my previous work nearly all my photographs for about 15 years were frontal portraits. The people were very crucial — the nature of the people, the aesthetic sensibility of the people. Once you take the human face out of a picture, the other aspects of the image come to the forefront,” Ballen argues.

“I’ve felt for many years that people were missing the boat on what I was doing,” he continues. “The only thing I kept hearing was: Who are these people? What about the poor whites in South Africa? Up to Shadow Chamber (Phaidon, 2003), people identified me as the photographer who went to the countryside of South Africa to photograph poor whites, which I stopped doing in 1994. It became quite laborious having my work dominated by these people, whereas people were always important, other aspects of my work weren’t being dealt with. By taking the personality out of the work, all the other things came to the forefront. I think that’s what you see in Boarding House. You don’t really know too much about the people, it’s really about the place.”

However, the opening image in the book can be described as a portrait. “What I liked about putting that picture out in front is it can be seen as a documentary photograph,” explains Ballen. “When you think about what the Boarding House is or what it means to you or what it could be, having that photograph makes it all the more believable. It is crucial to the overall sensibility of the viewer, who might be unsure if this is a real place or an imaginary place, as he or she goes through the book. Pictures like the first photograph make you feel like, yes, this could be a very real physical place in Johannesburg. I think it is always better to start from the concrete and then go into the abstract.”

Something primitive emerges in Ballen’s abstractions, as represented by the occasional appearance of snakes, lizards and rats. Through their inclusion, Ballen asks us to consider larger questions such as what is our relationship to these animals? Does the relationship to animals in the Boarding House symbolise the relationship of humanity to animals? And why are rats considered dirty and snakes evil? And, ultimately, what do they mean to the viewer on a personal and psychological level? These are some of the questions Ballen hopes his images will elicit; however, he’s keen to suggest that: “You can only have your own interpretation. You try to find something truthful about what you’re looking at, but you aren’t going to find absolute truth, if it even exists.”

When passed through the sieve of the conscious mind, Boarding House might elicit a certain danger, and a pervasive darkness, which alarm our tendency toward order and innocence. Ballen’s lens, then, has become more of an instrument of his own mind, than just a tool to capture the things in front of him, an inward reflection than a scene captured. Ballen graciously gives his viewers room to evolve in their understanding of what they see and find something within themselves to reconcile.

The driving force behind Ballen’s work, it seems, is an insatiable desire for the artist to continually unfold into the realms of expression, tension, and mystery. He gives us something to ponder that we cannot fully harness. In disabling resolution, Ballen assures us that there is no final answer to what his work means.

Boarding House is an evolving mess, according to the artist, and an attempt to reconcile the past and the present in his photography. But, the work may have a larger impact. “I come from a film generation,” he says. “I am committed to black and white photography. What I’ve done in Boarding House couldn’t have been done in colour. I’m really the last generation who’s grown up with black and white, who’s steeped in that media and will continue in that media. What you’re seeing is the end of the black and white film photography. In some ways, it’s disappointing. But what can you do? You just have to focus on what you do and do it well. You can’t control others. When my heart beats, 6 billion other hearts beat. It’s just a small little ball in the universe.”

Boarding House was released in March 2009 by Phaidon. www.rogerballen.com. 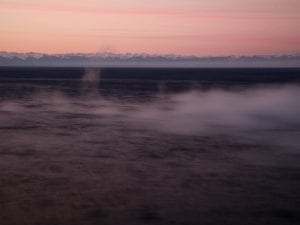 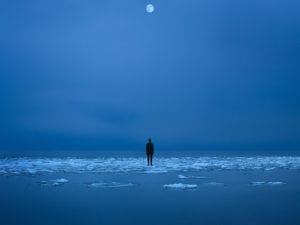 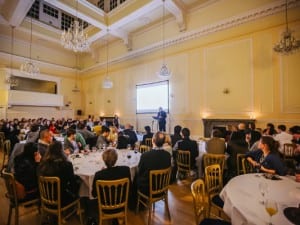