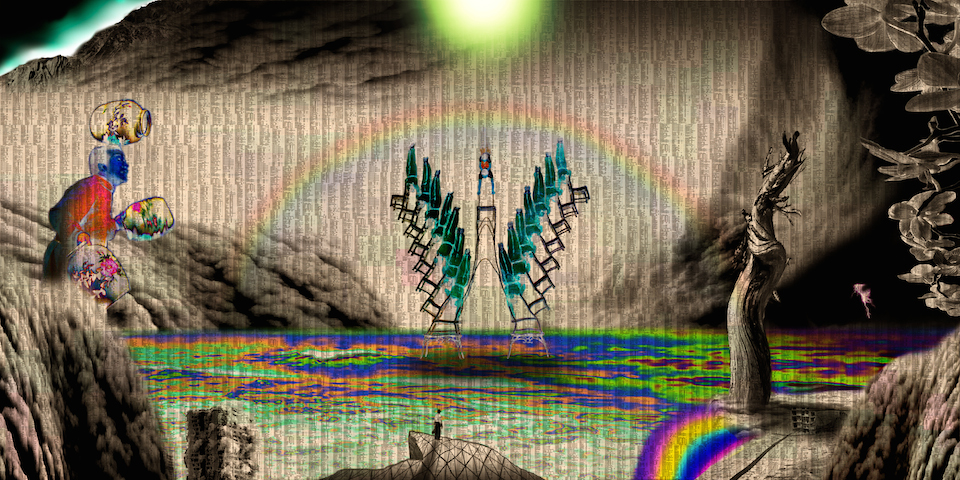 Gordon Cheung is one of the UK’s most fascinating artists. His 2008 show at the Chinese Arts Centre in Manchester, Death By A Thousand Cuts, highlighted hybrid cultures and the rise of a new superpower. With dreamlike expression and elements of hyper-reality, the show was socially relevant and thought provoking.

Gordon Cheung is an artist of the highest calibre. He creates fantastical landscapes that combine both reality and virtual reality, alongside contrasting utopian and dystopian ideals spliced together in collage on canvases with a diverse array of materials, such as spray paint, acrylic, pastels and, perhaps most interestingly of all, stock listings from The Financial Times. Cheung is of Hong Kong descent and was born in London in 1975, where he lives and works. He became interested in painting as a child, he says, “I was the only ethnic person in my secondary school, so my experiences there weren’t particularly positive and I immersed myself in my own world of making art. My interest has always been in an in-between space perhaps that has something to do with my background of being both Chinese and British.”

Cheung studied at Central Saint Martin’s College, followed by an MA at the Royal College of Art. “I used to read a lot of art theory and it confused me for many years. I thought this is the stuff I should be reading and grasping somehow. I would be reading it seven times over and grasping maybe one sentence. It took me three years after leaving my Masters at the Royal College to realise that actually I should give this stuff up and read novels. When I did, it was just an explosion of ideas. It was such a difference, creativity in novels and films were things that were far more parallel to my own creative structures, and they stimulated huge bodies of work and I rediscovered a sheer enjoyment as well and realised that perhaps art school academic philosophy had constrained me, even though it gave me discipline for the structure.” Cheung’s work has been featured internationally in a vast array of solo and group exhibitions from Japan, to London to Iceland.

Cheung’s landscape compositions are striking and very intricate techniques are required to create them. “I start with an idea in the back of my mind that could have been inspired by a film or a novel, or even a conversation, or maybe just a walk that triggers an impulse to make something. I then trawl the Internet for images and I catalogue and sub-catalogue the images into categories like trees, mountains, twisted trees. I think of it as my virtual palette and then I drag together images that trigger something within me into Photoshop and I begin to construct them into a composition and over time it snaps into the right visual tensions. I print the images out onto the stock listings of The Financial Times and jigsaw them back together on the canvas with spray paint, oil paints and acrylics into the final image.”

One of Cheung’s most admirable qualities as an artist is his hunger for inspiration, which is reflected in the varied nature of his work. So many artists become stuck wanting to realise a certain aesthetic or idea that it can hinder the creative process. “When I left art school, I said to myself that I have to open myself up to any inspiration, any motivation, everything is channelled through me and funnelled into the paintings. That does mean that you don’t over analyse at the early stages, you allow things to happen and the painting will breathe a life of its own and will tell you in a sense where to go next.” Cheung continues, “There is so much to respond to and for me during art school the discourse of modernist painting was very insular and too closed off to what I felt was happening around the world. It is such a turbulent time at the moment and for painting, or art not to respond to this global situation is for me a huge surprise.”

Death By A Thousand Cuts is the title of Cheung’s latest solo exhibition at the Chinese Arts Centre in Manchester and it responds to the rise of China as the next potential superpower. The title refers to “Slow slicing”, a form of execution used in China from roughly AD 900 to its abolition in 1905. How is the notion of Death By A Thousand Cuts relevant to the world today? “The title came about from a Chinese torture method — exaggerated for racial reasons by certain Westerners at the time. Nowadays it describes the incremental deterioration of a policy or a system.”

Cheung continues, “I generally have an interest in power and belief systems and how we exist within those structures and how we are obedient to them and the way the world is changing with the rise of China as the next potential superpower, and how it is affecting the world order. I find all of these ideas fascinating on almost a mythological scale. These are our modern day myths, but they’re real and the only way that I find that I can capture a sense of that is almost to draw upon these ancient stories that have lasted thousands of years, so I do look at Greek myths and Chinese mythology and almost re-translate them into contemporary contexts. I found a book in Chinatown about Chinese acrobatics from the 1960s or early 1970s. I was also looking at Chinese propaganda posters and I have subverted a combination of these images of Chinese acrobats and placed them into my typically post-apocalyptic landscapes. I think of them as almost zombies; B-horror zombie movies have always been a comment about consumerism and capitalism and about how we become brain-dead zombies, who are often wandering around empty shopping malls or suburban settings. I took all these populist themes as a way of making a comment about this mass mutation into a consumerist model and one that is incredibly successful in China.” The exhibition contends with the major themes prevalent in the world today; the impact of technology, consumerism and globalisation, but Cheung’s work also acts as a passport to the past and mythology. “Mythological stories exist for reasons, because somehow they touch on some universal truth about humanity, because they say something about us as a people and that is part of our roots.”

Death By A Thousand Cuts is a relevant and thought-provoking exhibition and showcases the excellence and development of Cheung’s work, but what can we expect from him in the future? “I’ll be working towards solo exhibitions in Germany and New York. It generally takes me a while to build an idea of what I want to achieve for each of the shows, but each one definitely a development from the previous shows.” 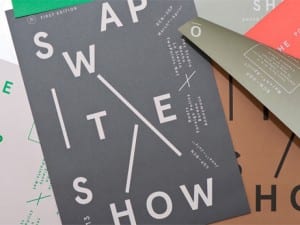 Yah-Leng and Arthur are the co-founders of Foreign Policy. Together, they are a think tank based in Singapore that realises and evolves brands with a creative and strategic deployment of ideas. 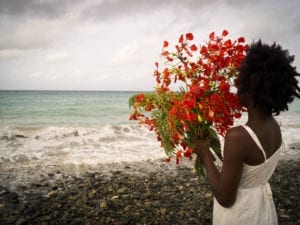 What will the future look like? This question forms the blueprint for The Other Side of Now: Foresight in Contemporary Caribbean Art.