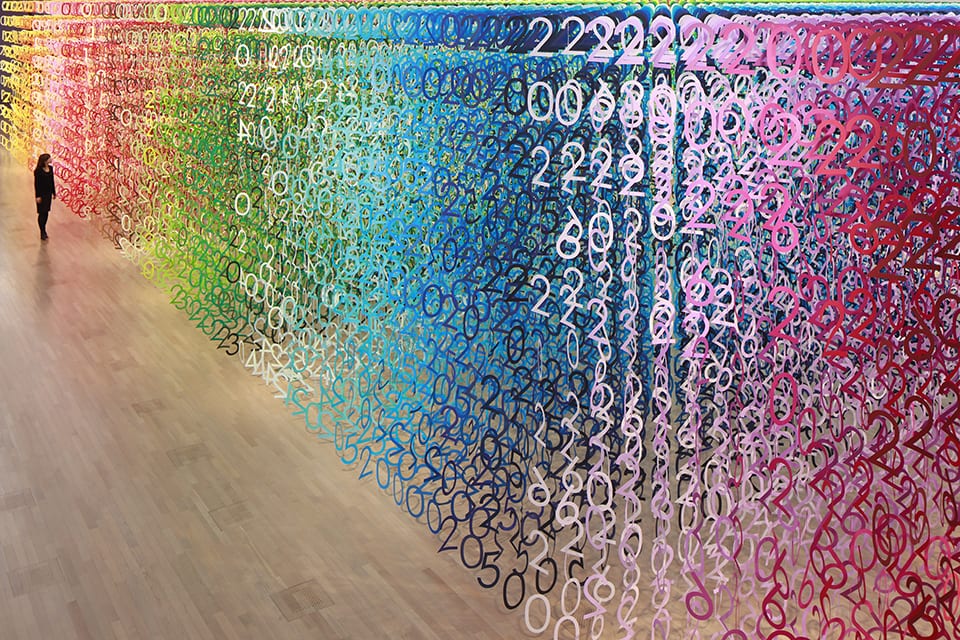 Data plays a huge role in our lives today. Emmanuelle Moureaux creates an immersive installation that assesses how numbers are related to memory.

Emmanuelle Moureaux (b. 1971) is a French architect who has been living in Tokyo since 1996, where she established a design practice in 2003. Both her commercial and creative works are inspired by Japan’s seemingly infinite colours and textures, revelling in kaleidoscopic buildings and installations that play with a sense of time and place. Moureaux utilises an invented concept called shikiri – literally dividing space with colour. To achieve this, she suspends hundreds of layered paper cut-outs and adorns building façades with cubes, rods and platforms. Moureaux was shortlisted for the Aesthetica Art Prize in 2017, as well as being nominated for many other accolades with Architizer A+, as well as the International Design Awards and the American Architecture Prize.

As part of NOW Gallery’s latest Design Commission, Moureaux has created Slices of Time. The installation, which is on view from 5 February to 17 April, is inspired by the gallery’s location on the Greenwich Peninsula – home to Greenwich Mean Time (GMT). The exhibition marks a sense of movement, reflecting upon past, present and future. The project encourages audiences to contemplate the here and now, as well as the importance of dates, history and archiving.

A: Slices of Time utilises NOW Gallery’s location as a starting point for its conception. How important is it to you that an installation responds to its surroundings? Where did the idea for this piece originate?

EM: Installations ultimately contain elements from sculpture, architecture and sometimes poetry. The prime incentive of installations is to give audiences a three-dimensional spatial experience, changing the perception of a given environment and adding some magic to an existing space. For Slices of Time, I was inspired by the special location of NOW Gallery on Greenwich Peninsula, near to the Meridian marking time. NOW Gallery is the beating heart of this new area of London, so it seemed fitting for me to produce something that captures precious moments along the rifts of time – that asks audiences to stop and consider their surroundings and be within the present. I was also inspired by the gallery’s name. “Now” is a concept that’s always changing. It’s in a state of flux and can never really be defined, so my project expresses this flow of time. It comprises 100 layers of numbers in 100 shades of colours, as well as 20 layers of numbers in white. The installation visualises the next 100 years to come (2020-2119) and the past 20 years (2000-2019) are represented through the white. The shape of the installation, as slices of earth – of time – offers a moment for audiences to think about themselves.

A: Like many of your other pieces, this commission expresses emotion through colour. How do you think colour can be used in a universal way? How does it provoke certain feelings, memories or ideas without the need for explanation or interpretation?

EM: Colour can create unlimited emotions. It can make people smile and laugh. It can offer energy, joy, surprise and most importantly, happiness. Colour is universal and eternal, borderless and infinite. Using the full spectrum in the context of a public space can expand on the location and redefine its parameters. It adds additional layers of humanity, by connecting to the visual and the visceral in new ways.

A: Your practice has wholly been inspired by the textural and visual information found in Tokyo’s city streets. How have you interpreted this?

EM: I first saw the cityscape of Tokyo when I was a student in 1995. I was so impressed by the entire landscape. Thousands of colours seemed to be floating throughout the metropolis – as layers, as three-dimensional elements. It was like nothing I’d ever seen before; it was as if I was looking at colours for the first time. I felt a lot of emotions and was so overwhelmed that I decided to move there. This relocation then provided the wider inspiration for my own design concept called shikiri – which means dividing (literally creating) space with colours, rather than as a finishing touch applied to surfaces. Through this methodology I want people to breathe and immerse themselves in colour – feeling the whole spectrum throughout their senses and through their entire body. It is a visceral and powerful experience.

A: How do you interpret colour as a three-dimensional element, offering something conceptual and spatial beyond aesthetics or composition?

EM: Usually in architecture or interior design, colour is often considered as a minor, two-dimensional element. I want it to provoke some kind of sentiment that radiates through a space. Throughout every project, I apply the concept of shikiri, altering shape and function according to varying places.

The idea of cutting and enveloping locations has evolved overtime. Originally, I was inspired by the Japanese traditional screens and it has moved on from there. I started looking at the surface of shikiri, then developed the idea into lines – as straight poles or monuments within a space. Now, I am working with numbers – representations of digits within a large space. What binds these projects is developing new “forms” of colours through segmenting the architecture and layering bodies of materials.

A: How do your architecture and fine art practices intertwine? Do you find that they influence each other?

EM: I am always on a journey between different scales, from a small art piece to architecture. There are no specific boundaries between each discipline. For example, with stick chair (2007), I attempted to push the limits of piloti – pillar structures – using colourful rods to support an oblong seat. This idea of using columns or pillars was transformed into a  spatial element in sticks (2010) – an installation where rods are used on the floor like blades of grass. The sticks are then scattered across a space, pointing in various different directions and physically cutting up the room. Sugamo Shinkin Bank Shimura Branch (2011) – also known as rainbow mille-feuille is a building which stacks flat layers of colour up the side of the façade. This has since been remodelled in the scale of furniture as mille-feuille (2013) – creative storage solutions whereby you can pull out the blocks as drawers. My interlocking modular artwork, toge (2011) uses urchin-like components which, locked together, can be built into a self-standing flow of colour. I hope to turn this into a building in the future. So, the intersection between practices is one of influence and inspiration. Architecture has always been the backbone of my creations, but the essence of art – expressing the emotions of everyday life – is what fills my designs with the human condition.

A: Slices of Time includes a spherical representation of the Earth, floating within the space. How will this be installed? How does it respond to the gallery’s design, with a glass façade across seven metres?

EM: Slices of Time, as with all my other installations, is composed of a huge number of modules which have to be perfectly aligned in three-dimensional grids. It will be the largest number of modules that I have worked with: 168,000 numbers, attached one by one on fishing lines prepared in Tokyo. The lines will be fixed on a frame on the ceiling of NOW Gallery. It is a very long and complicated process. Everything is made by hand and is prepared prior to the set-up. It means a huge amount of time and the participation of a lot of people. NOW Gallery, with its glass façade, is visible from its exterior. Viewed from outside, the installation appears as a floating multi-colour cloud. When you enter the space, you realise that it is composed of small numbers.

A: Our world is increasingly fast-paced, with 5G around the corner. We are constantly immersed in a dissemination of information, and questions of what’s true or false. How does this latest commission offer a sense of calm or contemplation amongst all this? What are you hoping audiences will take away from the experience?

EM: In an ultra-digital world, this installation is ultra-analogue, using very simple material (paper). It is very simple and very complex at the same time – it is calm and serene in appearance, but has a bold meaning within the numbers. I hope visitors will find it moving – feeling the colours with all their senses and becoming more conscious of that which surrounds them every day. Visitors are also encouraged to write down a date, sharing an important moment with other people. This, in turn, connects the gallery to the environment – with a multitude of experiences and memories.

A: How does this installation differ from your ongoing 100 Colours series – which comprises sheets of hanging material that flow from one colour into the next?

EM: The character of Slices of Time is in its form: each layer is a circle, representing the Earth. The work is part of my 100 colours series – a project which began in 2013, forming spaces through 100 shades of colours, visible in one glance. Generally, we are never given the opportunity to see so many colours in one sitting. Ingesting all this visual information triggers a physical response and asks audiences to respond and engage with the environment around them. The series also plays on the idea of numbers and data in our increasingly quantifiable age – 100 is familiar as a unit, representing percentages, rating and point systems.

EM: I will be unveiling a permanent sculpture in Tokyo in April, as well as a rendition of Forest of Numbers in a 12th century church in France in September. I have also designed bridges, platforms and both the interiors and exteriors of cars for a new train line in Taiwan. The project is called Circular Line. I have been working on this since 2011. There are many more to discuss, however I can ensure you that there will be 100 colours popping up all over the world! 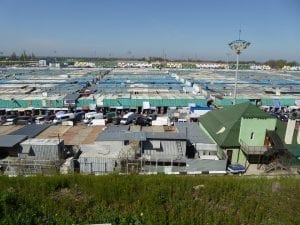 YSP hosts a collaborative exhibition by artist and academic, Nishat Awan. Migrant Narratives of Citizenship traces the route of the refugee crisis.

As if, Seeing in the Manner of Listening…Hearing, as if Looking comprises a body of site-specific works By Cerith Wyn Evans that stimulate synaesthesia. 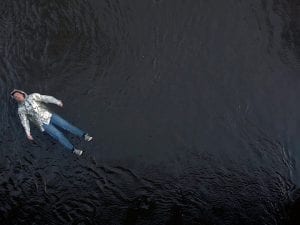 Join AAP shortlisted artists Webb-Ellis as they discuss the notion of multiple worlds achieved through documentary, performance and video.