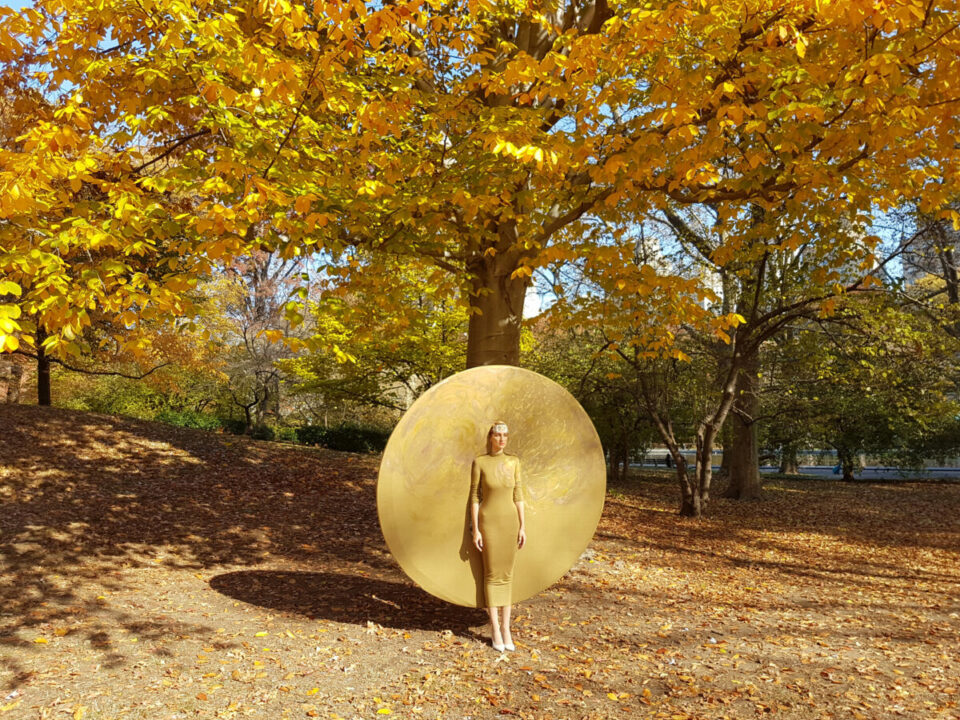 The Body Art movement developed during the 1960s. Marina Abramović (b. 1946) and Carolee Shneemann (1939-2019) are amongst its best-known proponents, creating and capturing influential performances that pushed the limits of human endurance. Many works functioned as powerful acts of protest, demonstration or rebellion, and were seen as a deliberate reaction against the male-dominated language of Abstract Expressionism, where women were often excluded from the canon. “I wanted my actual body to be combined with the work… I am both maker and image,” Shneemann once noted.

Serbian conceptual artist Milena ZeVu is part of this tradition, creating dynamic works where body becomes canvas. Driven by “a feeling that she should somehow blend with her work – and eventually become ‘one’ with it,” ZeVu began to paint over her body and clothes as if they were a single surface. The result was ArtWalks. Images from the Artwalk Cities series are shown here: large, wearable circular shapes adorned with bright abstract colours. Audiences might be reminded of Rebecca Horn (b. 1944), another artist active in the 1960s, 1970s and 1980s. Her ‘body sculptures’ – fans and prostheses – extended and restricted her range of movement.

ZeVu takes her pieces out into the public, standing in front of billboards, hotels, bridges and bustling crowds in New York, Belgrade and Monaco. In doing so, the artist disrupts familiar spaces with eye-catching and often provocative messages. One such location is Times Square, which welcomes 360,000 pedestrians each day. At times when ZeVu is ‘walking’, the journeys of passers-by, commuters and tourists are transformed. People are encouraged to stop, engage and ask questions. “For me, art happens everywhere, even at places where it is not expected to be seen.”

The concept for ArtWalks arose from ZeVu’s desire to move away from conventional exhibition spaces: so-called “white boxes” within traditional museums and galleries. It’s a conversation that has gained traction since the pandemic, with NFTs and virtual galleries taking their place as main players in the global art market. Before 2020, online sales made up about one-tenth of transactions. Now, they account for almost a quarter. Likewise, ZeVu is interested in expanding the project towards virtual worlds. “ArtWalks has no limits in space,” the artist reflects. “I have replaced a gallery wall with the streets of different cities. Recently, I’ve started using NFTs as a natural evolution of my idea, to bring art into new virtual spaces.” 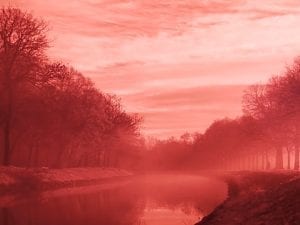 In 2018, there are over 4 billion internet users worldwide. Revealing the hidden network behind this is Artangel winner Evan Roth’s Red Lines. 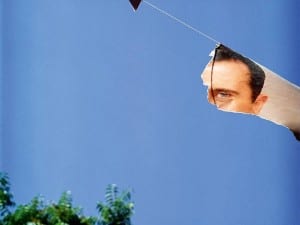 Yes To A Rosy Future is a collection of unsettling photographs that cast new light on the conflict in Syria. Nicolas Righetti arrived in Damascus when preparations for the Syrian election were under way.