Conservation and the fight for our planet occupies the front of collective minds in 2019, and artists are helping to further that narrative. Drawing conversation through art, here are five exhibitions that highlight this global emergency.

For over six decades, Roberto Burle Marx (1909 – 1994) put conservation at the core of his vibrant, immersive and acre-spanning artworks. Known for curved structures and an incorporation of native flowers, Burle Marx created the iconic mosaic walkways of Copacabana Beach in Rio de Janeiro, and the expansive rooftop garden of Banco Safra, São Paulo.

Brazilian Modern: The Living Art of Roberto Brule Marx is the world’s largest botanical exhibition and sees the lush gardens of the New York Botanical Garden burst into colour. Spiralised walkways flow between towering plants, and tropical trees burst with yellows and pinks, providing a unique escape from the concrete bustle of New York City.

Olafur Eliasson’s past works have highlighted the climate disaster by transporting tonnes of glacial ice from Greenland to London, leaving them to melt and quickly disappear in the street. His Little Sun lamp design also encouraged greater eco-friendly practices – a solar powered, tiny light, small enough to fit in your pocket.

His new major display, In Real Life, furthers this lineage. Tate is transformed into a gallery of rain, emboldened by a beam of light which conjures a shimmering rainbow. Photographs of Icelandic ice patterns taken over two decades show, in no uncertain terms, the effect of humanity on the shrinkage of the ice caps.

We have 12 years to limit climate change catastrophe, as warned by the UN in 2018. If the worst does happen, what will the years 2030 to 2100 on Earth look like? This question is posed in The Coming World, an exhibition that lies somewhere between fact and science-fiction. As the curators describe, the ecologist Paul R. Ehrlich predicted that the Earth’s oil reserves will be depleted by 2030. Meanwhile, 2100 is the date by which futurist Arthur C. Clarke, writing in the 1960s, predicted humanity would inhabit other star systems and achieve immortality.

The project opens with the six-channel video installation Purple from John Akomfrah, which uses archival and new footage to film from across several continents. The British artist has created an impressive saga about global warming and its effects on the planet’s biodiversity. Further works from 50 artists explore themes of fossil fuel dependency, deforestation and ultimately, the human-lead destruction of our planet.

Don McCullin is one of the UK’s leading photojournalists, known internationally for his engrossing frontline war photography and his ability to capture humanities strife and struggle. He’s been shot, imprisoned and has evaded kidnap, all to bring stories to the wider world. His work also showcases how the climate emergency has, through the decades, led to the potential devastation to the English landscape. His images highlight how the threat of rising sea levels and temperatures encourages mass migration and with it, greater humanitarian crises.

Danish-artist Jakob Kudsk Steensen creates a sonic and immersive environment with The Deep Listener, the Serpentine Galleries’, London, first Augmented Architecture commission. In it, Steensen addresses the threat of species extinction, social preservation and the stark reality of deforestation. Set in Virtual and Augmented Reality with an accompanying score, the show begins at Kensington Gardens and Hyde Park – the green patches of land which surround the Serpentine Galleries. Over time, as viewers stroll through these settings, they change. The air pollutes, insects and birds decline in population and trees die. 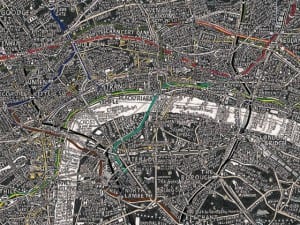 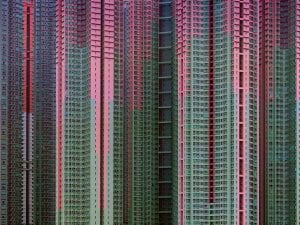 Michael Wolf documents the vernacular culture of the modern metropolis. Architecture of Density is a collection of colossal structures.