Over the last few years, renewed attention has been paid to the myriad roles of women in the history of design: from major retrospectives such as the Anni Albers show held at Tate during 2018-2019 to new texts like Jane Halls’ Woman Made (Phaidon, 2021) and Ursula Schwitalla’s Women in Architecture Past, Present and Future (Hatje Cantz, 2021), which offer encyclopaedic compendiums of female creativity.

The Vitra Design Museum’s new show Here We Are! Women in Design 1900 – Today offers a three-dimensional complement to volumes like these. Visitors to the Weil am Rhein-based institution will find a galaxy of objects on display, embodying the achievements of women across fashion, industry, interiors and graphics from the last 120 years: what it calls “a many-voiced story of design against the background of the struggle for equal rights and recognition.”

The show is envisaged as a four-part journey, starting with the development of design in Europe and North America during and after the turn of the twentieth century. Suffragists and reformers such as Jane Addams (1860-1935) are framed as “social designers,” of equivalent significance to their contemporaries in the world of aesthetics and ergonomics. The latter include Elsie de Wolfe (1865-1950), a successful actor who helped develop the profession of interior design, and the extraordinary contingent of female prodigies at the Bauhaus during the 1920s-1930s, as well as its lesser-known sister institution, the women-only Loheland School.

Group photographs of Bauhaus faculty and students never seem to disappoint for iconicity and idiosyncrasy, and sure enough, featured images include a whimsical shot of weavers in the tapestry department, crowded behind a loom with their heads resting on the horizontal bars. Other period documents include a 1906 Daily Mirror headline depicting “suffragettes who rioted in the commons and were expelled”! Amongst the artefacts on display we find Alma Siedhoff-Buscher’s (1899-1944) boat-themed wooden block game, the Bauhaus Bauspiel (1923).

Moving forwards across the interwar decades, the second section of the show takes a deep dive into the age of pioneers like Eileen Gray (1878-1976), Irish architect of the E-1027 House in the Maritime Alps, and the Belgian-French Jeanne Toussaint (1887-1976), creative director of the Cartier jewellery brand. This was an era of frequent female/male collaboration too, with women such as Ray Eames (1912-1988) and Aino Aalto (1894-1949) working alongside their partners Charles Eames and Alvar Aalto. In a pattern repeated across history, the extent of their contribution was rarely mirrored by the professional reputation they enjoyed. Nonetheless, the treasures they created survive, including Aino’s glass crockery series from 1932 and Gray’s sparsely elegant dressing cabinet, a fixture for her Tempe à Pailla residence on the French Riviera.

The post-WWII era saw a renaissance of modernist architecture and design, in the form of Brutalism Concretism, and grand collective schemes for urban life hatched by town planners and governments. But the 1950s were also an era of retrenched conservatism and gender conformity, only to be uprooted by the second-wave feminism of the 1960s and, especially, the 1970s. The shifting cultural narrative of these decades will be presented through the lens of Finnish brand Marimekko’s brightly coloured interior and kitchenware, Lina Bo Bardi’s (1914-1992) bold neo-Modernist furniture and building projects, and the angular, fluorescent constructions of light artist and designer Nanda Vigo (1936-2020).

Alighting at the present day, works like the Shimmer table (2019), by contemporary designer Patricia Urquiola (b. 1961), will be displayed alongside objects occupying the fringes of art, design and activism, by innovators such as text artist Barbara Kruger (b. 1945). The curators dip a toe into marine and ecological design, too, foregrounding the work of Julia Lohmann (b. 1977), a polymath and teacher whose research into marine algae may yield new sustainable materials. Questions of race and exclusivity are also touched on, with the Matri-Archi(tecture) collective creating a work especially for the exhibition exploring the experiences of African and Black designers.

Here We Are! Women in Design 1900 – Today runs at the Vitra Design Museum until 6 March. Find out more here. 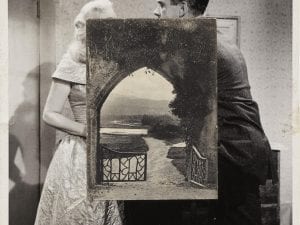 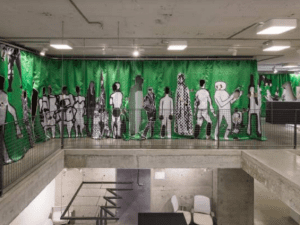