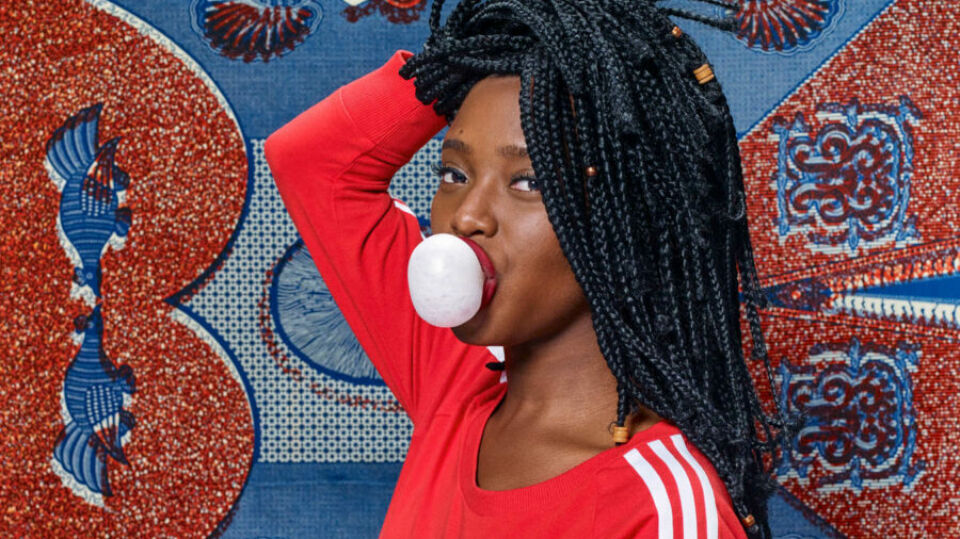 In 2010, at the age of 15, Tony (aka Zipho) Gum (b. 1995) emerged onto the scene with an art blog posting pictures of herself, using photography as a way to connect with the world and take up space. Through these creative, yet defiant, images, she critiqued the commercialisation of contemporary media, and crafted a new visual narrative entirely. Twelve years later, Gum is the subject of a major solo show, Milked in Africa.

A: Who, or what, do you continue to be inspired by?
TG: I am inspired by God first and foremost. Family, too, is very important. In my culture we have “tribes” and sub-groups, and AmaXhosa are amongst these. When we identify where we come from, we say “ungumamni?” and that essentially means “what are your clan names?” So ooMpinga, ooBhele, ooJola, ooMokoena are the people that I come from. We start at the beginning. I am also inspired, of course, by my people: Africans, South Africans, Black and Xhosa women.

A: Despite being called the “coolest girl in Cape Town” by Vogue, is it true that you’ve often been wary of calling yourself an artist. How important are these definitions?
TG: It’s not necessarily that I am wary of being called an artist, but I don’t want to be prematurely confined to a certain walk of life. I’m not a person who necessarily likes to conform. It’s not even a matter of liking, it’s not in my nature. So, I call myself an “artist in learning” because that lends me the room for learning and adapting to whatever I may feel inclined to at the time. I shy away from definitive terms so that I don’t have to feel stuck. However, I also respect artistry. I come from a background of artists, such as my uncle / cousin who is a fantastic fine artist. His name is Mongezi Gum. With the knowledge of people who have been in the field and practised for many years, I believe it is insincere of me to thrust myself into being called an artist when I believe it is a journey which you have to earn, not just walk into prematurely.

A: Do all artists need to consider their own value systems, questioning the sector and their wider place within it?
TG: Artists are constantly having to renegotiate their values. We are creating work for ourselves, primarily, and for our immediate audience, but this ripples out to broader viewers, which we may not directly or indirectly want to communicate with. That is, I guess, the risk you take in being a creator. You are at the disposal of the opinions of others. I believe that believing in yourself, 100 per cent, is crucial for our survival. If you do not have a certain grounding, it is very easy to lose sight of yourself, and, in turn, that also affects the quality of your work. Even as we are living, and evolving, in a modern- day world, there is a part of yourself that needs to hold true to tradition: in culture, in the self and history. It is imperative to solidify your self-worth as this helps you to navigate the industry whilst allowing room for your own kind of evolution.

A: Your interrogation of beauty standards is linked to the idea of self-worth. Why do you create self-portraits?
TG: I am hesitant to describe my work as self-portraits, because there is a distinct difference in pictures that I would take of myself – me being me, just Zipho, the girl from Cape Town. There is a distinct difference between that and the portrait: the representational person or narrative that I get into “character” for. These images are quite determined as a deliberate removal of the self – whether that is by painting my skin a certain pigment, or including a certain adornment or attire that is quite distinct and pertains to a certain subgroup or subculture. These pictures are not a portrayal of myself. However, I am very inspired by the art of self-portraiture; my practice has stemmed from that genre.

A: How do these images relate to your sense of self?
TG: When I was younger, I was interested in placing myself in front of the camera. My relationship with myself, at the time, was quite volatile. I didn’t enjoy who I was, or how I looked: the skin I was in, my features, my hair texture. I was consuming a lot of media – watching TV, being on the internet or browsing through magazines, but these outlets didn’t represent a likeness, and that, of course, indirectly affected my relationship with myself. This devalued my understanding of beauty standards. Taking pictures was an act of defiance, in a way. Some people have likened me to Cindy Sherman, but I don’t see the relevance. Whereas, with the likes of Zanele Muholi and John Yuyi – these incredible artists of colour are pioneering placing themselves in front of camera to express a bigger narrative. I also enjoy the kitsch aesthetics of Nadia Lee Cohen, and, of course, the quintessential Frida Kahlo.

A: Beyond the accessibility of selfie culture – what does the self-portrait mean to you as a genre and a medium?
TG: I believe that, it, perhaps, ignites a sense of empowerment, even though it does pivot into weird dynamics on social media, which depletes and warps the sense of self. We, as Black female photographers, have infiltrated that sphere, so, on balance, it lends itself to more equal sense of representation. You, as the person taking the selfie, are empowering yourself within this cultural reset. Anything that is man-made has an expiry date, yes, but selfies give us access.

A: How did the Black Coca-Cola series begin – and how has this fed into your wider success as an artist?
TG: Honestly, I was bored. I was playing, essentially. I decided to put a crate of empty coke bottles on my head, which I had seen in the backyard. I was quite inquisitive about the drink, because I grew up in the Seventh-day Adventist Church, and we were big on the health message. One of the regulations pertained to not drinking caffeine. In the township, coke is a cult classic – and a drink of the culture. If you see a brown, fizzy substance, you immediately associate that with coke. It’s a drink that is part of every experience – whether we are mourning, or celebrating birthdays and weddings. It’s in every corner store. I never consumed it, but it was very much in my world. I knew it was the Black people’s drink, essentially. But I was always puzzled by the fact that Coca-Cola has not, yet, done a campaign to celebrate their biggest consumers. I figured Black Coca-Cola needed a Black woman, and that became the tagline for my piece. The work, through my lecturer, Dr Ashraf Jamal, introduced me to my gallerist Christopher Moller, which is how my career started.

A: In your images, you often “rework” other classic west- ern brands. Where does your interest in brands originate?
TG: The culture of modernity is really big – especially in this third world country. We have a really big class divide. It’s not like luxury brands are foreign to us – they are not out of reach – but brand culture is huge, even in the middle to lower class communities, because in a sense, it adds to the perceived value of the person, especially when the apartheid system was ruling out sub-divisions – moving people out of their homes. The value system of a Black person in South Africa has diminished to a level that I don’t even know how to describe. Post-apartheid, 28 years into democracy, we are still living within infrastructures that were meant to dehumanise. Black people are predominantly still the lower class, and the divide is still as rife as it was, even worse, perhaps, with the levels of unemployment and displacement. People are still living in these temporary structures, which essentially are permanent homes now for a lot of our people. We are dealing with a society that is very traumatised, and we have a warped relationship with our sense of self, finding material value with big western brands. People can be living in a certain infra- structure, but will definitely have Louis Vuitton shoes, or a top.

A: In what ways are you creating a new conversation?
TG: We were stripped of our identity, and sometimes, the only way to hold onto yourself is to dress yourself up. Brands are about presenting yourself with “Isidima”, which, means a sense of dignity and pride. It’s become superficial, but it started as an act of defiance. The apartheid government put us in unliveable circumstances – but we still dressed up to the nines, making sure we were respectable and reputable, because they couldn’t take that away from us. I’m not creating a dialogue, rather, I’m echoing a message of self-worth. We don’t have to prove ourselves through clothing anymore.

A: In the Milked in Africa series (2016-2021) you focus on an entirely different liquid: one that has more ancient symbolism, and acts, here, as a metaphor for the “pervasiveness of post-colonial agenda.” Where did the inspira- tion for this series begin, and how did it develop?
TG: The inspiration came from Vladimir Tretchikoff’s works – his depictions of the female body. Of course, he was a white man painting women of colour, but there was a beautiful richness in these paintings, something very womanly. The pigment he chose to colour them with doesn’t speak to a specific identity or people or class of people. It was almost ambiguous, and I enjoyed that. Being a modern-day woman, I have this push and pull – wanting to develop in society, but also feeling as though my traditions and cultures are not being respected. If they are highlighted, they are then commodified, and that transcends to the resources of this continent. We are literally the richest continent in terms of resources and minerals, however, we are one of the poorest, and it doesn’t add up. There’s a deep desire for Africans to realise that they are the “milk” which everyone is thirsty for.

A: How important is it that your works are relatable? Is there a particular audience that you’re speaking to?
TG: My primary audience is my people: Black women, Xhosa women, South Africans. But I’m sparking a lot of conversations with people across the globe, and it’s beautiful to hear that individuals connect with the work, even though they may not be of the same culture or tribe. We all are humans at the end of the day, so there is always a link, especially when covering relatable topics. When we are discussing displacement, or feeling exploited, it’s relevant to all Black people. 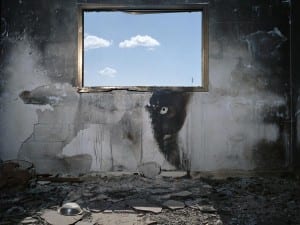 Ostkreuz celebrates its 25th anniversary with two exhibitions in Paris: one at the Goethe Institut Paris and a second at the Galerie Passage du Désir. 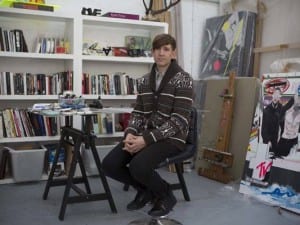 Artist and designer Stuart Semple has utilised his artistic eye to create a cardigan, in collaboration with Aubin & Wills. Semple’s project has history and thought sewn into each seam of the item. 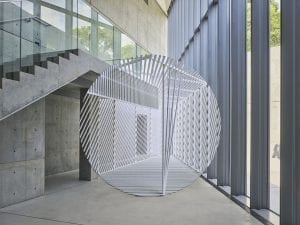