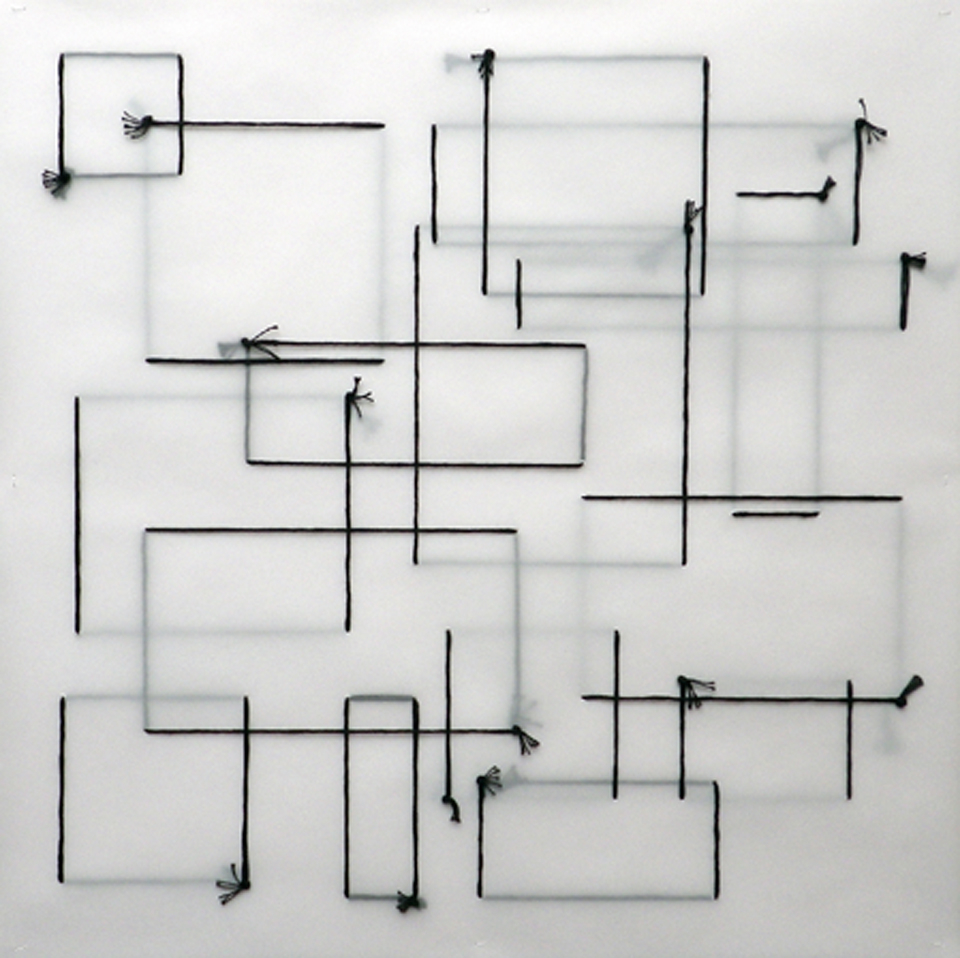 In conjunction with the Aesthetica Art Prize exhibition earlier in the year and our current call for entries for next year’s award, we look back at our interview with 2015 finalist Saliha Elhoussaini about her intricate drawing series Interdependence. Shortlisted in the Painting and Drawing category, Elhoussaini’s work reflects on aspects of the Chaos Theory. Her seemingly plain compositions, constructed using layers of tracing paper and thread, investigate the notion that simplicity gives rise to complexity. Through carefully plotted markers and lines, the artist presents a symbiotic relationship between the front and reverse of each drawing; reiterating Chaos Theory argument that everything affects everything. Elhoussaini describes her work as “deceptive” in the way that different viewpoints alter the visualisation of the image, from solid lines to fragmented gestures.

A: What inspired you to create the Interdependence series?
SE: Interconnectivity plays a major role in systems and I wanted to exploit that. The thread allowed me to physically unite the front and reverse of a surface in a way that conventional painting and drawing could never do. The first few pieces I made were on canvas and card which meant the front and reverse would need to be viewed separately. Discontented, I told myself “I wish I could see the front and reverse simultaneously” and immediately I felt a rush of excitement, as I suddenly realised how to resolve this visual problem; I needed to experiment with transparent materials. I wanted tonal contrast between the front and reverse compositions and the semi-transparent properties of tracing paper which I had been working with in the past for the pin-prick drawing series was the ideal material to achieve this effect.

A: Can you talk about the techniques used in your drawings?
SE: My work is process led. I start off with graph paper on top of the tracing paper. Using a safety pin pencil, which I made myself, I punch the outline of a geometric composition. Then using the over-under technique I sew stitches on both sides. In some works, the raised stitches on the front follow a geometric pattern, whereas the reverse stitches are applied in a seemingly random manner. However this is not always the case as can be observed in Over-under Spiral 1, where the application of one basic rule, the spiral, generates an intricate geometric linear composition within the outline of an irregular polygon. In some works I use several layers of tracing paper to achieve several shades of grey; the thread lines fade more with each layer added, creating a mist of tonal gradation which resembles a graphite drawing.

A: Your work visualises aspects of the Chaos Theory. How does Interdependence reflect this complex ideology?
SE: Chaos Theory is the turbulent side of geometry; the thread that is woven in to the fabric of the universe. Chaos explores the transitions between order and disorder. However, disorder is not really random, just unpredictable. Chaos Theory is a broad topic and I’m visually exploring some of its elements; interconnectivity in systems, progression, order and disorder.
A symbiotic relationship exists between the front and the reverse in all the thread drawings; they create each other. In some works the reverse composition is seemingly chaotic and the front is orderly. Every stitch applied determines where other must go and the accumulation of all the stitches results in a complex matrix. However, in other compositions the disorder is executed differently as can be observed in Complete, incomplete quadrilaterals 1: the muted lines on reverse which complete the overlapping squares and rectangles recede in to the background, thus resulting in a seemingly fragmented grid. In Grid verses Herringbone 2, it is all about order and interconnectivity, however, the transitional stage between the grid and herringbone can be optically unstable.

A: As a shortlisted artist, what does the Aesthetica Art Prize mean to you?
SE: The Aesthetica Art prize is such a prestigious competition and I am really honoured to be part of it. I am absolutely thrilled to have my work selected and acknowledged. This is a fantastic opportunity for gaining exposure and creating new contacts, and hopefully opening the door to other future projects. Ahead of the show at York St Mary’s, I felt nervous and excited.

A: How does this work connect with your other projects?
SE: I’ve explored the notion of drawing through various mediums including Indian ink pens and pin-prick work, where I punch holes through the front and reverse of tracing paper and other materials. Now I draw with thread on tracing paper. I continue experimenting with different materials because I always find it exciting to challenge their original function. Although the core research enquiry has been the same for a few years now, I’m not afraid to branch out when the need arises as I have done with some of the works inInterdependence. By allowing myself the freedom to diverge and expand my ideas I am more likely to discover something new; I am addicted to serendipity, and that’s what keeps me going.

To find out more, visit www.espaciogallery.com/saliha-elhoussaini.html.

19 days remain in the Aesthetica Art Prize 2016 call for entries. Artists are invited to enter the award by 31 August to be in with a chance of winning £5,000 courtesy of Hiscox, group exhibition and editorial coverage in Aesthetica Magazine.  See more at www.aestheticamagazine.com/artprize. 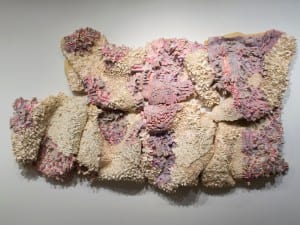 American artist Margery Amdur blurs the boundary between painting and sculpture. We speak to the artist about her interest in the embellishment of the everyday and attraction to tactility and repetition. 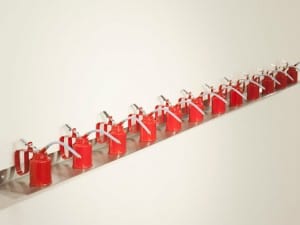 We interviewed Art Prize finalist Saliha Elhoussaini about her intricate drawing series Interdependence. Elhoussaini’s work reflects on the Chaos Theory and the interconnectivity between events. 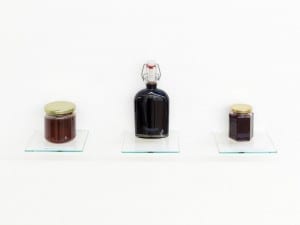 Vera Drebusch has been shortlisted in this year’s Aesthetica Art Prize. Her performance pieces Preservation and Chocolates can be seen in the Art Prize exhibition, on display at York St Mary’s.