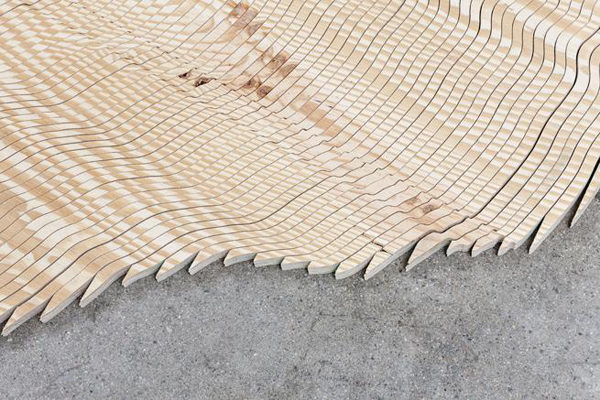 There is only one work hung on the wall in Tauba Auerbach’s exhibition in the Lower Gallery of London’s Institute of Contemporary Art. The exhibition is the New York-based artist’s first solo show in the UK and the work in question is a C-Type print, which, taken at a distance, presents as a plane of fluctuating, greyish blue tones.

The image resembles at the same time, a pool of water (a square puddle on the wall with regular, rippling watery reflections and distortions) and a digitally manipulated abstract. This latter manifestation is reflected in the title Prism Scan II (Cross Polarized Mesosiderite) (2014).

The image’s duality demonstrates a commonality between the organic and the digital. The processing the picture has undergone has changed it from a (presumably) clear depiction into a distortion that contains all of the data of the original, but makes it unrecognisable, just as the image of the world is changed when it is reflected in the surface of a puddle.

“Ambidextrous” in its common usage refers very specifically to a person who can use (or a tool that can be used by) the right and left hand equally, but broken down, the term takes on a second meaning. Latin in origin, the prefix “ambi-” in this case means “on both sides” whilst “dexter” means “right-handed”. Taken together, the phrase (right-handed-on-both-sides) assumes right-handedness to be the default, and a right hand becomes as well defined by its attributed characteristics as its location. The definition very quickly subsumes its origin.

In front of the print, not raised far off the floor, on a long, low plinth is Square Helix (2) (2014). Laid together on the plinth are two aluminium rods, powder coated so that they take on a plastic-y texture, one in bright orange and the other electric blue. They have been shaped into a regular, repeating pattern that finds them intertwined, but never touching – eminently separable, but clearly in unison in their echoing undulations.

The effect is repeated in Latch (2014) and Knit Stitch (2014), which at the other end of the room are on ever-taller plinths (stretching the composition of the exhibition vertically). These two works however, appear more immediately interlinked; the tessellations of their components form catches, calling into question, albeit briefly, whether their separation is possible, and encouraging the viewer to cognitively disassemble and reassemble the dual aluminium parts of the piece.

Like the two ambidextrous hands that are defined as only one hand, the two elements in each of these pieces are equal reflections of one another, but they imply something singular. They are reflections of the same single element, rather than two separate objects or forces – a single sculpture made up of two equal parts. For this reason it is impossible to conceive which of each pair is the right hand, the one that precedes and defines the other.

This principle of connection is stretched further in the exhibition’s title pieces The New Ambidextrous Universe III and IV (2014). Two slabs of plywood laid out on the floor, each with two patterns running in tandem on its surface. The first pattern is the naturally occurring grain of the wood, the second is a series of score marks; the wood has been cut into thin slivers. This second pattern ensures that the piece is now lots of irregular cuts of wood rather than one singular slab. The first pattern, the grain of the wood, visually reconnects the pieces, which unlike the scrambled data of Prism Scan… remain ordered.

Leaving the exhibition and walking the gallery that leads to the ICA’s café, the exhibition cannot be seen as a whole. Auerbach has installed a series of equidistant MDF boards. They act as dividing lines that distance the viewer from the show (you are no longer in it, but viewing it from the outside) and separate the space, sectioning the exhibition (the pieces already diagrammatic in their recurring, reflecting and tessellating forms) into an additional series of slices and diagrams. 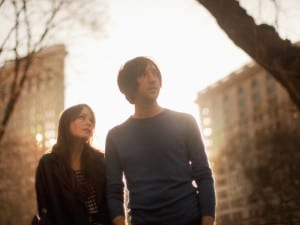 The Hundred in the Hands’ first full-length album, retains the excitement and fervour expected of a debut, while creating a practiced, coherent sound. 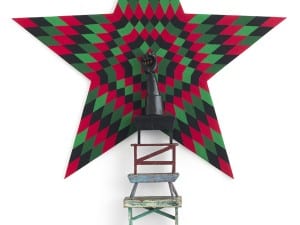 Nick Cave’s self proclaimed role as a messenger is amply evident from his exhibition titled Made By Whites For Whites at the Jack Shainman Gallery, New York. On view until 11 October. 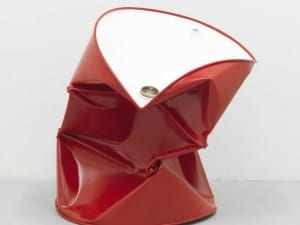