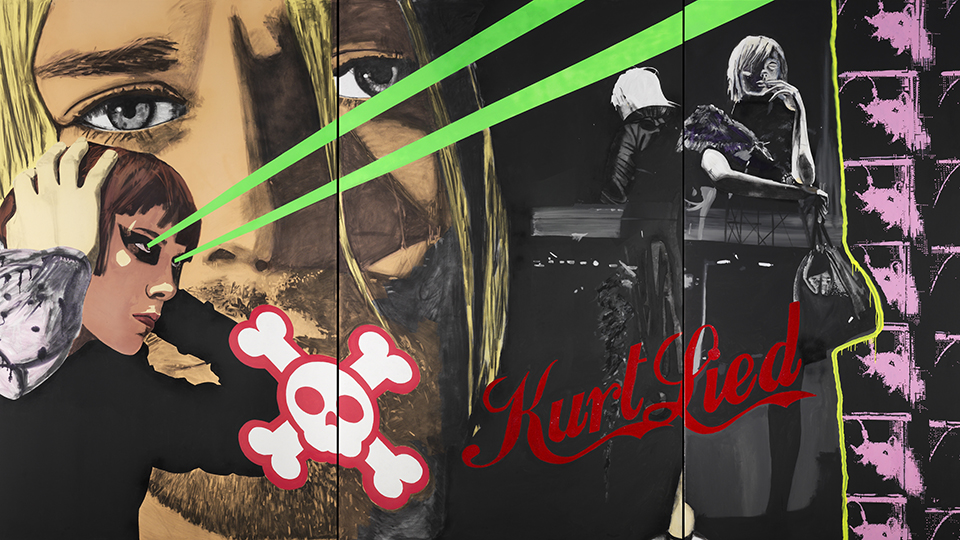 At only twenty-six years of age, Stuart Semple is one of the most exciting young British artists around. He fuses 80s influences with an informed view of popular culture, especially the art of advertising.

Stuart’s inspiration to paint came from serious circumstances; “At 19 I had a medical issue, which resulted in me being seriously ill. It made me realise just how fragile everything is. This experience is underlying in all my art, I had to get the fear and anxiety out of me and I did this through painting.” This near tragedy was an extremely upsetting time for Stuart, his family and friends. After this, Stuart began selling his art via the Internet, and since then he has taken a non-conventional route into the art world, where he has established himself as a prominent artist.

Stuart’s work contains a large amount of 80s and 90s youth culture references, including song titles and iconic figures such as Kurt Cobain. “We are all surrounded by the language of popular culture; billboards, music videos, fashion magazines. The advertising looked very slick and the language of popular culture is useful for me when describing an idea. Kurt Cobain; everyone knows what he did and what happened to him. What I am doing is remixing these icons and popular culture. I find the re-mixing is really important as we are force-fed celebrities in music videos and photo shoots, it is all very inspirational and it is empowering to remix these ideas. In the 80s, I wonder how many people watched Madonna who came from nothing singing Holiday and wanted to be her. People are striving for the perfection that is in these videos, when there are simpler ways to find pleasure in life.”

The 1980s were a highly-charged political era, growing up during this period had a pro­found effect on Stuart. “It was a fascinating time. When her Magginess [Margaret Thatcher] said that there is no society it meant that people became so atomised and disparate, all trying to stake their claim on something. This kind of existence is lonely so people want to grasp onto popular culture in order to feel connected. It’s the idea that people are going into the office reciting lines from sitcoms to each other in order to feel some sort of connection. In the 80s, with the advent of music videos, popular culture became an escape. These images and ideas helped people transcend the poverty surrounding them and inevitably made people want to escape their surroundings.”

Stuart’s paintings are far more than re-mixing; they address ideas which immersion in popular culture sparks. Utilising captions from song titles and strong visual imagery you cannot help but stare. “I have a database full of captions, every one comes from a song. When I make a painting I live with it for a month or so. I do the painting first and then the caption that I put on may not be the one I had originally thought it would be. I want the title to add another emotional dimension to the painting.” The results are works that fuse contemporary figurative painting with pop art. “I identify with people in paintings. Humans interest me; they die, and have emotions and feelings. Even the slightest change in the way a hand is painted can cause such a different emotional response. I did not even realise that what I was doing was figurative painting. It was only when I was approached for the Liverpool Biennial (2006) that I became aware. I express my feelings into model painting; I situate them into the cultural landscape, which surrounds me. If I’m painting someone I have to relate it to what surrounds them, so what they are listening to one their Ipod and not a country or landscape setting as this is not relevant anymore.”

Although Stuart’s paintings inspire comparisons with Andy Warhol and Jean Michel-Basquiat, he is more informed by their legacies. “I can see similarities in my art, but it is not a defining influence. I am influenced by Radiohead, Blur and Rage Against The Machine, they have things that resonate with me, they are my heroes. I love art, it is my obsession. Inspiration does not have to come from art. I’m more like Thom Yorke than Andy Warhol, he wasn’t a painter and he didn’t get dirty. I work much more like a musician than an artist.”

Stuart is an artist who always seems to be diversifying into new areas. In February 2007, he launched the Rebels and Devils clothing line, which include a range of hooded sweatshirts bearing striking images of iconic figures such as Edie Sedgwick and Syd Barrett. “Edie, Syd and the others were people that I wanted to use for a long time. The hoodies were more sculptural. I wanted to spend some time away from the canvas and this gave me a few months to do that.” Stuart’s talent is being recognised on the international arts scene. “I curated the show at the Anna Kustera gallery in NYC [with Ju$t Another Rich Kid]. I didn’t think anyone knew who I was and when I got there and people were spilling out onto the street and queuing to get in. It’s weird because you’re working fourteen hour days in the studio, and then when you pop your head above the sand for ten minutes there are all these people waiting to see you.”

Stuart’s most ambitious solo show to date; Fake Plastic Love is presented by Martin Summers Fine Art Ltd andtakes place at the Old Truman Brewery during Frieze Art Fair 2007. “I really wanted to do something different. The new paintings are 20 feet long and 10 feet high. For the last six years I had one format, my canvases were 120cm by 120cm squares and they evolved for a while, but then I was stuck. I wanted to extend my practice, so I decided that I would increase the scale. On the big canvases everything looks gestural they are physically large. Everything involved should be emotional, the images that I have created and the scale was vital to achieving this. I like the idea that they are large, and I think that art should be entertaining. It’s about being playful and putting the art into a different territory.” This expansion of Stuart’s practice shows that he is an artist that is continually developing and finding new challenges. “I hope that people will see diversity in the paintings. I’ve included several different techniques, and I hope people feel that time can be spent with them.” Stuart Semple is an artist who is constantly striving to evolve; his paintings are subversive, intelligent, imaginative and well worth a spending time with. 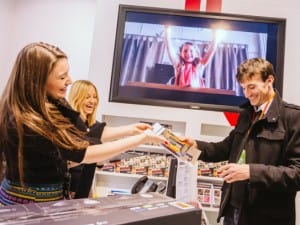 The ASFF 2014 Festival Hub is Officially Up & Running

Taking place across the city of York, ASFF celebrates independent short film from around the world. This morning, the team opened the Festival Hub at Visit York. Audiences will be able to purchase and pick-up their festival passes and tickets every day from 9.00 until 17.00.