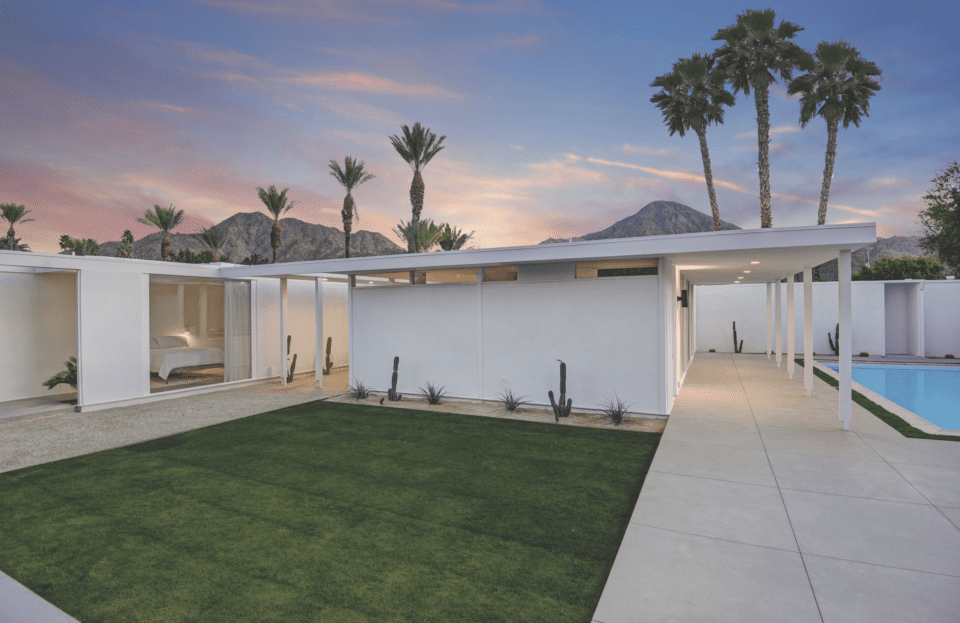 Architectural modernism has evolved across the globe largely since the post-war period – design concepts in favour of functionality and social community. Stark, neutral colours, and an absence of ornamentation, swaps maximalist decoration for simplification. There are, of course, many variations of modernism and its “clean line” aesthetic across the world, from the cantilevers of Frank Lloyd Wright’s Fallingwater (1936) and Philip Johnson’s Glass House (1949) to the multi-coloured housing project Cité Radieuse (1952) offering, as Le Corbusier proposed, “a machine for living in.”

The Coachella Valley region in southern California, from Indian Wells to Rancho Mirage, has its own particular branch of modernism referred to as “Palm Springs Modernism” – a style that has cast an elegant shadow over the contemporary spheres of art, music, cinema and architecture over the years. Here, glass, steel and stone sit in sharp contrast against cacti and entrancing blue skylines. Palm Springs’ Modernism Week (held over 10 days each February) is said to be the most popular modern architecture event in the USA, featuring more than 350 events from home and garden tours to lectures, exhibitions, music performances and fashion shows.

This is a world that architect William F. Cody (1916-1978) helped to create. Born in Dayton, Ohio, he moved to Cali- fornia and became a licensed architect in 1946. Soon after, Cody’s CV began to expand, including a string of interna- tionally acclaimed designs for esteemed clientele, from the Del Marcos Apartment Hotel in Palm Springs (1947) to the Haines Studio and Office in Beverly Hills (1949) and the Thunderbird Country Club complex at Rancho Mirage (1951). Perhaps most prominent was The Eldorado Country Club in Indian Wells (1957), with the low-slung grandeur and well-proportioned grace of a Greek temple, sloped upwards to the ragged spectacle of the Santa Rosa Mountains. These early structures exhibit recurring features: uncluttered façades of brick, glass or stone spreading outwards rather than upwards from succulent-speckled desert terrain. Angular or zig-zagging lines, introduced on the vertical or horizontal plane, add an extra element of expressionism to an otherwise minimalist style rooted in international modernism.

Cody’s work speaks largely to the construction of “desert modernism” – a wider mid-century paradigm that took hold in different ways across the globe during the post-war decades: from the British brutalism of Alison and Peter Smithson to the organic curvature of Oscar Niemeyer’s Brasília and the Seagram Building, New York. Architectural historian Don Choi outlines some of the key features of the Palm Springs variant in a pivotal new title, celebrating Cody’s career, published by Monacelli. In Master of the Midcentury: The Architecture of William F. Cody, Choi states: “The Coachella Valley encouraged certain kinds of developments. The climate was very friendly to indoor / outdoor living, and encouraged an emphasis on leisure. After all, Palm Springs developed after WWII as a getaway destination for Los Angeles residents, who took advantage of the warm winters to golf, swim and play tennis. Many of Cody’s interiors were open and informal, with kitchens and dining rooms opening onto living rooms. He also designed buildings in which the interior and exterior were visually and spatially connected. Sliding glass doors allowed parties to spill out from living room to pool patio.” There was also an emphasis on light and transparency in Cody’s plans, often involving large quantities of glass, made possible by forgiving weather, which was both quintessentially modernist and realised with unique success in Palm Springs. One might say that Cody helped to create the idea of open-plan living as we think of it today – a concept for the home built around maximising light and communal areas, debunking the desire for “rooms” both public and private.

Although open-plan living had been a hallmark of domestic architecture at least since Frank Lloyd Wright (1867-1959), the idea of the home as a flowing, unfolding space, where all sections were visible from all others, came into its own in the early 1950s in the sunnier corners of North America, developing across the world. In the UK, on 11 May 1964, Terence Conran launched the first Habitat store on Fulham Road, built on the idea of affordable modern furniture and “multifunctional zones” becoming the new normal. Even today, images of slick white homes, adorned with monochrome furniture, flood Pinterest and Instagram pages. Social media perpetuates ideals that hark back to Conran and Cody.

The Palm Springs aesthetic, as a whole, projected a lifestyle of ease and play, combatting the austerity and rationale that followed WWII. It is perhaps for these reasons that it continues to captivate us – in a consumer and image-led culture built on ideals and appearances. In the art world, Slim Aarons’ Poolside Gossip (1970) is one of the most sought-after images in the whole of the Getty Archive – an iconic photograph gazing over two women – a fashion model and the wife of an art dealer – as they converse next to a shimmering body of water. In the background is a desert house designed by Cody’s contemporary Richard Neutra (1892-1970). Meanwhile, David Hockney’s wildly popular west coast poolside paintings, such as A Bigger Splash (1967), encap- sulate a fascination with 1960s Californian living, depicting a built environment that is pure “desert modernism.” Two palm trees extend in the background of a block blue sky – a yellow diving board protruding from the corner – as we look out over a low-slung, glass-clad house. Splashing out on the original would set you back just under $30 million. Similarly, the dazzling architectural photography of Julius Shulman (1910-2009) offered a glimpse into mass culture across the late 20th century, so much so that pool side and fairway living has seemed a tangible if not attainable ideal for generations of Americans and a global audience. A 2008 film about Shulman, titled Visual Acoustics, celebrated his ability to capture a play of natural and built elements.

Both blockbuster and independent cinema also have key modernist references, perhaps unsurprisingly given their his- toric connections to Palm Springs and similar resort towns. David Lynch’s suite of LA films, such as Lost Highway (1997) and Mullholland Drive (2001), evoke the dreamy opulence of California’s deserts by day and night, whilst foregrounding the sleek planes and angles that pioneers like Cody defined. As the example of Lynch might suggest, the American dream that Palm Springs epitomises has also been seen as a mirage. These ideas extend to more recent streaming culture, from the black comedy Ingrid Goes West (2017), which lam- poons the influencer culture associated with selfies on Route 66 and weekend homes at Joshua Tree, to the 2020 sci-fi Palm Springs, directed by Max Barbakow, in which two stran- gers find themselves stuck in a Groundhog Day-like scenario, desperately trying to claw their way out of a desert time loop. However, the designs of Cody and his contemporaries have a value that carries beyond these contexts. “My students at Cal Poly seem to find California modernism more engaging than the US work of Walter Gropius and Mies van der Rohe,” Choi offers, with reference to the USA’s most famous European- born 20th century architects: “perhaps because Cody’s work is more connected to the way they would like to live.”

Choi highlights an important point here: the root of the Palm Springs appeal is, perhaps, in domestic spaces centred around an optimistic post-war lifestyle. The modernist movement, after all, is connected to social interaction, favouring communal environments and multi-functional spaces. In this way, the Palm Springs school adapted modernism to express a belief system that had become more ubiquitous internationally. Cody, like so many architects working today, placed the needs of the client front and centre. As Choi continues in the introduction to Master of the Midcentury: “Modernist designers in California generally showed little interest in crafting broader, theoretical arguments for architecture, pre- ferring to deal with the circumstances at hand.”

In myriad ways, “desert modernism,” and Cody’s work in particular, offered a simplistic design vision that still seduces us, countering postmodernism’s critique on formal excess. Cody’s style is also connected to classic cars and the ideal- ism of the Kerouac-inspired road trip, predicting many of the tastes and habits of 21st century getaway culture to remote minimal estates. This, of course, has its flipsides. Choi adds that “when Cody was working, energy was cheap, and most architects were revelling in the ability of technology to make the desert habitable.” The use of steel and other energy-intensive materials, of cooling systems to master inhospitable climates like the Californian desert, and the creation of homes around the needs of motorists, are aspects of Palm Springs housing that 21st century students seek to address.

On the other hand, the Palm Springs school was, in some ways, all about honouring the natural world – which explains Cody’s love of low-storied structures, often shaped to the contours of the land. Given the rise of environmentalism in the 1970s, particularly in California, and Cody’s progressive instincts, he might well have considered issues of sustainability had his career continued into today. Cody was notably interested in the experimental town of Arcosanti in Arizona, where the concept of “arcology,” combining architecture and ecology, was developed. Choi, for his part, believes that Cody “might have taken up the environmental challenge with aplomb, given his creativity and desire for constant evolution.” Indeed, Cody may well have found some intersection between elegance and ethical responsibility in 2021, combining open spaces with respect for the natural world.

In any case, the use of architecture to complement natural vistas rather than dominate them seems, in retrospect, the most delightful and farsighted aspect of “desert modernism.” We can sense this from the contemporary US design firms, such as Walker Warner, Marmol Radziner and Richard Beard, who speak of their debt to mid-century Californian design, with its emphasis on bringing greenery and the living world to the doorstep. In the same way, Choi notes, Cody liked nothing better than “seeing his buildings standing out against the backdrop of sky and mountain.” Beyond idealism, there’s lessons to be learnt in these low-slung white structures, working with, rather than against, the landscape.

Master of the Midcentury is published by Monacelli. 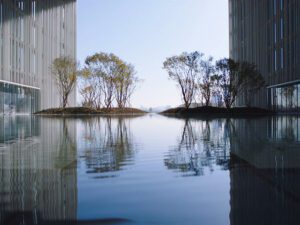 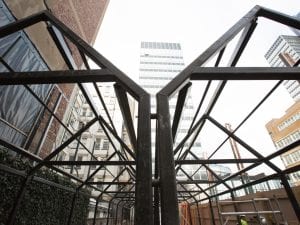 The Pilcrow pub uses design as a catalyst to build a neighbourhood. Aesthetica catches up with Director Ben Young to discuss social integration with design. 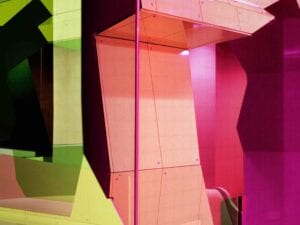