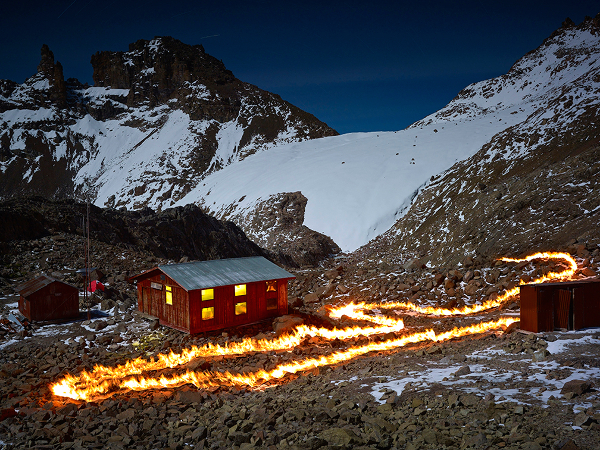 Two series of long-exposure photographs document the impress of days, months, and years on the surface of the planet, one capturing the heat and ice of Kenya’s Lewis Glacier, the second depicting the war-ravaged Bamiyan Valley of Afghanistan.

The first of these series was taken in October 2014, as Norfolk set out to record the decline of the Lewis Glacier, which has been disappearing for the past eighty years. Using old maps and modern GPS surveys, Norfolk charted the glacier’s previous edge; he then set his camera to hour-long exposures and walked the former outline while carrying a petroleum torch, photographing as he travelled. The resulting images enclose the cold ice of the smaller, diminished glacier in a fiery border, yet the dominant images which show only earth and air, are all that will remain after the doomed glacier has completely melted.

This sense of loss is balanced by the serenity of Norfolk’s photographs of the Bamiyan Valley: once famous for its 170-foot-tall Buddhas it has become infamous for its destruction at the hands of the Taliban in 2001. Over a dozen scenes are shown throughout the seasons: a pair of abandoned Soviet tanks stand in a field; rubbish accumulates, is replaced by flowers, then by snow; the field is tilled, crops grow, disappear in the harvest; a small village stands before a cliff wall dotted by hundreds of cave mouths, whose alcoves once held the statues of the 1400-year-old Buddhas.

These niches are empty now, as are the windows of many of the buildings in the nearby village – bare or covered by tarp, practical responses to the daily realities of life even after monumental loss. Despite this trauma, Norfolk’s cyclical images convey a sense of perseverance and strength, human and natural. Snow falls and melts, the leaves wither and return, the land is plowed, planted, and harvested. “The main creation of Afghan culture is the landscape itself,” the artist has said, “but one has to stop, sit quietly and take time, to see it at work.” 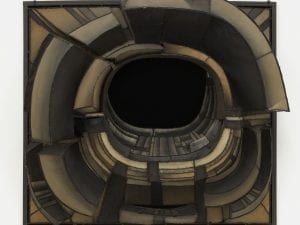 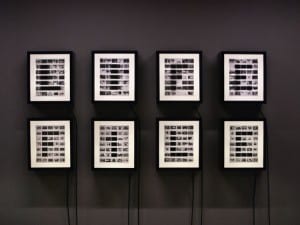 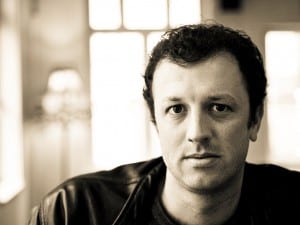