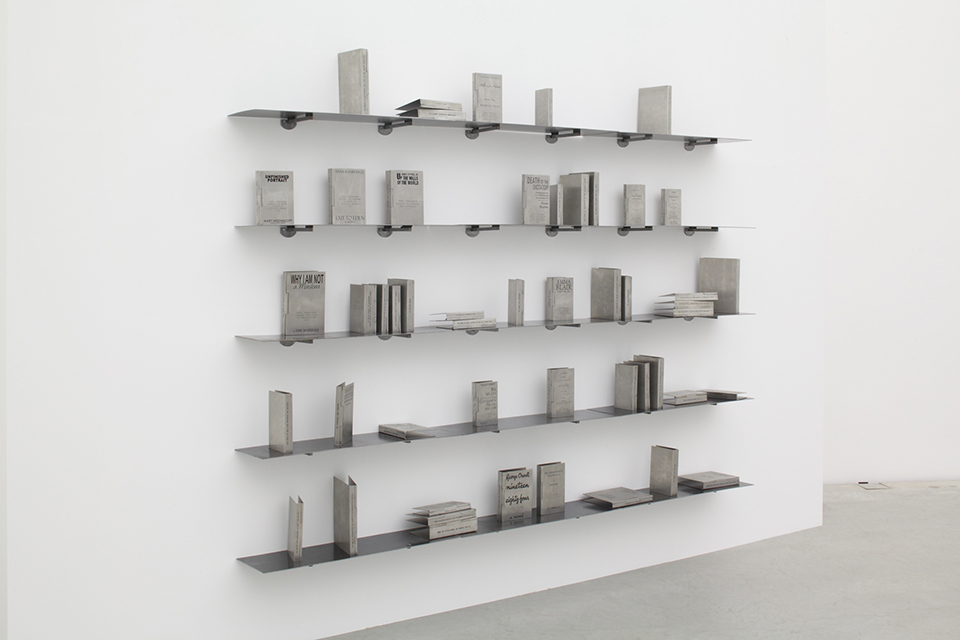 Shilpa Gupta (b. 1976) creates artwork using interactive video, websites, objects, photographs, sound and public performances to probe and subversively examine themes such as desire, religion, security on the street and on the imagined border. Someone Else ran at Arnolfini, Bristol from 3 March – 22 April 2012.
www.arnolfini.org.uk.

Can you briefly talk us through the new work presented in this exhibition?
The new work in the show is called Someone Else, which is a library of books written under pseudonyms or anonymously. There are 100 book covers in stainless steel. These are etched with the covers of the original book (often the oldest) and along with that the reason for taking a pseudonym is etched onto it. The reasons range from political ones, such as “For Fear of Not Being Able to Return Home” in the case of Ali and Nino or “For Fear of Censorship by the Colonial State” for Indian author Premchand. The three Brontë sisters are also there, who first published under the pseudonyms; as cited by Charlotte Brontë, “the ambiguous choice being dictated by a sort of conscientious scruple at assuming Christian names positively masculine.” There are in fact several female authors from the 18th century who assumed male pseudonyms and then there is also a romantic novelist, published under Emma Blair, who is in fact a male author – the reason being, in order to be taken seriously as a male writer of romance! A lot of authors choose a different name, simply “to write more” or sometimes one comes across a rather casual one “because I like banana flowers.” Amongst other things, the work is primarily about the desire to feel free without being bound under expectations and pre-conceived notions.

You are often thought of as a new media artist and not a performance artist. Do you think this is true?
Actually I’m not too comfortable even with the term new media, because it somehow privileges the “new” which can easily be mis-read as fashionable. Also the term is somewhat ephemeral, as nothing can stay new and things will always become old. Perhaps the term got attached to me in the mid and late 1990s when there was an energised environment of electronic/computer based media being used (in pockets) across the world. I personally would like to stay away from definitions and I find myself working in several “in betweens.” This would be in terms of discipline or content (about where and how lines are drawn) or notions of art object. If a term is a must, I am comfortable being called just an artist, although there are times I wish there were no such term. Perhaps something to do with being a worker as well.

Can you expand on the meaning behind Singing Cloud? Why are the microphones used as speakers?
The microphones are used as speakers, as though there has been a reversal – perhaps in a state of urgency and hysteria and perhaps in the absence of a listener. Thousands of microphones form the skin of an object, and they have started speaking and singing. This object, which is suspended mid air, has simultaneously a cloud-like form and feels like a heavy immobile creature. The work is about “flight”; about movement and inevitable migration across various lines.

Much of your work is interactive and web-based. How does the response that you get impact upon your work?
I feel that I am always looking at and absorbing how people behave. For example, the interactive video projection, Shadow 3, responded to the interface of Shadow 2, making it such that the viewer could enter and participate in the middle of the narrative. While working on an interactive project, before taking a work into an exhibition space, a lot of time is spent asking friends, family, and studio visitors to interact with a work, so that I can observe interaction and accordingly finalise the programme.

This idea of a (re)discovery of seeing is decisive when viewing your work. Could you expand upon this idea in relation to your new work at Arnolfini?
For example, in one of the works, the viewer from a distance sees a flag which is generally a symbol of a marked area, perhaps a country, and on coming close to it, reads a text which makes up the flag, and speaks of the impossibility of making markings/borders. Upon looking closer, one sees that the text is made of black and yellow tape, which is used for demarcation, on which is written “There is No Border Here.”

What’s next for you?
My next project is a solo show, which will be opening at Museum voor Moderne Kunst, Arnhem, and then travel to Cultuurcentrum, Bruges. Then I will also be showing a sound work in an exhibition at ZKM. 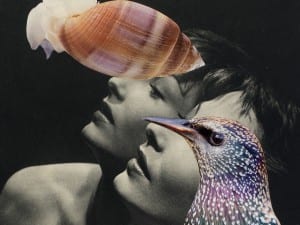 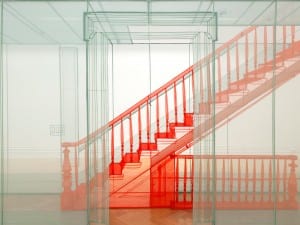