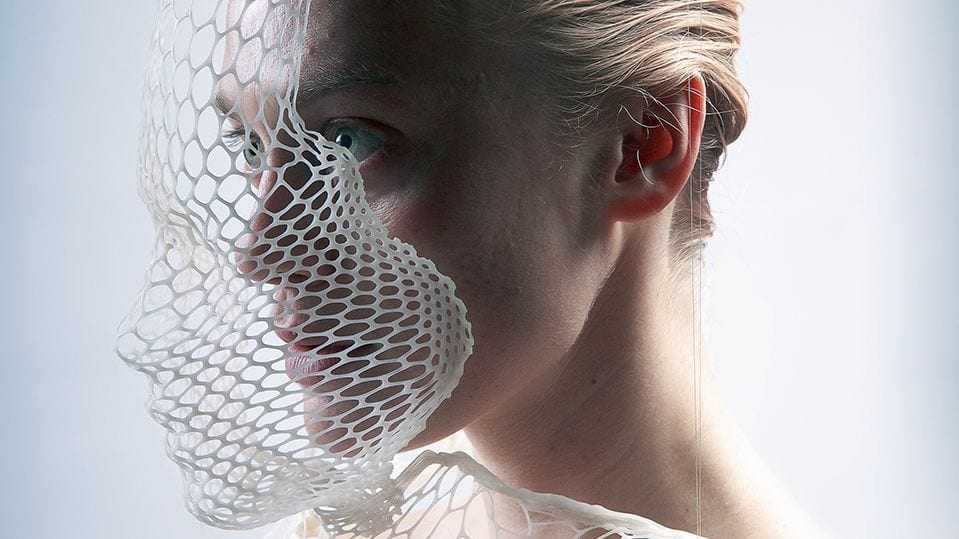 “More and more designers,” White Lines Project curator of Mode in Flux, Fiona McKay, observes, “are concerned with making fashion more sustainable and [with] slowing down consumption.” McKay identifies sustainability as a key factor behind recent interest in “making fashion work harder”, an interest that runs through the work in Mode in Flux, at Roca London Gallery. Of course, designers represent only half of the equation – the other half being the consumers and their relationship with the garments. This is especially the case with interactive or “smart” garments: as co-curator, Xenia Capacete Caballero, points out, “when the consumer interacts in a different way with the garments, that’s adding to the experience … it changes the way we interpret fashion.”

Sustainability, interactivity, and, ultimately, the wellbeing of the wearer are three focal points of Mode in Flux. Ideas around sustainability and the potential to adapt to different lifestyles and environmental demands inform many of the works in the exhibition. Designers showcased reject the notion of producing a collection once a year: “It’s quite ridiculous,” McKay declares, adding, “it’s causing nervous breakdowns in the best of designers”. Instead, they create long-lasting pieces from which the consumer will feel he or she is getting more value. This change of direction signals an increased level of empowerment for them, since they move into a position to call the shots: as Capacete Caballero points out, discussing Issey Miyaki’s Pleats Please Madam-T dress exhibited in Mode in Flux, “[i]t’s basically one single piece, but you can style it in different ways; so it’s the wearer that decides how it’s going to be worn, how it will be styled, how it’s going to be constructed.” The inherent potential in the Madam-T dress to be multi-styled and therefore worn more also contributes to the slowing down of consumption.

McKay traces the origins of the concept of multi-functionality, of converting one function to another, back to the Second World War. Arguably, the demand for innovation and adaptability during the war was largely thanks to the Make Do and Mend ethos of a society grappling with enforced thrift and harsh rationing of all manner of materials. Nowadays, the post-recession landscape is largely defined by concerns about the future of the planet as well as a desire to make money go further in a nancially bleak climate and uncertainties after Brexit. Designers such as Massimo Osti – “a pioneer,” as McKay observes, “in the area of sustainability and fabric technology” – are in turn inspired by military and workwear technology to create durable garments that challenge the kind of transience represented by seasonal fashion collections. Even though, as Capacete Caballero admits, “there [are] still not enough examples to make a real difference within the fashion industry,” the shift is undeniable.

Encouraging an ethos of adaptability in fashion is not con ned to how garments are worn or how long they last. Visionary designers like Hussein Chalayan, whose work is included in the exhibition via a series of photographs by Chris Moore, continually push the boundaries of what it means for fashion to be sustainable, the functions it can step into and carry out. “[Chalayan]’s playing a lot with different types of product design and technology,” McKay observes, “challenging the notion that clothes should stay within fashion.” Chalayan’s more conceptual, interactive pieces range from living room furniture that morphs into dresses and skirts to paper dresses that can you can write on and fold into envelopes. This playfulness is intentional but it carries a serious theme: garments are the result of an action, a part of the story of one’s day-to-day life, whatever it may be.

The quality of the interactivity of garments, whether revealing or hinting at the wearer’s emotional state, or, conversely, responding to sensory stimuli picked up from their immediate environment is a common thread running through the work of several of the showcased artists. This notion of interaction and fluidity, captured in the exhibition’s title, is another way in which the exhibits challenge the rigidity of the fashion industry and redefine designers’ relationship with it on different levels, both in the conception and in the realisation of their pieces. Emergent designers THE UNSEEN, for example, bring together scientific principles, art, and design, and use the properties of their materials in order to create, as McKay remarks, “conceptual piece[s] that [challenge] the way people think about what fashion can do.”

Mode in Flux includes THEUNSEENSWAROVSKI, a headpiece created with thousands of Swarovski black spinel stones, an element chosen for its ability to absorb energy loss from the wearer’s head. Throughout the day, the spinel changes colour from black to orange to red to green to blue to purple, thus providing a striking visual representation of brain activity – in a sense – thought. Through creations like THEUNSEENSWAROVSKI, the studio explores the function of fashion as a liminal space between the self and the world: garments and accessories are no longer superficial signifiers of socioeconomic background, but rather become the place of negotiation, the point where the internal landscape of the individual makes itself known. “These conceptual pieces can open up new possibilities,” Capacete Caballero believes. “This kind of headpiece can be used by people with impairments, [who] do not respond easily to different environments, to communicate. It might not become apparent within fashion itself, but they can inspire [ideas] in many other fields.”

Interactivity is also a key feature of designer Ying Gao’s creations: delicate, almost otherworldly garments that come to life when someone’s gaze rests on them, calling into question our understanding of presence and disappearance. In Mode in Flux, Gao exhibits her wonderfully playful (no)where (now)here dresses and premiers her Neutralité: Can’t and Won’t dresses. Made of photo luminescent thread and carrying eye-tracking technology, they glow and appear to move in response to external stimuli – namely when someone looks at the wearer – thereby implicitly encouraging interaction, even if by distance. By contrast, the Can’t and Won’t dresses, sculpted from super organza, cotton mesh, PVDF, and electronic devices, start reacting when looked at but stop doing so as soon as the onlooker begins to show an emotion. A garment that, according to the designer, “demands a level of humility clearly out of sync with today’s over-the-top expressiveness” inevitably raises questions about identity being dependent on a viewer who is outside the self: are we only there if we are seen? As long as someone is looking at us, can our presence ever be spontaneous, natural, genuine? “How we see ourselves, how we act in front of others, how we act in uncomfortable situations … Gao’s pieces are a way to visualize these notions in a physical manifestation,” Capacete Caballero concludes.

Balancing desirability and functionality is an ever-present concern for designers. In a time when wearable technology is frequently plagued by a gimmicky sheen, (the type of thing, as McKay puts it, that “people are going to look back on in 20 years’ time and laugh about”), designers need to tread carefully when developing responsive fashion: for smart garments to be fit for purpose, they have to meet consumer need, be practical, and be comfortable. Outlast, a company exhibiting in Mode in Flux, originally designed their pioneering Phase Change Materials for NASA. “When the heat increases,” Capacete Caballero explains, “the material changes from solid to liquid, absorbs the heat of the wearer and then, when the temperature of the wearer goes down, it releases the heat. So it’s very successful in sportswear production. It responds to a need and it’s practical.”

Recent trends in sci-fi filmmaking have seen the blockbuster success of films including The Martian, Gravity and Interstellar, to name but a few. It is not diffcult to identify the common themes running through these features: an isolated individual pitted against the vastness of space, being cut off from external help and having to fend for oneself, the fight for survival in a hostile environment. As well as revealing the current fascination with space and the possibility of humans inhabiting it, these works of popular culture also attest to people’s attendant feelings of dread at the concept of enforced isolation, their anxiety at the prospect of having to think on one’s feet and adapt in order to make it through. Multi-functionality is one of the ways in which designers in the Mode in Flux exhibition – and beyond – seek to respond to this kind of newly re-emergent desire for adaptability.

But a harsh environment is only one factor that might make the world hostile: the increasing feeling of isolation humans are experiencing is another. Lucy McRae’s work is particularly interesting in that it weaves both elements together, in unexpected ways. McRae describes herself as a “science fiction artist, director and self-proclaimed body architect, probing the frontiers of the body.” Her experiential installation Future Day Spa puts controlled vacuum pressure on the participant, and uses wireless technology to gather biometric data to measure the effects of the treatment. It is a spa “intended,” as Capacete Caballero points out, “for the individual to adapt to an extreme environment.” Whilst conducting a trial with over one hundred participants, McRae realised that one unintended application that her space preparation spa had was in addressing isolation: it encouraged participants to initiate physical contact.

Of all the artists showcased, Lucy McRae is possibly the artist whose work is the most attuned to the wellbeing of the individuals participating in the works. Her “complex future scenarios” provide a tool with which to negotiate isolation and survival in the present day. McKay explains the thinking behind placing McRae’s work at the end of the exhibition: “People have walked around the show thinking about all those objects that have been designed to adapt to different changes, but the final question is: can our own bodies adapt to these environments, and be trained to adapt?” At the end of the exhibition we realise this is only the beginning of the journey. Our garments are only a surface layer and making them adaptable and sustainable to our environment is only the first step. The way in which our bodies move through the world, the way they respond to, interact with, and adapt to our environment is in fact the ultimate destination. 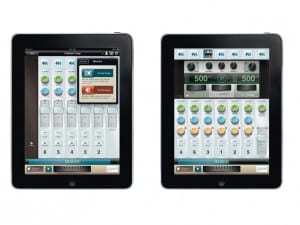 Tablets like the iPad are changing the way music is made – not only how it’s recorded, but how it’s released and marketed. We look at a real game-changer. 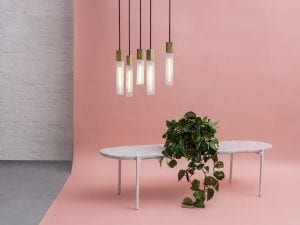