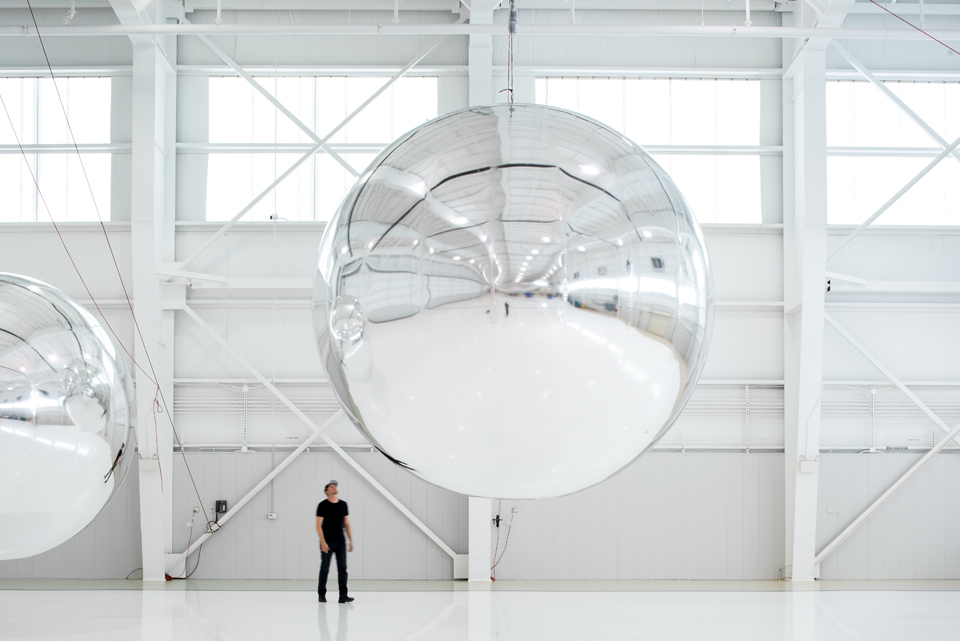 Man, machine and science: Mudam Luxembourg presents a reappraisal of the historical and continuing relationship between the arts and science.

Henri Bergson wrote in 1896 “what I call ‘my present’ has one foot in my past, and another in the future”. Ironically Bergson disdained the introduction of technology into the arts; his reading of the “present”, of a sharing of the past and future was apt though. These dialogues between the visual arts and science and technology have always been closely intertwined and an upcoming exhibition at the MUDAM Luxembourg (in partnership with the Musée des Arts et Métierss) celebrates this. Organised by Marie-Noëlle Farcy, Christophe Gallois, Enrico Lunghi, Clément Minighetti and Marie-Sophie Corcy (Musée des Arts et Métiers), the exhibition, Eppur si muove (and yet it turns), looks not just at the way artists use new technologies but how historical objects and scientific experiments have in uenced visual artists. They cite a shift within the field of contemporary art, namely: “The growing attention that artists have paid to social sciences and the way they have progressively integrated these research fields into their own preoccupations and their own vocabulary.”

Cildo Meireles’ Volatile (1980-1994), an installation using natural gas and its volatile properties; Kenji Yanobe’s Tanking Machine (1990), a tank filled with sodium chloride heated to body temperature, where the participant would float, deprived of sensory functions; Carsten Höller’s Lichtwand (Light Wall) (2000), comprising several thousand light bulbs flashing continuously at 7.8 Hz, a frequency synchronous to brain activity and capable of inducing visual hallucinations: the list of artists and specific works which take science as a basis for investigation is lengthy. The uniqueness of Eppur si muove is its emphasis on the history of this “shared space.”

Previous exhibitions, such as Jean-François Lyotard’s 1985 exhibition Les Immateriaux at Pompidou and Kynaston McShine’s Information at MoMA in 1970, have focused specifically on the innovators of the day, rather than reaching back into history to see how artists and scientists have often worked hand-in-hand or worked as both.

The “shared space” is represented in this exhibition through a collection of works on loan from the Musée des Arts et Métiers. The curators have been in dialogue for the past two years, spending time in the museum’s storage going through their outstanding collection. The result includes 19th century industrialist Charles L. Weyher’s devices for studying aerial and water whirlpools and Pierre Ernest Peuchot’s set of “interference phenomenon” paintings of 1882 (the world’s first “abstract” paintings), as well as Albert Ducrocq’s Job, an “electronic fox”, (one of the first cybernetic “robots”, presented to French president Vincent Auriol in 1953). These works articulate the “shared space” that the exhibition attempts to outline and demonstrate a kind of “infinite conversation” between artists and scientists from these different periods.

The exhibition is structured into three sections, or chapters: Measuring the World, Matter Revealed and Applied Inventions. Each chapter takes over a  oor of the museum and has its own specific core sections. Matter Revealed takes as its starting point Léon Foucault’s pendulum of 1851, a device designed to demonstrate the rotation of the earth. The Foucault pendulum was revolutionary for being the first laboratory apparatus, rather than astronomical observations, to successfully demonstrate the earth’s rotation. The interest in measuring time and space and in spatial geometry was further demonstrated and explored by artists and scientists such as Weyher, Christiaan Huygens and Louis Dupin. The presentation of these historical objects alongside contemporary works such as Christoph Fink’s The Montreal Walks (2008), a revisioning of cartography, illustrates the way that artists have adopted the sciences into their practice. Taking on the role of geographer, Fink makes clay and ceramic discs, each based on data collected on his travels by foot, bike and aeroplane. This data, from sensory observations to notes on the people he encounters, is used in his “maps”. Curator Clément Minighetti describes the results as “attempts to visualise time and space, using notations that Fink made during his travels in Montreal and Istanbul.”

The development of a standardised form of measuring began with Henri Édouard Tresca’s design for the first standard metre bar for measuring length in 1872, which is now the basis of the metric system as we know it. Exhibited alongside works by contemporary artists such as Stanley Brouwn, Évariste Richer, Conrad Shawcross, Kris Martin, and Jorge Macchi, Tresca’s metre provides a focal point for the reinterpretation and questioning of the standards and references of measuring. Brouwn’s 1 m = 1 step (1985) directly relates the measurement of the metre to the distance of the length of his stride. He references his own body (and that of his friends) to geography and distance, relating the human form to what is usually regarded as a fixed, constant science. Calling into question the science of measurements he reveals it to be a somewhat arbitrary and subjective form.
Richer, like Brouwn, is preoccupied with “measuring” and the methods of visually articulating it in a more conceptual
or exploratory way. Richer’s Mètre de mémoire, (meter “Creativity, invention drawn from memory), 2003, is as it is titled: Richer sat down and drew on a piece of paper a metre from memory. The simplicity of this minimal, conceptual artwork, is reminiscent of Walter de Maria’s Broken Kilometer (1979) and Vertical Earth Kilometer (1977): the former consisting of 500 brass rods each measuring 2m in length, the latter a brass rod inserted 1,000m into the ground. Shawcross directly questions Tresca’s metre with Measurement and Control of the Infinite (2002) and The Celestial Meters (Saturn) (2009), both addressing the precision of historical forms of measurement.

The second chapter, Matter Revealed, looks at examples and attempts by scientists and visual artists to articulate and understand phenomena such as light, sound and electromagnetic waves. The artist-cum-scientist and architect Piotr Kowalski is exemplary for dedicating most of his life to this: a graduate of architecture and science from MIT, Massachusetts, in 1952, he moved to Paris where he worked as an architect, before moving back to Cambridge in the late 1970s to run an independent faculty dedicated to scientific research and artistic activity. Sitting at the intersection between art and science, Kowalski was the 20th century equivalent to Leonardo da Vinci: a modern-day Renaissance man, Kowalski used to say: “I’m a painter of nature. Technologies are our ears and eyes to perceive the world.” Four of his important works, which illustrate just this, will be included in this exhibition, including L’Observatoire (1974), an urban planning project based around Foucault’s pendulum and designed for the La Defense quarter in Paris. One of Kowalski’s later works, Lumière (1992) presents, with the aid of a holographic device and hyperbolic screen, arainbow (arc-en-ciel): recreating an optical phenomeon within the walls of the museum. An earlier work, Mesures à prendre (1969), deals directly with electromagnetic waves, which don’t necessarily require a medium (i.e. air or a solid material) to propagate themselves. The work consists of Plexiglas plates equipped with high-frequency generators and neon pipes of di erent colours, which the audience is encouraged to manipulate. Minighetti describes the result: “When the neon tubes get closer to the antenna, they ‘magically’ emit light through the phenomenon of gas ionisation, thus making suddenly visible, almost palpable, the electromagnetic field produced by the antenna.”

Kowalski’s practice is defined by the plastic (visual) arts, architecture, and the sciences. The third chapter of the exhibition, Applied Invention, deals with this triad by examining the practicalities of its application. Broken down into six sections: Tools, March of the Machines, Production, Movement, Calculating, and The Fascination of Living, Applied Invention explores the practicality of applied scientific and artistic approaches to creating and making. A special commission by the artist Paul Granjon (in collaboration with students from three schools in Nancy) showcases this in the ultimate form of Guido, a robot, made for the exhibition. Guido will give guided tours, with a special focus on his robotic “ancestors”. Daria Martin’s 16 mm film Soft Materials (2004) will showcase his “contemporaries”;  lmed at the Artificial Intelligence Lab at the University of Zürich, the film introduces a group of robots to two dancers. Both the humans and the machines are “naked” (the machines lacking their coverings) in this slightly disturbing performance.

Such fascination with robotics and cybernetics is demonstrated by Shawcross in his kinetic sculpture Trophy (2012), a mechanised reinterpretation of Titian’s The Death of Actaeon (1559-1575). An articulated arm sits alongside a stag’s antlers, a beam of light emanating from its tip, pinpointing and tracing out the carved form of the antlers. For those unfamiliar with Ovid’s poem, Acteon turned into a stag, which the goddess Diana hunted down, and Shawcross eloquently illustrates this through the “arm”, Diana, the “antlers” her trophy. Shawcross’ work is an interesting reinterpretation of a historical painting but it almost appears diminutive next to the sculpture of the master of kinetic sculpture, Jean Tinguely. Tinguely’s Fatamorgana, Méta-Harmonie IV (mechanical sculpture) (1985) is over four metres in height and 12 metres in length and composed of three frameworks set atop old wheels. This is the largest of his Méta-Harmonie series, yet the movement sequences were made intuitively, without any planning or working drawings. Tinguely was a pioneer in the mechanical arts and the relationship between viewer and artwork, his sculptures often requiring the spectator to press a button or push a lever.

As close as the sciences and the visual arts are, there remains a strict divide between the two. Minighetti describes this thus: “two domains that have their own specificities, their own methodologies, their own economy, and their own time frames” but, and this is the essence of Eppur si muove, “science and art are the products and the witnesses of their time, but they also consistently mark, transform and shape the world in which they appear.” Creativity, invention and innovation are requisite for these two domains and they act as a bridge between the two; this exhibition simply and eloquently presents this historically complex relationship. 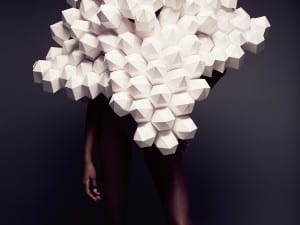 Can fashion create a better future? A new show surveys the inspiring possibilities that emerge when creativity and technology join forces.