Sax Impey is a Cornish artist, who was born in Penzance, trained at Newport in Wales, and now works in the historic Porthmeor Studios in St Ives. The Light and The Veil, his latest exhibition at the Millenium Gallery in St Ives, has one subject: The sea. Though he was within view of the sea for most of his childhood, Impey spent weeks on open water, navigating around the world’s oceans during a career delivering yachts around the world. The works in this exhibition are based upon one particular voyage off the coast of Spain.

In his paintings and drawings, Impey draws on this relentless experience of working with and against the sea and expresses the quietude, isolation and eeriness of the misty half-light of twilight and day-break at sea. He describes it as “outside of time and place.” The effect is entrancing and magical. Impey is also a skilled draughtsman and his Light (drawings) show tremendous talent as the artist depicts the shadows, the waves and smaller ripples of the water in the semi-darkness, with photographic precision. When asked if he prefers drawing to painting, Impey modestly suggests, “[Drawing] is just so direct and uncomplicated.”

His larger, painted works on canvas explore the muted colours and movement of the dark water. He uses a mixture of pencil, charcoal, bitumen, oil and emulsion paint on plywood panels, applied in careful succession, dried and then sanded down. “They tend to take a bit of time,” says Impey, “[as] the oil paint tends to be [applied in] thin glazes.” This technique, which relies on sanding down, priming or painting and drying is not unlike that of painting the hull of a boat.

Whilst hailed as “one of the greatest Cornish sea painters”, it comes as no surprise that Impey has also been compared to JMW Turner. A similar first-hand intensity can be felt in paintings by Turner who, though not a sailor himself, asked sailors to tie him to the ship’s mast so that he could see and feel the ship’s movements as directly as possible. Impey is consistent in that his painting technique, is similar to preparing a boat for voyage. He doesn’t just paint what he sees, but explores the qualities of strength or calm of the sea, noting the effect of the wind and the way that light reflects across the expanse of water.

The pinnacle of the exhibition is surely Impey’s mixed media paintings on hydrographic charts, mounted on canvas. These maps measure the depths and currents of water, as well as the topographic features of the seas and river beds. Of course, maps of this sort have been important instruments for sailors and navigators historically. By using them as a backdrop, a precise grid that is made almost invisible by his paintings of the actual ocean and its glimmering depths, Impey emphasises the character of each stretch of water, its depth and movement. The viewer is brought into the world of a long sea crossing, but also a hazardous and disorientating experience, which is also a privilege. The paintings evoke feelings of power, liberation and meditation – the calm waters also carry an element of seduction and Impey expresses this through his mastery of colours and shadows. The Light and The Veil is a group of work that can reflect and engage with the viewer in an exciting and inspiring way, just like the sea itself. 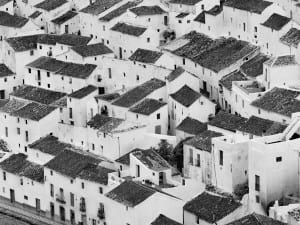 Organised by Jeu de Paume in collaboration with the City of Tours, this is the first show in France dedicated exclusively to Hungarian photographer Nicolás Muller; bringing together a hundred images and documents from the archives kept by his daughter Ana Muller.