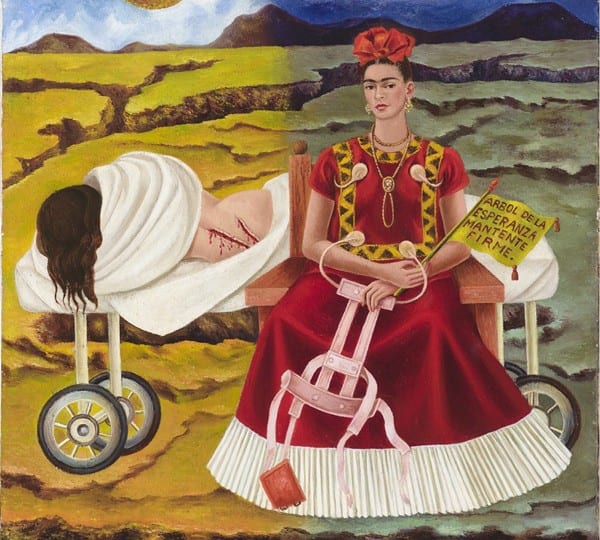 Unbound: Contemporary Art After Frida Kahlo at the Museum of Contemporary Art Chicago, running until 5 October, illuminates how the ideas at the heart of Mexican Surrealist Frida Kahlo’s paintings still resonate with contemporary artists around the world. The exhibit juxtaposes two of Kahlo’s works with sculptures, video, paintings, photographs and drawings which explore the many facets of identity.

The show is curated using four central themes: Performing Gender, The Absence or Traumatized Body, The Political Body, and Contesting National Identity. Viewers can understand each work according to its placement in the show, but also, like the title of the exhibition says, are “unbound” by any one particular theme. For example, The Absence or Traumatized Body which includes works that challenge the “male gaze,” or the millenia-old objectification of the female nude by male artists, is inextricably tied to the politics of inequality. Each piece also speaks to the more general pressure to conform; an idea central to Kahlo’s work.

In Performing Gender, artists challenge the expectation to be unambiguously male or female. French-American sculptor Louise Bourgeois’ The She Fox is a black marble and steel half-woman, half-fox without a head. Its deformed nipples and defined rib cage are clearly female, but not feminine. It’s intended to shock the viewer into questioning what it means to be a woman and the shapes associated with attractiveness. Kenyan-born Wangechi Mutu creates provocative female bodies through collage. She’s specifically interested in the postcolonial representations of black women. Tiny Split Character shows a woman who initially appears seductive, but upon closer look is made of mismatched limbs and symbols of consumerism. New York-based artist Lorna Simpson’s She presents four photographs of an androgynous figure in a traditional male suit with the word “female” written in cursive above the frame. This work displays the blurred line between gender and the performance of gender. It also reveals the complicated relationship between the body and dress.

The Absence or Traumatized Body explores the body as less of a tool for creating one’s image and more of a canvas for raw representations of physical and emotional distress. Kahlo was known for the gruesome elements in her self-portraits such as spilled blood, a chest cut open with scissors to reveal her beating heart and a ripped open torso with a glowing white spine inside. Many of the artists in this section observed and experienced pain in the body during the height of the AIDS epidemic. They express the fragility of life through representing the body without an actual figure. Catherine Opie’s In Memory/ Leigh Bowery, commemorates the loss of the legendary gay performance artist Leigh Bowery to an aids-related disease. It shows a chair draped in one of Bowery’s cloaks. The indentation of the fabric on the seat looks as though someone was once there and is a powerful representation of a missing presence. Valeska Soares’ Duet III is two marble hand-carved pillows resting on one another as though they have recently been used. It too evokes a feeling of emptiness and longing.

The Political Body deals with the relationship between power and the self. The art, once again, discusses the pressure felt by individuals to identify in a particular way, but is different because the source of the oppression is institutionalized. As a communist and Mexican nationalist, Kahlo used her body in art and real life as a medium for protesting injustice. Eugenio Dittborn’s Dust Clouds, Airmail Painting No. 99 was created during the reign of former Chilean dictator Augusto Pinochet to criticize the torture of his political opponents. The combination paint, stitching and photo-silkscreen on fabric displays vivid images of dead bodies and objects that might carry them. Sanford Biggers’ Quilt #24 is the silhouette of a photograph of a runaway slave that circulated through abolitionist circles in the 1860’s spray-painted on pieces of repurposed quilts from descendants of slaves and slave owners.

Contesting National Identity, the last room in the exhibition, is more forward looking. Unlike Kahlo, who proudly identified as Mexican, these artists deal with globalization and work to define themselves outside their country’s borders. It fits in seamlessly with the rest of the show, as the works continue to challenge externally imposed expectations. Unbound brings many seemingly different themes together to elucidate the complexities of Frida Kahlo’s work and legacy. The contemporary art deals with a multitude of issues, but it all expresses a yearning for the freedom to create one’s self. Kahlo, a visionary who refused to be boxed in, set the precedent for generations of iconoclasts to come. Her struggle to break away from that which ties one down and holds one back will always be relevant. 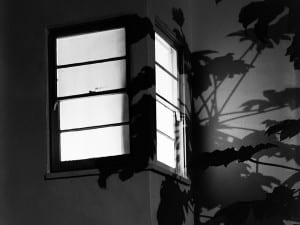 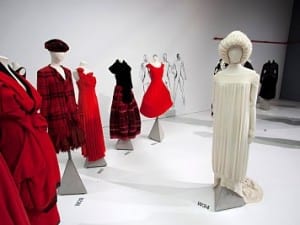 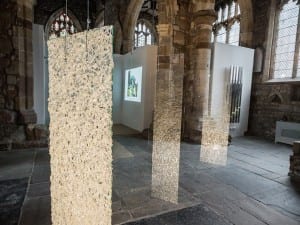 This week we are continuing our artist of the day series in anticipation of the fast-approaching deadline for the Aesthetica Art Prize. Last year’s finalist line-up included artist Kyunghee Park.