American Abstract Expressionist painter Robert Motherwell (1915 – 1991) is less well-known than his contemporaries, despite the fact that he was the leading figure in the formation of the New York School. The current exhibition Robert Motherwell: Black at Bernard Jacobson Gallery marks 100 years since Motherwell’s birth. It focuses on his black and white paintings and highlights his unique approach to Abstract Expressionist painting.

As the title suggests, the exhibition is strikingly monochromatic. Motherwell wrote: “I belong… to a family of ‘black’ painters and earth colour painters in masses, which would include Manet and Goya and Matisse.” Featured in this exhibition is Elegy to the Spanish Republic No. 110 E (1968), one of more than 150 paintings around the theme of the Spanish Civil War, which Motherwell continued to work on throughout his life from 1949. He used the Spanish Civil War as a symbol for human tragedies of oppression and injustice and what he described as: “a funeral song for something one cared about.” The works included in the exhibition demonstrate the heavy tone and sombre quality embedded within Motherwell’s oeuvre.  In Elegy to the Spanish Republic No. 110 E the boldly painted black shapes are open to interpretation. Motherwell related them to the display of the dead bull’s testicles in the Spanish bullfighting ring; they are powerful reflections on life, death and loss.

Three works are hung consecutively: Africa No. 6 (1975), Gesture Paper Painting No. 12 (1975) and Black on Black (1978). Each of these are medium sized off-white canvases with  a vortex-like swirl of black paint surrounded by drips and further seemingly random applications of paint. Motherwell studied painting with Surrealist artists Marcel Duchamp and Max Ernst and was encouraged to take up the practise of automatic drawing. These three works encapsulate Motherwell’s painterly technique. The application of paint feels raw, violent, immediate and almost gunshot-like; the influence of automatism providing insight into the subconscious mind of the artist.

The chronology of the exhibition ranges from 1958 – 1991 and works are dispersed throughout the space in a seemingly arbitrary order with pieces from 1958 positioned next to works from 1980. The decision to not arrange the works in chronological order means the exhibition does not convey the sense of development of Motherwell’s black paintings but appears like a brief meditation on this body of work.

Motherwell undertook a degree in Philosophy at Stanford University from 1932 to 1936 and later attended Columbia to study Art History. His particular interpretation of Abstract Expressionist painting is a more considered and thoughtful approach compared to many of his more celebrated associates. The 19 works in the exhibition cleverly illustrate this point. The works show Motherwell working in a range of scales. Even in the larger of the works, such as A View No. 1 (1958), the increase in scale does not diminish the level of intimacy or intensity found in his smaller pieces. When Motherwell died in 1991 Clement Greenberg commented that: “although he is underrated today, in my opinion he was the very best of the Abstract Expressionist painters”. Robert Motherwell: Black is a measured selection of the artist’s work and will cultivate a broader understanding of Abstract Expressionism for those audiences who wish to see beyond the large and colourful drip paintings that the movement is so famously associated with.

Explore the show at www.jacobsongallery.com. 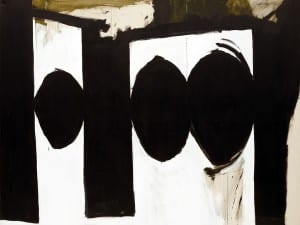 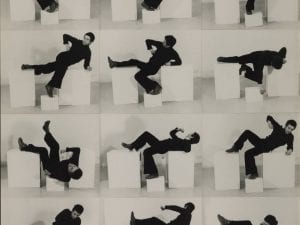 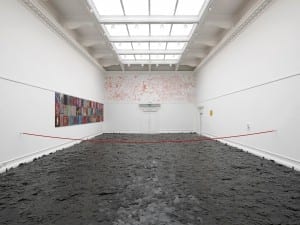 A million blacked out business cards covering the floor set the scene for this exhibition that explores ideas of exchange, and the role of regulations in determining codes of behaviour.