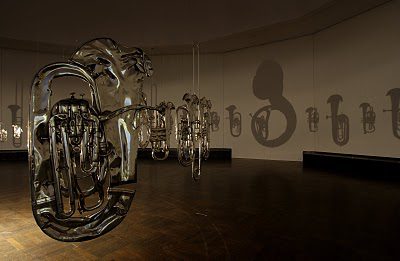 I was one of the many who wondered if BALTIC could top their breathtaking spring exhibition by Jenny Holzer, and with Cornelia Parker’s Doubtful Sound, they continue their run of immersive and thought provoking shows.

Parker’s exhibition is coupled with John Cage’s Every Day is a Good Day on the lower floors. Although infinitely varied, the theme of music runs throughout and links the centre’s floors seamlessly. Cage’s first major exhibition celebrates the American composer, writer and artist’s prints and watercolours, and has used a computerised version of ‘I Ching’, a Chinese oracle, to select the works. Cage adhered to these principles throughout his career, which have been carried right through to the ‘random’ way in which the pieces have been arranged and installed. This part of the show will be different for different audiences though, as indiscriminate pieces will be taken down, rearranged and replaced in accordance with I Ching. The absence of a sensational and epic installation in this room adds to the almost disconcerting sense of calm and space. The paintings and prints line the walls from floor to ceiling, surrounding the expanse of gallery floor.

The highlight of this exhibition is Cornelia Parker’s spectacular Perpetual Canon, (2004). The vast scale of 60 disused musical instruments from brass-bands is striking, but something not immediately apparent, is that they have that been flattened out to lose their three-dimensional quality. Being forever un-playable, there is a haunting quality to the instruments, echoes of their previous magnificence, also mirrored in their shadows lining the gallery space. Their now absent players are replaced by the audience, as the single bulb in the centre of the circle, throws the viewers shadow onto the wall in a kind of ghost-orchestra. The impossibility of the way in which the musical apparatus has been flattened adds to the surrealism of the installation. A special mechanism was used, as rollers would curve the instruments, not producing a perfectly flattened finished product.

Continuing the theme of music, albeit silent (perhaps a way of BALTIC alluding to Cage’s famous 4’33”) the most intriguing of Parker’s pieces are revealed. The Avoided Objects series contains The Negative of Whispers (1997), the negative space created by hearing, illustrated by a set of ear-plugs created from dust collected in The Whispering Gallery of St Paul’s Cathedral, London. Embyro Firearms (1995) in its’ very title brings together polar opposites and halts the creation of two guns in their most premature form of production. Continuing this premise of both sound and the materials’ history by association into the present day, Parker has created drawings encompassed in frames from wire from melted-down bullets. Bullet Drawings (2010) contain the earth-shattering noise of the bullets, trace their possible paths and freeze them in time between the glass of the frame. They encompass both the terrifying possibility and harmless futility of the metal.

Also showing until 19 September is Cage Mix: Sculpture & Sound, which presents the work of eight contemporary artists who relate their art to the scores of John Cage. A highlight of this section is Paul Ramirez Jonas’ recreation of the surface over the moon over a number of white pages, using the repetition of one sentence; “I Create as I Speak”. One page has been removed and left on a lectern for the audience to perform, showing the infinite reaches of Cage’s compositions and the effects of pushing creative boundaries.

Aesthetica relishes in bringing together disciplines, and BALTIC’s combination of sound and silence really is a sight for the senses. John Cage Every Day is a Good Day runs until 5 September. Cornelia Parker Doubtful Sound is at BALTIC until 19 September. For more information please visit www.balticmill.com 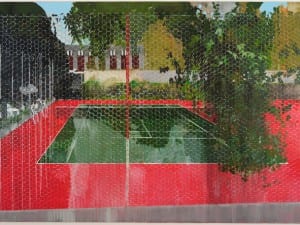 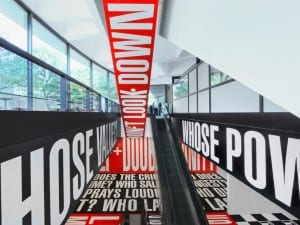 I was one of the many who wondered if BALTIC could top their breathtaking spring exhibition by Jenny Holzer, and with Cornelia Parker’s Doubtful Sound…