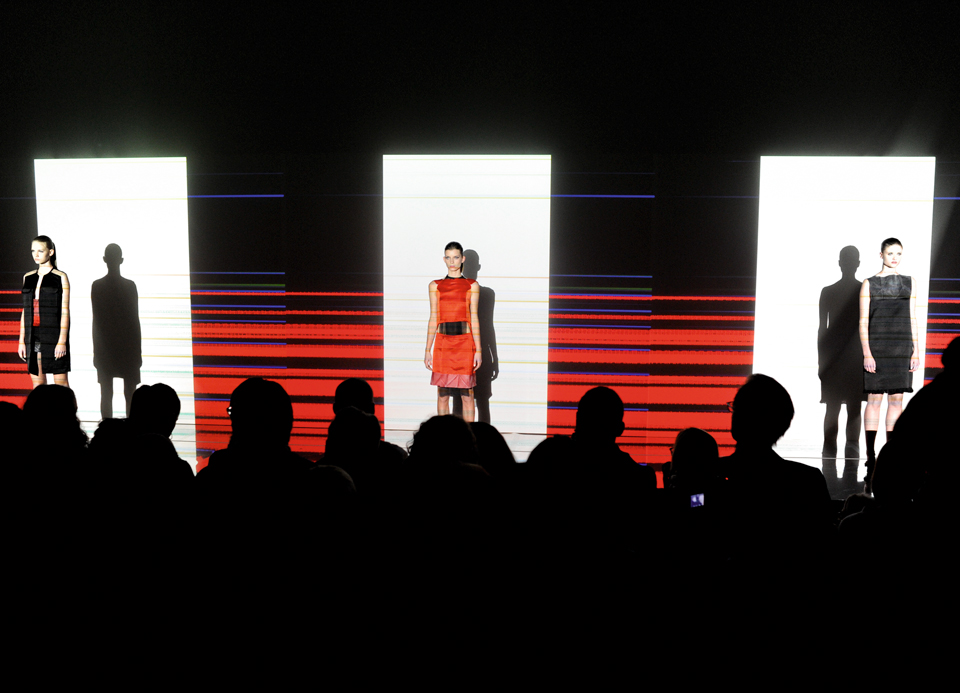 Kostas Murkudis challenges the way fashion is perceived, created and curated, through a celebration of freethinking this Summer.

Since the establishment of the ready-to-wear fashion industry in early 20th century America, and its subsequent influence in ateliers across Europe, designers have not only taken inspiration from the world around them but also from the visual arts in an effort to satisfy the constant cycle of collections and fashion shows to which the new industrialisation of fashion subjected them. From Elsa Schiaparelli’s collaborations with Salvador Dalí and Jean Cocteau in the 1930s, through Yves Saint Laurent’s Mondrian dresses, Pucci’s Louis Féraud prints and the Warhol-inspired paper dresses of the 1960s and on to the enduring presence of the pre-Raphaelites in the collections of Roksanda Ilincic today, the cross-pollination of the two worlds is manifest. The collaboration and crossover between art and fashion is a much discussed topic; however in recent decades this has reached fever pitch: with more designers citing contemporary art as their reference point in creating collections, while many artists are moving into the world of high fashion. Fine art photographers are shooting for Vogue and Harper’s Bazaar while, in turn, fashion photographers such as Rankin, Miles Aldridge and Tim Walker are staging exhibitions in galleries and receiving editorial in art publications.

This July, the Museum für Moderne Kunst, Frankfurt, celebrates the artistic outlook of German designer Kostas Murkudis (b. 1959), in an exhibition that rejects traditional methods of showing fashion in museums in an attempt to bring visitors closer to Murkudis’s creative process. Curator Peter Gorschlüter acknowledges that while “there have been artists who have already conceived fashion as some sort of art [and] there has been a longstanding dialogue between the two disciplines”, he has increasingly noticed fashion designers themselves, from Dries Van Noten to Karl Lagerfeld, referencing this intersection between two worlds.

For Gorschlüter, Murkudis still stands ahead of this more general trend. He says: “There are different ways to deal with this cross-pollination, and Kostas is one of the designers who has pushed this link the furthest, by allowing his own practice, partly, at least, to stand outside the constraints of the market place by designing unique and individual pieces.”

The liberation of Murkudis’s practice stems from his decision in 2009 to stop producing ready-to-wear collections and instead move towards an approach where each piece is individual and new. Rather than focusing on the practicalities of production and distribution, Murkudis designs clothes as original, one-off pieces instead of a response to the market. Although the exhibition is a contemporary show rather than a retrospective, the timing is ripe to explore his work because, “after five years of almost ‘artistic production’, an outstanding body of work has been created, which demonstrates continuous development and has a direct similarity to today’s practitioners across the creative sector.” Though garments from as early as the 1990s are presented as a counterpoint to Murkudis’s current practice, the exhibition highlights his progress and his contemporary output.

Gorschlüter dissects Murkudis’s professional approach into three strands: as a consultant/creative director for different brands, as a creator of his own collection, “where he is as free and as experimental as possible”, and as a collaborator with brands and visual artists. It’s an eclectic offering and one that perhaps goes some way towards explaining why Murkudis is not as well-known outside of the fashion world as designers who have explicitly taken inspiration from the visual arts, for example, Alexander McQueen and Hussein Chalayan. Gorschlüter explains: “Kostas likes to shift between different worlds: being part of the fashion circuit but also going back to more conceptual practices or working in collaboration with other labels. He’s constantly moving between them and this influences on how he’s perceived in the fashion world.”

The impetus for the show derived from the 2010 Not In Fashion exhibition at the museum that showed Murkudis’s fashion and photography from the 1990s and which also considered “something within the art and fashion scene that was not so much about a catwalk but more about street-style, finding new unconventional ways of looking at fashion and gathering inspiration from the underground.” With the growth of more edgy magazines such as The Face and i-D, as well as the rise of fashion photographers like Jürgen Teller and Wolfgang Tillmans in the art world, Gorschlüter describes it as being “a very particular time in both the fashion and the visual art industries.” Not In Fashion surveyed the moment in which Murkudis’s career was taking off – he established his label in 1994 – through a collaboration with artist and musician Carsten Nicolai. It was “not the usual catwalk show [but] a visual and multi-sensorial display, with the overlaying of images and patterns by Nicolai and a new collection that fused to create a distinct design concept.” Murkudis was on the cusp of creating an entirely new approach to the fashion cycle as well as directly challenging mass production in the industry. In 2009 he made the decision to retreat from the commercial cycle of ready-to-wear, with its mass-production and regular showings, and instead focus on pieces that enabled his imagination to run riot. When he later selected the museum as one of three recipients of his archive in 2013 (the others being the Palais Galliera, Musée de la Mode de la Ville de Paris, and Kyoto Costume Institute, Japan) the relationship was firmly cemented.

Murkudis’ interest in the blurred boundaries between fashion and art is shared by the Museum für Moderne Kunst and has increasingly become a part of the museum’s aim to expand its programming. Founded in 1991, the museum was established, as its name suggests, with a focus on the visual arts, and previous exhibitions have shown work from Martin Boyce, Thomas Mann, Maurizio Cattelan, Isa Genzken, Sol LeWitt and Gerhard Richter. However, investigating contemporary practice of the last two decades makes it clear that the scope of what is possible in the fine art world has become much wider, which has directed the museum’s programming in new and exciting ways. Murkudis’s close working relationship with the museum extended to curating the show, and decisions made on the basis of collaboration between Murkudis, Gorschlüter and Nicolai. Shying away from the traditional presentation of fashion exhibitions, they made movement and performance central themes, therefore Gorschlüter does not resort to static mannequins. Indeed the exhibition’s first room shows work “being performed and moving” on a large screen. The material and tactile elements of the pieces will be similarly prominent in a room that highlights “the idea of the micro and macro cosmos by getting very close to the textiles and then stepping back for an overview.” There is also be light projections of minute detail from Murkudis’s designs. Gorschlüter comments: “They are very intense, almost abstract pictures, but you also get a sense of the form and how material has developed.” Murkudis’s inspirations are further explored in both 2D and 3D planes through a gallery of moodboards. Gorschlüter says: “Looking at the process of his work – from selecting materials and testing images to using words or sentences – anything can generate an idea for a collection.” There is a room with objects that are part of Murkudis’s personal collection and also pieces that have inspired him from the museum’s archives. Interspersed throughout the show are creations that have resulted from brand collaborations, ranging from adidas to glass baseball bats with inscriptions like “as long as it lasts”, so that the narrative between inspiration and output is apparent before the viewers’ eyes.

The artist’s various collections will also be on display, including his 2014 4D collection in which the performance of dressing was as important as the garments themselves. Gorschlüter recounts it as a tribute to the conceptual artist Franz Erhard Walther, whose works such as First Work Set (1963-1969) presented inanimate fabric and invited participation in order to make the pieces take on a new identity. Inspired by this, Murkudis created a clothing presentation whereby “at first glance you might not realise that these are pieces to wear,” because they are laid out on the floor. Then the model enters the space and selects the garments, allowing for participation and surprise.

Although two catwalk shows will be represented, it was a conscious decision to limit the idea of the fashion show. The layout also details one of Murkudis’s more traditional Paris events from the 1990s which has been shot from the three angles: backstage, catwalk and audience. In addition, his contribution to Not In Fashion will be revived, which Gorschlüter describes as “abstract and experimental, in order to show two different styles of presentation.” Instead of focusing exclusively on catwalk shows, the exhibition contains a variety of displays in an attempt to enable visitors to delve into Murkudis’s consciousness. Some of the display also shows his object-based designs, which are free-standing in the space almost like sculptural objects. Gorschlüter is conscious of keeping the show in-line with Murkudis’s aesthetic by remaining minimal and fresh.

Fashion exhibitions can so easily fall into the convention of staid rooms stuffed with bland-faced mannequins but the ones that are really successful attempt to capture the dynamism that clothing assumes when it is worn by people, when it moves and when it’s played with. Presentations in institutions such as the V&A, London, and the Metropolitan Museum, New York, have become increasingly dynamic and ambitious, and this show continues the intriguing dialogue about the creative ways in which clothing can not only be displayed but also curated and ultimately understood. While Murkudis is not a household name, the exhibition goes some way towards bringing his works to a wider audience.

Gorschlüter acknowledges that “the show will certainly give him more exposure because it’s a comprehensive survey [and] we are an internationally known institution,” but he is clear that this is not the purpose of the exhibition. Rather, the museum seeks to “theoretically and conceptually understand fashion as art. For us, it is important to give a presence to work that we think is very interesting not only in the fashion world but in the context of visual art.”

Docks Art Fair celebrates its fourth year by taking up a permanent site. Since its conception, the event has become a centre for art lovers and this year it moves a few 100 meters to the south of the Sucrière.

Dana Lixenberg has won the Deutsche Börse Photography Foundation Prize. She is known for her work with communities on the margins of society. 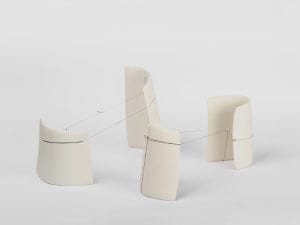 Giant Year Gallery was established in 2012 by Solan Chiu, focusing on the promotion of local contemporary ceramic art at START Art Fair 2017.