When science fiction writer Bruce Sterling introduced the notion of ‘atemporality for creative artists’ he crystallised a powerful new notion, not just in art but in life. Atemporality in his vision of web culture is a thing that allows us to reimagine history as we surf the Internet, simultaneously experiencing the past, present and future from unprecedented angles of diversity.

This idea of holistically consuming our human stories, including the many that are normally excluded from history—while it has become a normal part of daily digital living—was inconceivable in the 1980s when the Guerrilla Girls became famous for storming cultural institutions and media outlets to take on the political plight of better representation for women in the arts. By asking the spaces that write our history to include narratives that have traditionally been left out of actual and historical records, namely the voices and works of female artists and artists who are unseen or under-represented because of race and class; these pioneering activists in guerrilla suits may have been practicing an early form of atemporality.

Today, at Galerie Lelong in New York, the beginnings of a piece of that invisible history are on view. The Real Guerrilla Girls, four mysterious photographs that hang dramatically under spotlights in a room of their own among the group show Narrative/Collaborative, are the first four iterations of a long-term project by Petah Coyne and Kathy Grove, which seeks to gather and commemorate the women behind the first fifteen years of the Guerrilla Girls movement. The works feature re-photographed tableaux painted by female artists from other eras and centuries whose names are the aliases of living but anonymous Guerrilla Girls—with photographs of the living guerrilla-masked Guerrilla Girl photoshoped in. Accompanied by wall texts written by Ann Wilson Lloyd, which additionally splice the stories of these women artist couples (one living, one dead), each image is a sort of sphinx.

“In a climate where there is so much emphasis on being famous for not doing anything, these women did and do so much work without ever thinking of themselves, and they have never been given any credit,” says Coyne of the mission: “We wanted to make sure they get credit eventually”. In keeping with the mystery surrounding this movement, where the living women artist-activists highlight the dead women artists they’ve chosen as aliases, Coyne and Grove, themselves female artists, are lobbying to sell the works in this series to museums with an accompanying frame that is empty, so that the photograph they have taken of the living Guerrilla Girl, which will remain inaccessible in her lifetime, can go into the frame when she dies. In this way her identity will be revealed posthumously and she will be acknowledged for her part in the uninterrupted struggle of women to be granted their rightful place on the stage of our male-dominated art world.

A painstaking 3 ½ years have been devoted to just these first four The Real Guerrilla Girls pieces. This has included finding the founding members of the Guerrilla Girls through the secret network, flying to meet them, photographing them, recording their oral histories and archiving their story, researching their alias, assembling the alias’ works, and creating artworks from the combination of all these elements to spin a red thread that runs through ancient time to now, and into the future. “If their images are in museums across the world, all the aliases on one side and all Guerrilla Girls on the other, their empty frames slowly filling with their unveiled identity as they pass on, this will be so powerful,” says Grove. A Foundation has been set up by this project’s authors to ensure that it continues beyond their lives, too.

The current Guerrilla Girls movement is stronger than ever, teeming with emerging generations of activists who are very busy disrupting the art establishment. Recent responses have come from Jerry Saltz, who has ranted in numerous articles about the inequity of women in the arts, artnet News, which has run several stories that have brought gender imbalance in culture into mainstream dialogue, and in March, shortly after launching the lauded Women, Arts and Social Change exhibition, the National Museum of Women in the Arts (DC) launched #5womenartists, a month-long invitation to post information about women artists, past and living, in a communal effort to trumpet them across social media; participants included the Guggenheim and the New Museum in New York, and the Los Angeles Country Museum in LA.

On opening night at Galerie Lelong, several active, unmasked Guerrilla Girls were mingling among the large crowd without anyone knowing who they were. While standing in front of the images, some viewers synchronously googling ‘guerrilla girls’ on their smartphones, a strange feeling of occult timelessness set in. With ghosts of artists past, actual but undercover artists present, Internet input, and a swirl of time periods cross-pollinating—it seemed that a portal into one of the most secret stories in the history of art was opening. Among a larger show that celebrates collaborations, this work discloses how a community can transgress its own borders to become enduring solidarity. The fact that its unsung heroines are successfully rewriting historical knowledge and the evolution of historical identity—evokes Bruce Sterling’s atemporality assertion that, “history is not a science, it’s an effort in the humanities.” 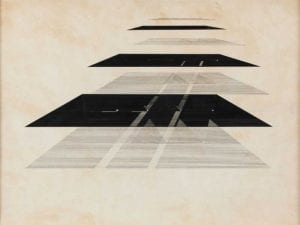 Nasreen Mohamedi – A Philosophy in Life at Metropolitan Museum of Art

The Metropolitan Museum of Art’s brand new enterprise, The Met Breuer, opened with a major retrospective of the Indian artist Nasreen Mohamedi.