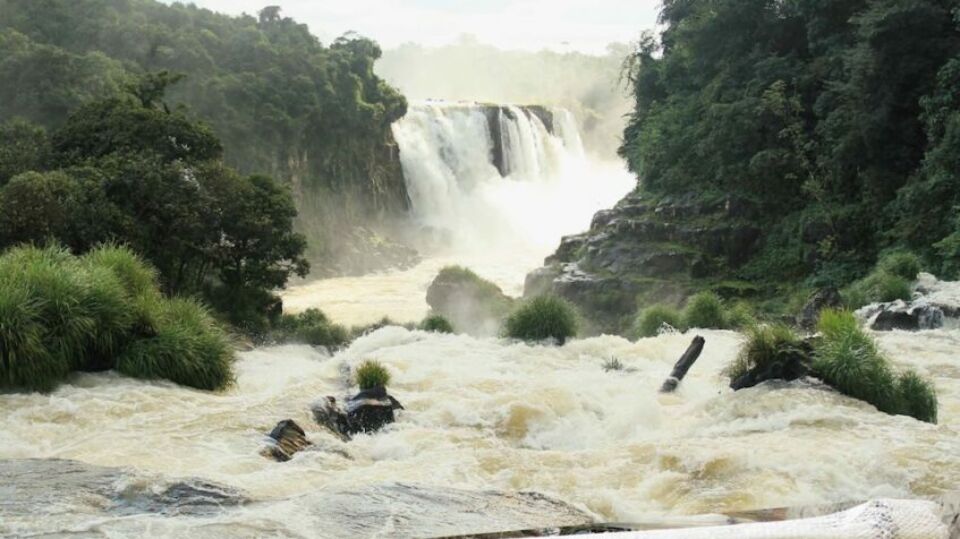 In the searing urgency of the climate debate, talk is usually in the present or future tense – focused on the things that need to happen now to prevent further catastrophe. Less attention is given to the past. And when the history of climate change comes up, it tends to centre on the Industrial Revolution in the West. But the origins of ecological breakdown are entwined with the legacies of European colonialism – the consequences of which are unequally distributed and highly racialised. We Are History, a new group exhibition curated by Ekow Eshun, reframes the climate narrative in these terms.

From the offset, colonialism was a project based on extraction, one that massacred and enslaved people, stealing land and destroying ecosystems to make way for high profit plantations of tea, cotton or sugar. Several of the artists in the show, which takes place at London’s Somerset House, look at natural resources and how they’ve been harvested and transported. The photographic work of Zineb Sedira (b. 1963) focuses on the trans-Atlantic sugar trade, whilst artist Otobong Nkanga (b. 1974) explores the meaning of the kola nut – an early ingredient in Coca-Cola – within Nigerian culture. A newly commissioned installation by Shiraz Bayjoo (b. 1960), Dan Sa Karo Kann (in those cane fields), reflects on the role of plantation colonies through ceramics, textiles and sculpture.

Elsewhere, the show underlines the ongoing violations of the climate crisis, which disproportionately affect the lives of those least responsible for causing it. From the forest to the concrete (to the forest) (2019) by Alberta Whittle (b. 1980) was made in response to Hurricane Dorian, one of the worst cyclones to hit the Caribbean in modern times. The Colombian duo Lina Mazenett (b. 1989) and David Quiroga (b. 1985) examine jaguar habitats in the Colombian Amazon and the Lacandon jungle of Mexico. The creature, which holds great spiritual significance in many native American cultures, is under threat from ongoing mining.

“The artworks in We Are History are lyrical, moving and historically charged,” says Eshun. “They seek to address [the] climate crisis, not directly or didactically, but with a poetry and nuance that expands the visual framework we bring to the subject. By preferencing perspectives from the global South, the exhibition also identifies environmental change as a racial process with deep roots in colonial history.” The pronoun “we” is bandied about regularly in discussions about the climate. Questions like “How did we let this happen?” or “How are we going to change?” neglect to consider who this “we” might include or exclude. This show shifts the conversation – proof there can be no environmental justice without racial justice.

We Are History runs until 6 February at Somerset House, London. Find out more here.

Somerset House invites viewers to reflect on their commonalities through a programme aptly titled ‘I Should Be Doing Something Else Right Now. ‘