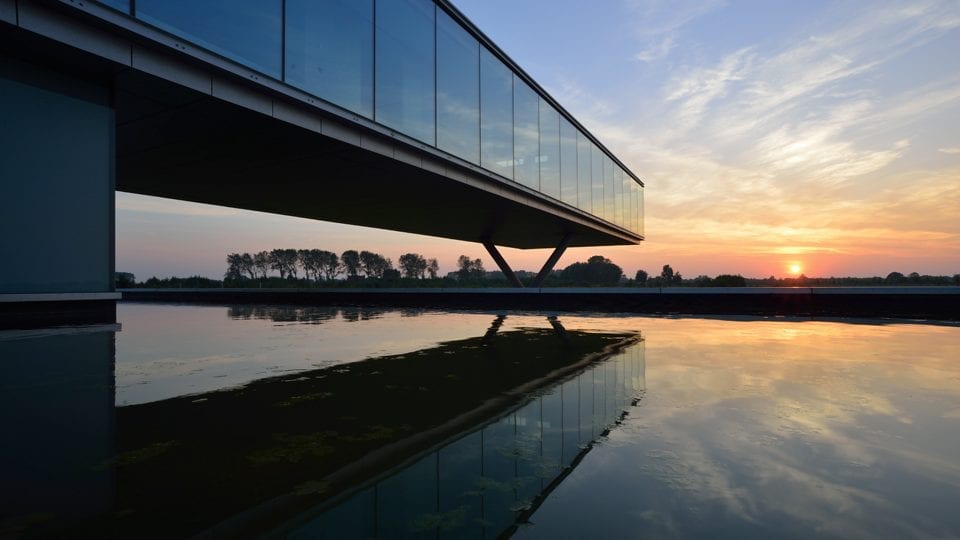 Over 80 years ago, in the Laurel Highlands located in the Allegheny Mountains, Frank Lloyd Wright created what many consider to be his masterpiece: a house balanced on the edge of a waterfall. With deep cantilevered eaves that seem to hang precariously over the stream below, Fallingwater (1935) demonstrated the powerful potential of combining modern design with the most fundamental of nature’s elements. This synthesis is the subject of Living on Water, a new publication that aims to highlight the diverse ways in which 21st century architects have integrated fluidity into their blueprints for contemporary homes. As the author, James Taylor-Foster, summarises: “Architecture is underpinned by four core components: the wall, the roof, the window, and the door. Each of these is bound by a single common purpose – to act as a barrier between a controlled interior space and an altogether less predictable wilderness beyond. The act of building, therefore, has a rather conflictual relationship with water; dependent on location – be it the arctic north, tropical south, or any of the temperate climes in-between – snow and ice, rain, and atmospheric humidity are considered to be amongst the architect’s greatest adversaries. Where there is water, however, there is always infinite scope for innovation.”

There are a multitude of options for such creativity and construction therefore the volume is divided into three strands – Built On, To Look At, or Reflect Water. This systematic approach, Taylor-Foster observes, looks at these categories as being interconnected. He notes: “A good building does not begin and end at the perimeter of its site, or the boundary of its walls. As such, the three categories intermingle and coalesce whilst, at the same time, offering readers a lexicon with which to parse the different possible relationships that architecture and the element can enjoy.”

Paul de Ruiter Architects’ Villa Kogelhof (2013) is an example that could arguably be included in any one of the book’s chapters. Straddling a reflective pool and supported by a steel V-frame, this single-volume structure is balanced by its mirror image, enhancing the serene symmetry of minimalist design. The uninterrupted glass façade and open-plan interior combine to provide continuous panoramic views of a vast artificial lake which lies to the north. Water not only defines the view of the house, but also the view from the house – an interesting social concept that promotes a sense of transparency and integration with the surroundings.

As the opening text from the villa’s chapter – Built To Look at Water – recognises: “The best homes challenge the dominance of their artificial presence in the context of natural landscapes. It is only when the ephemerality of life by the water – breezes, scents, and sounds – is folded into the design that a more rooted sense of belonging can emerge.” Located on a protected ecological zone, Villa Kogelhof is also energy neutral and, according to the architects, will eventually become self-sufficient. With electricity provided by solar panels and eventually by a planned windmill, the house is to be heated by a range stove fuelled by the wood from a young forest that has been planted on the site.

This focus on sustainability is, perhaps unsurprisingly, at the heart of many examples featured in the publication, since the incorporation of water necessarily entails a harmonious relationship with nature. As Taylor-Foster notes: “For a building to converse with its context, it must be capable of responding to the challenges posed by its particular environment. Water is an ever-changing visual canvas, absorbing and reflecting all shades of colour and able to transform from planar to sculptural in a moment. The ‘golden troika’ of water, landscape, and architecture can – when approached with conviction and a certain intelligence – lead to homes of elevated technical prowess and exceptional beauty, a formula that only a rarefied few ultimately achieve.”

At the level of residential construction, environmentally conscious designers are finding innovative ways to marry nature and structure in their eco-homes. Unit’s Dama zAmya Villa (2010) is a stunning example of tropical contemporary architecture on a remote island near Phuket, Thailand, with no access to mains services. “Given this restriction (or opportunity, in this case),” says Taylor-Foster, “it is entirely self-sufficient: a well provides a water supply, renewable energy sources provide electricity. A grass-covered roof allows the building to blend into leafy surroundings whilst cooling a self-contained microclimate. Even though green considerations remain too few and far between, projects such as this demonstrate that it is very much within our grasp.”

With more than half the planet covered by oceans, and most major towns located either on the coast or by a river, the majority of the world’s population lives in the vicinity of a body of water. However, due to the rapid pace of urban development, many citizens have lost touch with these natural lifelines, subsumed by the ever-advancing borders of the metropolis. Whilst cranes and construction sites are a typical hallmark of the modern city, architecture can also offer salvation from the chaos of 21st century life. Through considered composition and careful manipulation of sightlines, water can be visually introduced into spaces, imbuing buildings such as John Pawson’s Paros House I (2016) with a cooling and calming aesthetic. As the publication argues, “bodies of water – be they immeasurably large, quantifiably small, or in a state of constant motion – represent a particular sort of serenity. In the same way that open skies provide a sense of space and spaciousness, unbroken aqueous planes render a meditative point of focus.”

Situated on the Greek island of Paros, the aforementioned villa comprises a cluster of cubic volumes which overlook the sea. As this pure white structure bakes under the heat of the Mediterranean sun, it becomes a brilliant beacon within the dry climate of a hilltop setting. Taylor-Foster describes it as “an oasis at the heart of a hot, empty landscape.” Those who enter discover a tranquil setting, where the opaque exterior dissolves into the sky by means of a pergola, exposing sweeping vistas of the sea. A solitary tree protrudes through the slabs of a paved terrace, recalling the interior courtyards of traditional Japanese homes and adding to the Zen-like quality. “The large majority of projects assembled in this book are retreats of one sort or another for the mind, the soul or the body. Water has a beguiling capacity to captivate; it can create real-world environments that verge on the spiritual,” the author observes.

Further to tapping into the human experience – or indeed our task of reducing environmental damage – the book also looks at the idea of innovation and flexibility as a measurable element. Indeed, there is no shortage of ambitious projects to be found in the pages of this collection. Remarkable feats of engineering are performed by F2 Architecture’s Pole House (2017), a beachfront home atop a 13-metre column. The unprecedented possibilities of technology are also found in examples such as FLOATWING (2015), a motorised modular floating house by Friday/University of Columbia, which reconsiders the conventions of residential architecture. Elsewhere, dwellings perch on clifftops, cascade down hillsides or, in the case of Florida Beach House (2011) by Iredale Pedersen Hook Architects, sprawl across sand dunes.

These structures make bold architectural statements with their unmistakeable forms, but they are not the work of any “starchitect.” The majority of the featured homes have been designed by relatively small firms, and are notable not for the fame of their creators but for their intrinsic architectural merit. Whilst they may not generate the same headlines as Norman Foster, Santiago Calatrava, David Adjaye or Zaha Hadid, this volume draws well-deserved attention to these underappreciated gems. Its gaze is not limited to homes of show-stopping extravagance; more restrained structures are also featured, such as the four timber-clad cabins that make up the Manshausen Island Resort (2015). Realised by Stinessen Arkitektur, these compact holiday homes cling to the edge of a rocky outcrop in the Steigen archipelago in northern Norway. Their timber cladding, which affords privacy from the other residences, gives way to full-height glazing as the cabins cantilever over the water, maximising their remarkable coastal views. “A good building deals with its particular location in an intelligent way,” says Taylor-Foster. “Sometimes that might demand a gentle form which says very little; at other times that might demand a louder, more boisterous piece of design.” These understated cabins clearly fall into the former category; simple and unassuming in their appearance, they are “defined by a modest character which attests to the simple life to be led on the islands.”

At the opposite end of this spectrum lies AIBS (2002). Realised by the Atelier d’Architecture Bruno Erpicum & Partners, a bold geometric form dominates a rugged clifftop site. The horizontal orientation is emphasised by a single ribbon window which spans the southward-facing façade and, from the living area, frames the expansive seascape below. Soaring 159 metres above the Balearic Sea, this home exists at the intersection of three elements: land, sea and sky. The natural borders of the coastline and the horizon that ordinarily divide these entities are dissolved by an infinity pool which mediates a seamless transition between the three.

Ultimately, this compendium invites the reader to reconsider the complex relationship between nature and humanity via the versatility of water. Evoking tranquillity in some properties, lakes or pools can also inspire awe or fear, be relegated into the background as a decorative feature or, as at House on the Cliff (2015) by GilBartolomé Architects, elevated to become a centrepiece. Buildings are typically thought of as static; water, by its very nature, is fluid. The homes featured are proof that this apparent dichotomy is not insurmountable. Taylor-Foster quotes the poet Johann Wolfgang von Goethe, who “described architecture as ‘frozen music’, which has always implied – to me, at least – that it can be liquid. Structures can be as flexible as the minds of those involved – and creativity, like fluidity, has an uncanny way of finding its way through the smallest cracks.” As they strive to achieve a harmonious interaction between the built environment and the organic world, these visionary designers have turned silent structures into dynamic forces. 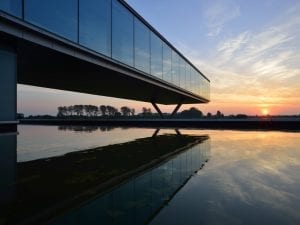 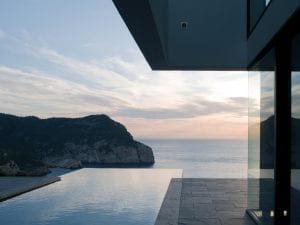 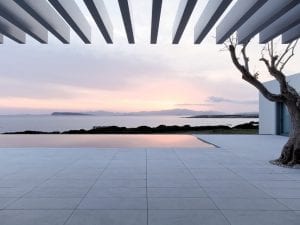 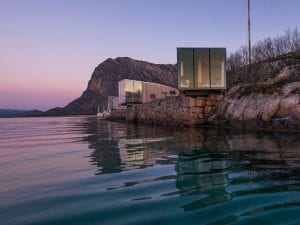 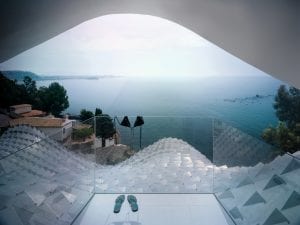 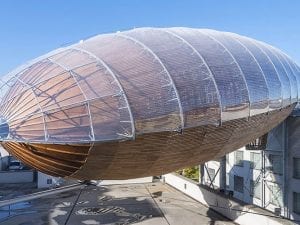 The DOX Centre for Contemporary Art, Prague, has recently revealed a unique architectural intervention perched atop the organisation’s campus. 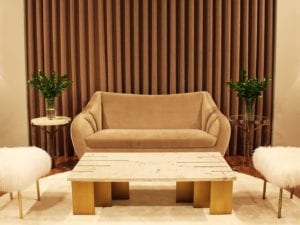 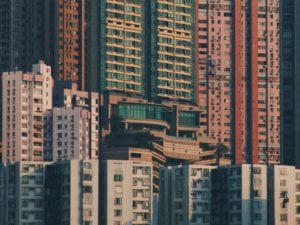