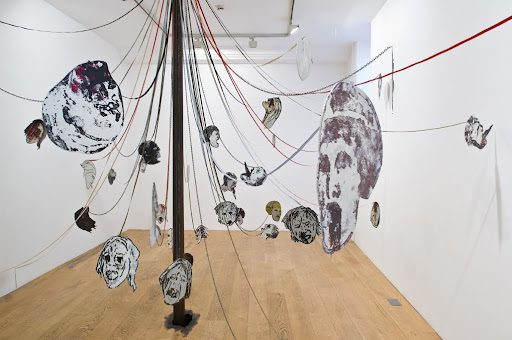 Right from the first moment of entering this exhibition at the Serpentine, Spero’s art makes an assertive and powerful impression. Immediately after passing through the gallery’s doors, a panorama manifests itself across the whole field of vision. Disembodied heads on the end of chains radiate out of a central point in the centre of the ceiling as if from a demented hellish maypole. Each face is composed of rough distressed marks, colours bleeding into each other, surfaces pitted, expressions of horror and torment, some screaming in rage or pain, others sticking out long tongues. That this will be a visceral and uncompromising exhibition is apparent immediately.

Spero began producing the body of work that she is known for, from which a selection makes up this exhibition, relatively late in her life, in her early forties. It was through becoming politicized in the cauldron of the 1960s in New York, to the backdrop of the Vietnam War and the Civil Rights Movement, that Spero found what is essentially her muse –injustice, in particular sexism and war. These subjects have provided a target for her aggression, a focus for her activism, and an anger that fuelled her intense artistic practice up until her death in 2009 at the age of 83.

In a period in which political and radical artists, particularly in New York, were tearing down the boundaries of what art could be, first through pop art, then minimalism, conceptual art, land art, performance art and so on, Spero occupies an unusual position. She was extremely political and engaged, yet exclusively used traditional mediums such as drawing, painting, collage and printmaking. She has worked with an apparent unconcern for the theoretical which, conversely, now makes her work feel extremely fresh.

Literally on the surface level, the exhibition contains a vast array of visual substance. Spero has used every method of mark making at her disposal, water colour, gouache, pencil and ink strokes, paper is scratched until holes appear, images are printed over hand made lines, large woodblock lettering with damaged surfaces serve as headline messages alongside hand typed columns of text, ripped out and fixed next to strange cut out figures and multiplied found images. Certain figures reappear throughout the pieces, drawn with simple lines, but with warped bodies and multiple legs and breasts. The marks are full of movement and violence, compositions are free form and experimental, as are the formats for the work and their installation in this gallery. One room features panoramic scrolls several metres long. In another the walls are covered on all four sides with a collection of densely packed pieces that reach up to the ceiling.

All this is not entertainment though, but a means to an end. The feminist and anti-war message here is forceful and direct but never simplistic, Spero shows these problems are deeply carved into the human psyche and takes both an epic view, globally and across time, to a specific and personal view, including typed testimonies of specific instances of abusive behaviour. In Marduk (1986) several drawings of female figures walking on all fours are interspersed with texts describing state sanctioned abduction, rape, and torture of women. Testimonies from Argentina, Turkey, El Salvador, and China amongst others demonstrate the scope of Spero’s conception of the feminist struggle as a ubiquitous problem. Another combined drawing and text piece contains a pasted passage by Hélène Cixous making a psychoanalytical criticism of male domination, discussing Freudian notions of envy and conflict between the sexes. These texts serve to contextualise the images that occur elsewhere in the exhibition, when, for example in Azur (2002), repeated prints of one woman naked and bound, and another with a noose around her neck, are juxtaposed with classical and tribal statues of the body. Throughout, Spero’s work always points towards a bigger picture, so that not only individual cases of sexism are the issue, but the root of the tendency itself.

The same approach is applied when she makes war her focus, the familiar symbols such as mushroom clouds and helicopters are made uncanny in a series of her drawings from 1966-67, here a helicopter has sprouted breasts, another decapitates with it’s blades in Victims, in Atomic Mushroom Cloud the explosion blasts out sperm with tiny male heads. Spero attacks male chauvinism in the most direct way, by highlighting its sexual nature in monstrous imagery.

The exhibition includes a good cross-section of Spero’s work, showing examples of the metaphysical drawings she would make before becoming overtly political, which are quite beautiful in themselves, to other key works in her development such as the series of drawings based on quotations from Artaud. One of which, from 1969 sums up the visceral experience of seeing her work: “this crucible of Fire and Real Meat”, Spero’s roughly made brush strokes depict an imperfect and troubled world, but one full of a fearsome vitality.

To read Kiki Smith’s short essay on Spero on the Aesthetica Blog please click here. Nancy Spero continues until 2 May. For more information visit the Serpentine Gallery – why not pick up a copy of Aesthetica while you’re there?

The Aesthetica Short Film Festival (ASFF) was a dynamic, four-day international event that took place in the City of York from the 3 – 6 November.