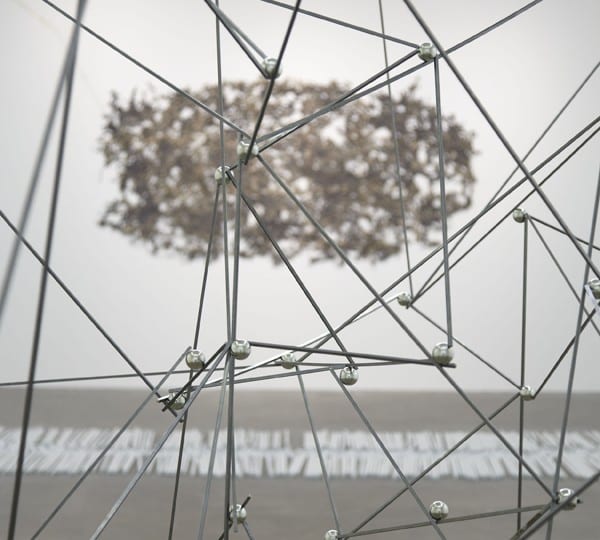 The gold plated peanuts found in Ecosystem (2014) were rumoured to have been stopped and inspected by customs for fears that they contained illegal contraband. A fitting anecdote for Michel François’ first major survey in a British gallery, Pieces of Evidence, which opened at Birmingham’s Ikon Gallery to critical acclaim and continues until the 22 June. The gallery’s two floors are transformed by sculpture, film and photography that are multifaceted; able to be explored as stand-alone works, or read with wider scope as an intervention with the building’s architecture.

Upon entering into the gallery, a silent tension twists throughout the works on the first floor. The opening of the gallery is square and contained, an architectural attribute that François replicates in Pièce Détachée (Parts) (2010). It is comprised of a cube frame, the inner sanctuary of which is ruptured by steel rods suspended in perpetual collapse by powerful magnetic balls. The imminent demise of the Pièce Détachée (Parts) that lingers in one’s mind is violently visualized in the adjacent Néons brisés (Broken Neon Lights) (2003). Located in the main area of the first floor gallery, a far more spacious area, the work, a row of exactly four hundred neon lights has had a pathway trampled along it. Shards of glass litter the wake of François’ foot in an elegant chaos. As one once again flickers back to the precariousness of Pièce Détachée (Parts) fearing the worst.

Exposing such premeditated acts of destruction has been dominant throughout François’ career to date. However, a paralleling subject that fascinates François’ manifests itself as one explores the exhibition: subversion – the netherworld. On the second floor gallery, the video Pieces of Evidence (2013) demonstrates a selection of confiscated objects found by border officers that superficially appear mundane and non-descript, yet have been specially adapted to carry contraband. A particularly striking example shows a candle, lit, having its bottom removed to reveal a container of white powder. In this François broaches the subject of our investment in objects, describing them as “hybrid” and “unclassifiable”, as they are a “compilation of real and unreal.” The objects become tainted by a human action that existentially increases their functional value.

On the gallery floor the aforementioned Ecosystem (2014), composed of a rectangle of asphalt and the sporadic placing of gold plated peanuts and cacti. At one end a block of ice sits slowly and silently evolving. All the contents are “suspended in time” corrupted by outside sources – the gold covering the peanuts, the rooting of the cacti into the asphalt, the melting ice water seeping into the cracks in the asphalt – as the work becomes assimilated as part of the gallery’s architecture. The audience precariously traverse over the asphalt exploring the new territory flouting the typical borders between artwork and the physical gallery. On the surrounding gallery walls, Contamination (2014), a series of square canvases, creates a fractured horizon line of off-white and plum-black, playing off the alien like terrain of Ecosystem. Upon further investigation, however, the canvases are is in fact plaster casts that have been dipped in ink, which in turn has seeped up the plaster before being dried in its tracks.

François therefore revels in the chameleon trickery that can be produced by combining certain materials. But he is also infatuated by the tension that is expelled by it, the risk of being caught and its subsequent re-reading – which is exactly what the exhibition provides the viewer with. Catching François and his artwork, unmasking them and their context to the space, to one another, to the artist and to the viewer. 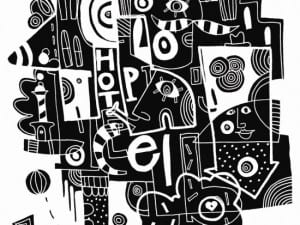 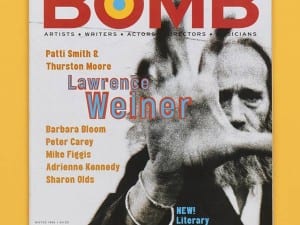 Yto Barrada’s RIFFS is a highly anticipated and significant exhibition for Ikon. The show focuses on the realities around her, in particular the process of the “new” into a society where the “old” prevails.