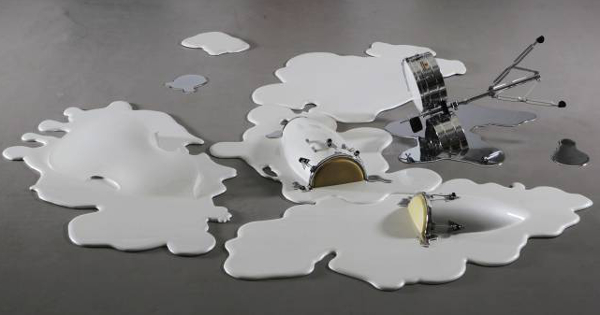 Cuban art collective, Los Carpinteros is formed of duo Marco Castillo and Dagoberto Rodríguez who create humorous installations and sculptures which point towards whimsy yet really probe into politics, conveying their own political viewpoints. In alluding to playful comedy, the two are able to criticise without intimidating audiences or alienating the viewer – creating an accessible platform from which they can be heard.

For their first major show in a public London institution, the pair have developed extensive installations, sculptures, watercolour drawings and a film screening, which interrogate the functionality of architecture and design and the relationship of these artforms with society.

The ground floor of the gallery is dedicated to large-scale installations. Tomates (2013) is a vast wall installation consisting of 200 real tomatoes thrown against the gallery wall which, itself, has been marked with carefully crafted porcelain tomatoes – harking to political uprising, craft and cultural history. Meanwhile an ebony replica of Havana’s modernist Solimar apartment complex becomes a set of acoustic boxes, each “apartment” functioning as a single loudspeaker which reproduces the sounds of a family home.

Los Carpinteros’ watercolours function like architectural blueprints for site-specific constructions adapted to each exhibition space; in the upper-floor galleries these watercolour drawings stand alongside small-scale prototypes of prison fabricated in steel – some of which have been transformed into full-scale reading rooms. A backdrop to this is the film Conga Irreversible (2012), screening throughout the exhibition and depicting a raucous, extraordinary public conga. 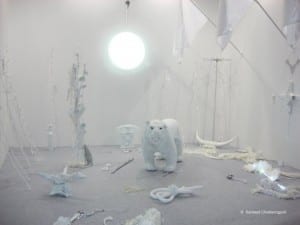 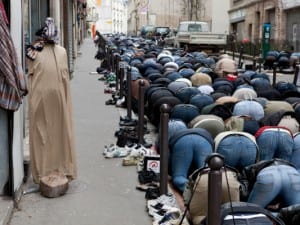 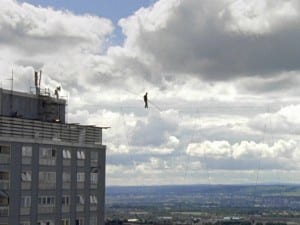