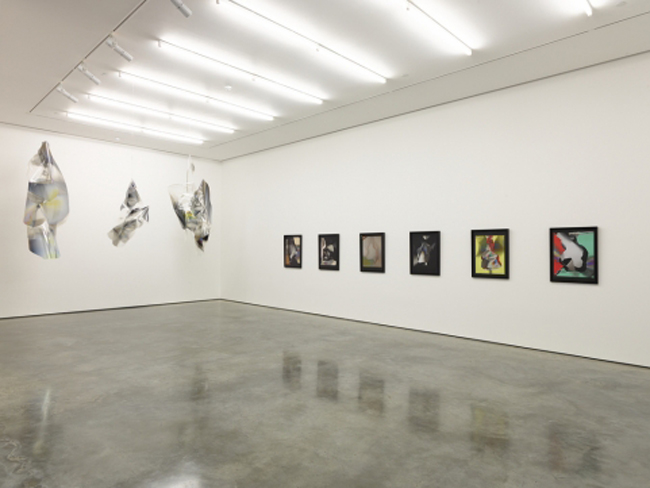 It is hard to put into words; an accurate representation of a journey through an exhibition that is so tangible and transitional, and to do it justice. At London’s legendary White Cube gallery prolific American sculptor Larry Bell presents a survey of new sculpture and paper based works: Mirage Collage and the Light Knots, which will continue until the 12 January 2014. Well-known for his glass cube sculptures, the act of perception is again being addressed, however this time two-dimensionality refracts fleeting glimpses of three-dimensionality, cloaked in illusionary forms with the slightest whispers of lyricism.

It would seem that the highly polished and clinically pristine offers the greatest sanctuary for Bell’s work. The white walls maximize any disturbance against their drifting perfection – consequently one is able to focus analytically upon the work’s presence solely. Cube 24-2-92 (1992) in the first room is the first offering to the viewer. A glass cube hailing previous aesthetic of Bell works, resides upon a clear elongated glass cube in the centre of the room. The faces of the cube are decorated with a series of Inconel and silicone monoxide prints of daguerreotype-like forms and grids. As one navigates the work, the forms on the faces slice the partially visible emptiness produced by a lack of architectural features, capturing and releasing light.

Also in the first room are a series of larger wall mounted works which utilise a mixture of materials collaged together, evoking a sensory response from the audience. F 69 (2009) and all of the works in this series, have a feminine form adopted as a result of, what Bell describes as, a continuing ‘seated nude motif.’ Upon the surface thin strips of various materials intertwine, subtly locking together in an openly abstract manner. Therefore the work would largely come across as an abstract piece, however each piece possesses the signature curves and elongated slender forms reminiscent of a woman’s body. Bell has constructed this motif in a most poetic manner, leaving the forms ambiguous enough that the element of mystery still prevails over the work’s visual identity. The F 69’s most enigmatic feature (and this could be said for all the wall based work) is the slanted glass that accompanies each work, allowing the light of the space to be manipulated and trapped within the colours of the piece but also reveal distorted reflections of the space.

The second room reveals another series of Bell’s wall based works, this time larger in number and smaller in scale; silently they span the length of the room with a dangerous subtlety. Their black frames are the height of revolution to perfect white walls. Yet, something strange lurks at the far end of the room. Curved materials flutter from the ceiling in perpetual motion. Just like the work within this exhibition, the reflective material moves tantalisingly, shooting essences of soft light across the gallery like the scent of woman’s perfume as she walks by you in the street, subtle, intoxicating, a trapped moment of a brief encounter never to be repeated in the same way again.

To celebrate the unveiling of the Women’s Designer Galleries in its London store, Selfridges has commissioned The Film Project – a bespoke short film collection. Free screenings continue until 26 March.