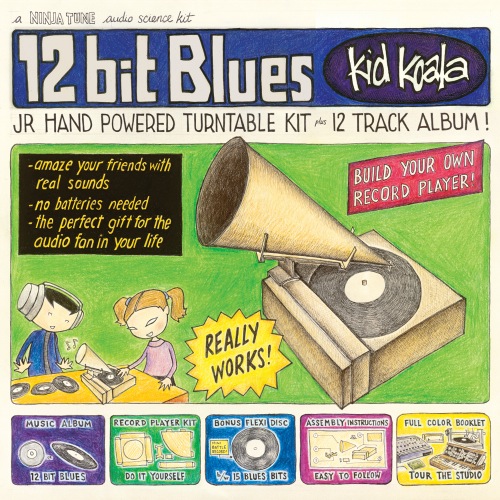 From the instant 12 Bit Blues starts playing, an immersive and incredibly thrilling experience begins. As a listener, you feel like you’ve been given access to a rare privilege and the mere fact you’ve listened to this album raises your stats on the cool-o-meter. Kid Koala, AKA Eric San, has created an intelligent, raw and immediate album following the success of 2011’s Space Cadet: Original Still Picture Score.

Kid Koala has made a name for himself, not only as a DJ, but also as a visual artist with a number of graphic novels and residencies (latest one at MASS MoCA) under his belt. However, he is most known for his innovative sampling and turntables, having contributed to projects by Beastie Boys, Gorillaz, Jack Johnson and Radiohead. He’s literally a genius on the stage, bringing innovation to the table.

12 Bit Blues features tracks that are stripped back to their bare essentials, creating an album that’s as stunning for its creative engineering as it is for its ability to present the blues in a new and exciting way. This album is not even a must – you have no choice. It’s a need.