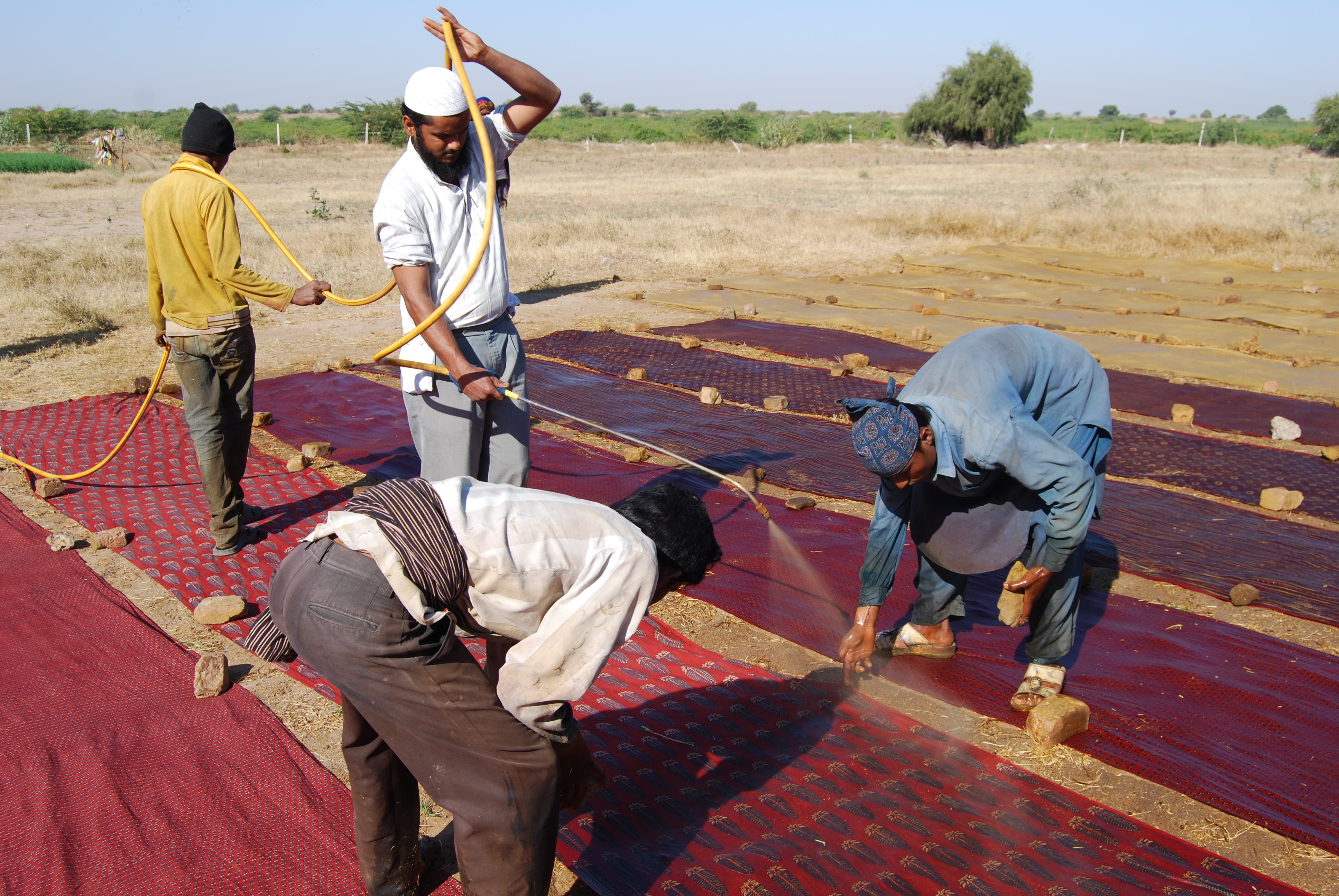 Imprints of Culture at Bonington Gallery, Nottingham Trent University, will explore the contemporary production and use of Indian block prints. Like few other objects, block prints embody richly diverse histories that have been shaped by trade, conquest and colonisation, technological innovation and entrepreneurship. The exhibition shows how block printing, one of India’s foremost crafts, has not only played a role in the ritual life of the subcontinent but also in the creation of visual identity. Integral to caste dress and modern urban style, block prints have been a significant source of revenue through centuries of domestic and international trade. The show includes block prints from leading centres of the craft in Gujarat, Rajasthan, Madhya Pradesh and Andhra Pradesh, and includes traditional designs as well as innovations. It has been developed in collaboration with block printers in these areas as well as fashion designer, Aneeth Arora. We speak to the exhibition’s curator, Dr Eiluned Edwards.

A: The block prints produce delicate and exuberant patterns, could you explain the technique behind this?
EE: The technique of block printing is highly adaptable so the variety of styles is numerous and used to reflect regional identity, religious and social status, and gender. As links between the craft, fashion and home wares industries have been established, new designs have been introduced and traditional patterns adapted to suit the tastes of urban consumers. The blocks, made of hard wood such as teak and sisam, are engraved with the design – complex patterns using several colours require multiple blocks, which are used in a specific sequence to build up the design. The block is the vehicle that carries the mordant and dye pastes to the cloth: the printer dips the block in the paste tray and then stamps it firmly on the cloth – there is a musicality to the process and you can hear a good printer by the steady percussion of his printing (the craft is a predominantly male preserve). Printing stages are interspersed with dyeing. Some dyes in use require the cloth to be boiled in order to fix the colour – madder, a natural dye that produces red is typical of this process – other dyes are used cold; indigo is a good example. Until the late 19th century all block printers and dyers worked with natural dyes – the classic Indian dyes are indigo and madder. Nowadays, the majority of production is with synthetic dyes, which are cheaper and easier to use although there are environmental issues with some categories of dyestuffs – for example, naphthol dyes, still widely used in India, are banned in Europe because of their toxicity.

A: How does this form of printmaking contribute to the cultural and social make up of India?
EE: Until quite recently, block printed textiles were key components of caste dress, reflecting regional affiliation, occupational and religious identity, social and even economic status. The block printers came under the patronage of the Mughal Empire (1526-1857) as well as the royal courts of princely India, but they served many other social groups, too. Thus they have helped to shape the visual identity of India and played an important role in its material culture – a fact recognised by Jawaharlal Nehru, India’s first Prime Minister after the country gained its independence in 1947. From the 1950s onward, Nehru’s government implemented a programme of craft revival in which block printing played an important role. Craft was seen as central to forging a national identity; it would also generate rural employment and revenue from exports. But the impact of block printing on global material culture should not be overlooked; painted and printed cottons were amongst the most important commodities exported from India from at least the medieval period until the 19th century. Chintz, considered an icon of ‘Britishness’, was actually introduced to the UK from India by the East India Company in the 17th century – a painted and printed cotton textile produced on the Coromandel Coast of South India, it transformed British (and European) fashions of the day. Similarly, the export of Indian block prints to East and Southeast Asia has had an enduring impact on the material culture of countries such as China, Japan, Thailand and Indonesia.

A: What are the fabrics typically used and fashioned for?
EE: Block prints have been produced for caste dress, courtly attire and for export – the artisans calibrated designs to suit the tastes of a highly diverse consumer base. Certain categories of block printed textiles have also had a ritual function – for example, mata ni pachedi (cloth of the mother goddess) still painted and printed by the Chitrakar community in Ahmedabad, Gujarat, is used by marginal groups such as Rabari nomads, and Chitrakars themselves in worship of the mother goddess, a heterodox expression of Hinduism.

Since the 1970s, there has been a growth in demand for block prints from the global fashion industry. They played a big part in shaping the ‘hippy chic’ aesthetic of the late 1960s and 1970s, and were prevalent in the boutiques of swinging London. More recently, block prints dyed with natural colours have become a feature of the global ‘slow clothes’ movement whose advocates have embraced their rich symbolism, eco-friendly production methods, and rootedness in specific local communities. Delhi-based designer Aneeth Arora, whose label Pero has established a global following for its hand-fashioned garments made from classic Indian textiles, has established an enduring relationship with block printers in Kachchh district, Gujarat. While much of her work has been at the level of couture, she has also designed a collection using ajrakh, a traditional block print worn by animal herders in Kachchh as caste dress, for Indian retail giant Westside, which flew off the racks in 2014. Another advocate of sustainable fashion, social entrepreneur Charlotte Kwon, runs Maiwa Handprints in Vancouver, Canada. A highly successful retail company, Maiwa has introduced Indian block prints to large parts of Canada and North America, an expanding market that supports hundreds of artisans in India.

A: Has the traditional technique allowed for much technical innovation, or has it remained largely unchanged?
EE: The technique is largely unchanged: the artisan still stamps the design on the cloth in the same way as his forebears did going back hundreds of years. There have been changes, however, to the dyes used. By the 1950s, synthetic dyes (naphthol, azo dyes, etc) had almost entirely replaced natural dyes; knowledge of a technology that dates back over 4,500 years in India was rapidly disappearing. The appeal of synthetic dyes lay in their ease of use, cheapness and vivid colours; in comparison, natural dyes are labour-intensive. But a few block printers became concerned that they were losing their traditions – a heritage that can be traced back to the late Harappan period (2500-1500 BCE) when South Asia’s earliest urban culture developed in the Indus Valley region. One such was Khatri Mohammad Siddik of Dhamadka village in Kachchh district, Gujarat, who resumed using natural dyes in the 1970s, and taught his sons techniques that went back at least nine generations in his family. They – Abdulrazzak, Ismail, and Abduljabbar Khatri – are now among India’s foremost block printers and dyers whose work not only reaches a global clientele but is also held in the collections of the V&A, the Ashmolean Museum, Oxford, Musee Guimet, Paris, the Textiles Museum, Washington D.C, and the Calico Museum, Ahmedabad. 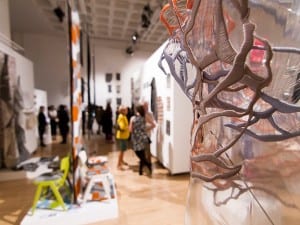 The Bonington Gallery is a significant exhibition space situated within the School of Art & Design at Nottingham Trent University, with a diverse programme of year-round exhibitions.

Amidst the season of Degree Shows, students across the UK are finalising and displaying their works as part of a nationwide collective of talent.