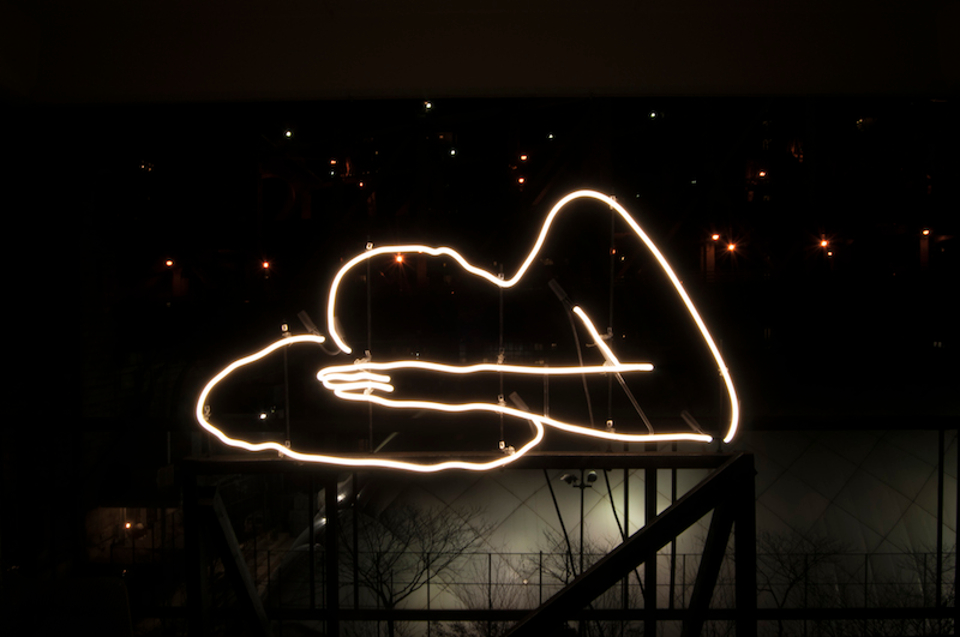 Artist Fanny Allié showcases her work at this year’s VOLTA 12 in Basel and is presented by Fresh Window, Brooklyn. Allié explores the outlines of the human form, using collage and emotive neon installations, to question our relationship with our bodies, social movements and the intrinsic memories contained within. We speak to Allié ahead of this year’s event, which opens on 13 June.

A: Much of your work explores themes of homelessness and the interconnectivity of people inhabiting the same space. What first inspired you to explore these themes?
FA: My first inspiration was a simple observation of my surroundings. In 2011, I created The Glowing Homeless, a neon outline of a human form resting on a park bench for a one-night public art event (Bring To Light) in Greenpoint, Brooklyn. I had noticed that this particular park bench was usually the bed for some homeless individuals. I incorporated the social context of this public park into my artwork. The Glowing Homeless was exhibited at Fresh Window in the fall of 2015.

A: What can we expect from your display at VOLTA?
FA: At VOLTA with Fresh Window (Brooklyn), I will be showing a neon light sculpture representing the outline of my mother sleeping. The light figure was originally created to be displayed on a balcony in Midtown (Manhattan). The semi-public sculpture was appealing to riders of the Queensboro Bridge and Roosevelt Island tramway. The sculpture contributed in blurring the boundaries between private and public, and hopefully also triggered fictitious scenarios, for those who observed it from a distance.

The rest of my work is a series of embroidered pieces on fabric for which I superimposed contours of figures inspired by my observation of people inhabiting specific hangout locations in New York City (Union Square, Washington Square) and abroad. The people that I focus on are usually considered to be “in the margins of society” and create their own alternative way of spending their time. The contours interact with each other. They create various tensions through which I capture the energy of bodies in movement, which also relates to the energy of the space itself.

A: How important is it for you as an artist to be featured at VOLTA? What do you hope the audiences will take from your exhibition?
FA: It’s an honour to be featured at VOLTA and I’m especially excited because I will get to be there during the fair. It’s always difficult to answer that question, but I hope the audience can get a sense of space, rhythm and energy of the city through the gestures, poses and body of the people who inhabit it.

A: Your work often makes use of fragile, delicate materials. How does this impact upon the overall message?
FA: The choice of my materials is always connected to the nature and context of my projects. Yes, I often use fragile and used/found materials: paper, thread, fabric, neon that emphasize the idea of ephemerality that is present throughout my work. For public art installations, I use more durable materials such as wood or steel, however the idea behind the work remains the same. 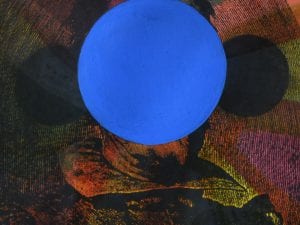 Artist Lado Pochkhua takes on post-Soviet identity in his draftsman-quality renderings of Georgian aristocracy. We speak to Pochkhua ahead of VOLTA 12, where is presented by Project ArtBeat.

Aesthetica’s must-see shows for mid-October investigate the politics of image-making through documentary, post-production and installation. 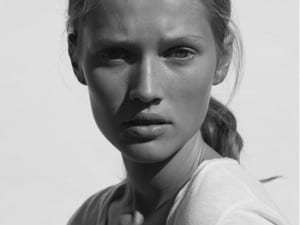 Fashion! A Selection of Photographs from the Camera Work Collection at Unseen, Amsterdam

This group exhibition Fashion! A Selection of Photographs from the Camera Work Collection will present a survey of nine decades of fashion photography. Part of Unseen in Amsterdam.