Solveig Melkeraaen’s fall from grace is unforgiving, but in response to it she made a unique film, Good Girl, about depression with universal resonance.

Rarely do films convey the true complexity of mental health problems: the way that the situation defies all logic and sense, warping and manipulating inner emotion. With a handful of exceptions, the issue remains a cinematic taboo: the enormous elephant in the room. But that is exactly what Norwegian filmmaker Solveig Melkeraaen’s new documentary Good Girl tackles – it explores each and every painful aspect of the director’s own experience of depression.

This is nothing like the masculine ferocity found in Miloš Forman’s One Flew Over the Cuckoo’s Nest (1975), the grandiosity of Martin Scorsese’s Shutter Island (2010) or even David O. Russell’s novel and eccentric Silver Linings Playbook (2012). Good Girl is much more a fly-on-the-wall depiction of Melkeraaen’s intimate thoughts and feelings, shorn of any superficial vanities or façades. There is little glamour to be seen, only a gritty struggle for life, with her friends and family to bear witness. “Being good isn’t necessarily a bad thing,” as she ominously puts it at the opening of the documentary. “Until it gets the better of you.”

“It started because I was getting ill in 2008, and when I was recovering, I realised that this could be an important and interesting story to tell,” reveals Melkeraaen, in her meandering Scandinavian staccato. From a young age she was accustomed to unblemished success – a straight-A student-turned-acclaimed filmmaker, who won numerous awards at film festivals in Norway and neighbouring countries. Even at the tender age of two, she’d already learnt a whole book of poems and songs by heart. But as the realities of life struck, and she became aware of the impossibility of perfection, Melkeraaen slumped into a heavy clinical depression. One that she chose to battle against by using the somewhat controversial method of electro-shock therapy.

This was never going to be a simple journey. “It was quite difficult when I was getting ill and I had to decide whether we should film this or not,” explains the director. “Especially because my father wasn’t happy that I had decided I wanted to make a film about what was happening to me. That was one of the most difficult parts – getting my parents involved.”

But, as Ingvil Giske , the film’s producer and Melkeraaen’s translator when it comes to the peculiar vagaries of the English language, adds: “She found she could go closer to the story at the beginning because she didn’t have to go through another person – there was immediate access.”

Melkeraaen has always required a close affinity or connection with a subject for the starting point for her films. She explains that her end goal is the act of “telling stories”. Melkeraaen grew up in a remote part of northern Norway where there was little to do, but fortunately, a well-known writer called Lars Saabye Christensen lived nearby, and held creative workshops. From there, she had stints on studio television and radio, eventually taking her to film school at Lillehammer University College. “I started to go to film festivals and watch a lot of documentaries,” she recounts.

“The first huge film experience that I can remember was watching the French movie Être et Avoir by Nicolas Philibert.” That was a turning point. Melkeraaen was inspired and began to carve out a career in documentaries that were “strictly observational – cinéma vérité-like.” But Good Girl is far from that – it is a remarkable shift from those days. From the beginning, she makes her presence unusually overt: we see her looking at us through the reflection in a mirror. Viewers trawl through her personal history from making films about a call centre she once worked in (Statistics) to a portrait of two immigrants (The Somali Sisters), and even to the blossoming of Melkeraaen’s relationship with her boyfriend, Ravn, an aspiring scriptwriter. Then we see her warts-and-all decline.

Good Girl is about the towering expectations of society, and how these can be reconciled with imperfection. Melding fact and fiction, the documentary is punctuated by recurring scenes in a surreal white-tiled swimming pool, a space that evokes Federico Fellini and Samuel Beckett, while Melkeraaen gallivants in a red tutu dress. “It started when we were making the sound recordings with my psychologist [which are also in the movie]. One time I visited him, he asked me how I would see myself as a statue: I thought of myself at the top of a high pedestal, then as the image of a ballerina falling.”

These falls are striking indeed. Melkeraaen made the decision to include startling footage of her electro-shock therapy – her face clenches and body spasms while an attendant holds her jaw shut, only for her to later throw up. Our reaction is mirrored later as she watches the incident from a sofa. “In some periods of this process it was difficult. We had to have a camera and photographer at our house, and when we were talking to each other, I wanted us to lie in the bed with two cameras filming.” Is documentary-making part of the problem? “Yeah, maybe,” she concedes. But Giske jumps in: “A 9-5 job won’t help. You’d die from boredom.”

To go alongside these tumultuous lows, however, there are empowering highs, peppered with pitch-black humour. “For me, it was important to use humour,” says Melkeraaen, who attributes part of this philosophy to the influence of northern Norwegian comedy. “I have always used it, and I thought, ‘Why couldn’t I use it on this topic?’ That was an exciting goal: to create a film about depression but to make it lighthearted.” Her sprightly brother Magnus is a particular highlight, a case in point, coming out with some great one-liners: “You even have to be the best at being depressed, Solveig!” Meanwhile, her parents wryly remark, at least she didn’t write thousands of pages like the famously hyper-detailed Norwegian novelist Karl Ove Knausgård.

“Now, my boyfriend and family are very proud of Good Girl. It has become a common project, and a journey,” she happily explains. For future projects, she hopes to elicit revelations as truthful as her own in Good Girl. In one she will take to the subway with hidden microphones, capturing the strange and beautiful remarks of the everyday. Another project is what she describes as the “first documentary to be for children in Norway.” It concerns the issue of cod-tongue cutters – a widespread source of child labour in Norway, where children are equipped with enormous knives and given privileges in order to provide this Norwegian delicacy.

For now, Melkeraaen is basking in the success that may have saved her life. “We spent quite a long time looking for the right tone,” she points out, as well as using no less than five editors for the film. It has paid off, however, with a competition slot at the prestigious Sheffield Doc/Fest. Like the best of them, Melkeraaen frames depression in an engaging and dynamic way. It may not quite be the feel- good hit of the summer, but this autobiographical work is both a potent refusal to give in and a rebuff to stigma.

Atiq Rahimi’s The Patience Stone is built upon the ancient Persian myth that the syngué sabour is a confessional tool, an object on which you can lay all your secrets, your despairs and your rage. 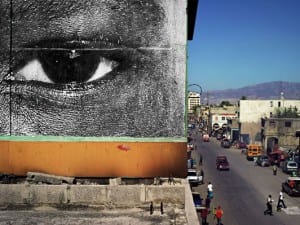 With a campaign image shot by Viviane Sassen, the second edition of Unseen Photo Fair looks to promote work by emerging talents and otherwise unseen pieces. From 26-29 September. 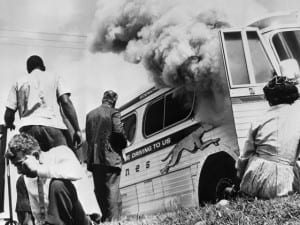 Freedom Riders is powerful and harrowing in equal measure. The film follows the inspirational story of six months that changed America permanently. From May until November of 1961, more than 400 black and white Americans risked their lives.