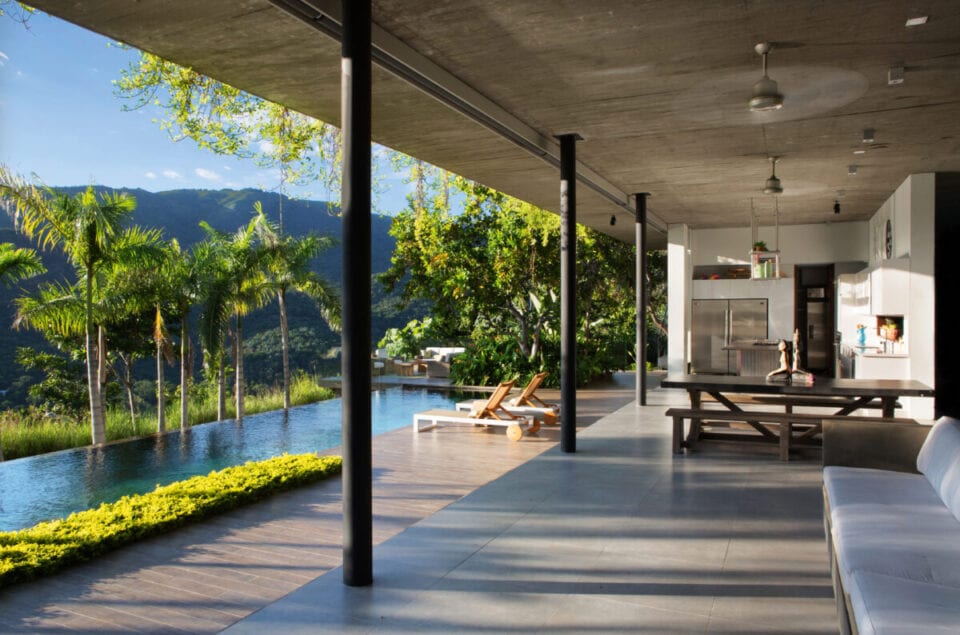 Innovation thrives within constraints. The last few months of lockdown have proved that – within limitations and heavy restrictions – humanity can still find ways to thrive, create and connect. In architecture, there are perhaps no greater limitations for than those posed by a mountain. These high altitudes are bound to extremes – avalanches, storms and impassable terrains – moving from dense forests to barren planes with no signs of vegetation. Building a home in these conditions requires resourceful, adventurous design.

“Despite the significant challenges posed by a sloping, diffi- cult-to-access site, the need for specialised and experienced contractors and seasonal working restrictions, the mountains are continually used as sites of architectural experimentation,” note the editors of Phaidon’s Living in the Mountains.

“Looking far beyond the vernacular of log cabins and chalets, designers of mountain homes have employed innovative techniques and materials to overcome previous limitations of structure and location – suspending homes over steep slopes or else sinking them deep in the rock.”

New York architecture firm GLUCK+’s House in the Mountains (2012), for example, is a guesthouse that has been submerged into the landscape of the Rocky Mountains in Colorado. Its sloping roof is an insulating and camouflaging

“meadow” of grass that avoids imposing on the view from the main house to the south. It looks like an Icelandic turf house, bulging out from the earth. “We found we could conceive of the building as a landform rather than a structure, and thereby gain the flexibility of a much more plastic medium: the ground,” says Charlie Kaplan, Principal Architect at

GLUCK+. “We folded the ground plane up, and as we did this, we found we could create indoor and outdoor enclosures that could be strategically concealed or revealed. It is a kind of ‘peekaboo’ in which the valley floor – now the new guest house – appears to rise up from the lawn of the main house.”

Kaplan says inflecting the ground plane into a single storey (measuring 18-feet) reinforced the idea of the building not as a manmade structure imposing on the mountain, but as a landform that can be used to emphasise the beauty of the surroundings: “Marking and accentuating the landscape moves beyond the idea of making structures to simply ‘frame a view.’ This extra height works on the interior of the space as well, allowing for a continuous clerestory to extend above the other house, providing panoramic 360-degree views from the inside. Here, one is inside the landform looking through it to the surrounding geography.”

In the same mountain range, Voorsanger Architects’ Wildcat Ridge Residence (2005) is similarly designed to integrate with its environment. The two-storey structure draws energy from 60 geothermal wells, meaning the building is completely off-grid. It also has a folded-plate roof that echoes the peaks of the mountains and, when blanketed with snow in winter, makes the residence all but disappear. Much like GLUCK+’s guesthouse, it pushes engineering to its limits to meld with the territory, taking inhabitants deep into the snow.

If the impulse to find refuge in the earth comes from the earliest modes of survival – the cave as shelter – then the sophistication of the materials at play in these contemporary structures also allows architects to move in the opposite direction – building outwards instead of sinking into the land. “In previous centuries, buildings in the mountains were practical, simple structures with minimal glazing to prioritise insulation from the cold. Modern building techniques have enabled structures to be built high in the challenging terrain and be opened up to nature through the use of high-tech glazing and transitional interior–exterior spaces.”

House in Yatsugatake (2012), realised by Japanese firm Kidosaki Architects Studio, extends outwards from a slope on a reinforced-concrete base supported by two angular struts, with floor-to-ceiling glazing offering soaring views of the Yatsugatake Mountains. The designers say it is like “living on a cloud” – a description that captures, perhaps accidentally, the otherworldliness of these locations. Mountains are border spaces. They hang above normality, teetering in the imagination on the threshold between mankind and the universe beyond, between life and death. It is a mythical dynamic that endures, even if it is somewhat muffled by reinforced concrete and insulated glass.

This threshold is thinner still in Rabot Tourist Cabin (2014) designed by Oslo-based firm Jarmund / Vigsnæs AS Arkitekter. Situated on a small exposed plateau, 1,200 metres above sea level, the constraints of its lofty location are more keenly felt. Built for the DNT (Norwegian Trekking Association), set amongst the glaciers of northern Norway, it is produced for heavy wind and storms and is inaccessible by road – only to be reached on foot or on skis. Here, the balance between life and death is palpable. A secondary rescue hut is just 50 metres away in case the cabin is destroyed.

Whilst a shelter in this location would traditionally have to be completely sealed off from the elements, specially calibrated glass has allowed its designers to install full- height windows. Elsewhere, solar panels provide electricity for the lights, and internal sliding doors allow rooms to be cut-off for more efficient and contained heating.

Thilo Alex Brunner’s On Mountain Hut (2019) provides more ingenious solutions for surviving extreme conditions. The structure is perched 2,499 metres up the side of the Swiss mountain Piz Lunghin. It is only accessible by a two- hour hike, and the precarious demands of its location mean the weight of the single cabin has to be kept to a minimum. It is also completely self-contained in terms of power and waste, with a reflective corrugated-metal exterior (covering a plywood interior), solar panels for energy and an in-built water harvesting system. It casts a strange figure on the mountainside: like a time machine transported into pre- history. Unlike other projects, which root themselves deep into the landscape, this shelter is purposefully ephemeral.

“We built it with only two materials: wood and metal,” says Brunner. “The whole structure has been constructed from wood – the cladding from metal. It was assembled in a very simple way, [intended to be] very easily taken apart again and eventually recycled. We built the hut in such a way that it only requires the assembly of a small selection of pieces. The few heavy parts were transported by helicopter. The smaller parts and equipment were transported with countless walks on foot. Two people put the whole hut together.”

Some projects go further, using the constraints of the environment to totally reinvent the shape of a home. Mountain Cabin (2012) by Austrian firm Marte.Marte Architects is a cuboid set above the Austrian ski resort of to be completely sealed off from the elements, specially Laterns. The house is pale grey in colour and has sharp

right angles. It looks as if it could be the entrance to a secret military base. “It is reminiscent of a fortified building like a castle,” agrees Stefan Marte, from Marte.Marte Architects. He explains that the shape actually came from the need to balance the functions of the house with the steepness of the terrain. “We stacked the rooms on top of each other. An empty space (cut out of the volume) takes over the sun terrace and becomes a weather-protected entrance. In all conditions, even with two meters of deep, entrenched snow, the entrance still protrudes from the steep slope.”

Marte says that, when building within hillsides, finding the right balance between an expressive architectural language and the landscape is a major challenge. “We are always filled with a certain humility and not everything that is technically possible is conceivable for us in such a place. Designing with extreme altitudes and dealing with the effects of natural forces, especially the unpredictable harshness of winter, is what makes building in the mountains so special.”

These diverse buildings are all connected by a sense of reserve – despite their high budgets. It is, indeed, hard not to marvel at the engineering that allows for a building to be sunk into the ground, to jut out the side of a cliff, or to sandwich a sun terrace between stacked concrete cubes. However, these complex elements are balanced with an underlying sense of modesty. The materials and aesthetics, as well as the handling of light and space, stem from an understanding and respect for the harsh environments.

The beauty of the mountain comes in part from its threat. This concept guides all of these projects. The G House (2018), designed by Alfredo Vanotti in Castione Andevenno, Italy, is another example. The raw-concrete structure is built on a

hillside, its entire south-facing side opened up with floor-to- ceiling windows, taking in the vast Bergamasque Alps. On the other side of the building is an old bell tower, its clock face hanging above the residence. Vanotti’s building teeters in this way between the manmade and the organic. The south gallery provides views of the changing seasons on the peaks; the bell tower to the north a reminder of how we measure and organise time. “I felt that the beauty of the landscape must be highlighted, and the architecture must integrate and not overpower or destroy it,” says Vanotti. “The house had to be part of the territory as much as possible.”

So what can we learn from these projects away from the peaks? Separate to the clear imperatives that come with steep, snowy heights? Against the backdrop of a worsening environmental crisis, when there is a clear need to reconsider our relationship with the planet, how can we use mountain architecture as a test bed, applying its ideas at ground level? Responding to the landscape and existing materials instead of imposing a new structure – as well as an attention to vary- ing weather demands – are valuable considerations for cities and towns as much as they are for remote destinations.

Cut off from the grid, forced to come up with self-contained solutions for powering lights or keeping warm, the mountains compel innovation, but the results do not need to be the preserve of isolated retreats. Indeed, with the looming threats of extreme weather conditions and dwindling natural resources, adventurous architecture will be essential in the coming years as we face a whole different sort of precipice. The heartening news is that, on the evidence of these innovative design projects, humanity has a knack for finding a foot- hold in even the most challenging and remote conditions.

Living in the Mountains is published by Phaidon 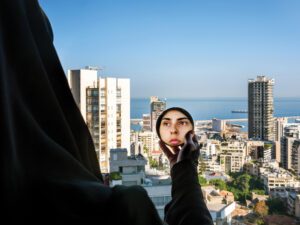 An exhibition in Santa Monica highlights artists with diverse backgrounds – illustrating the central relationship between the humans and the land. 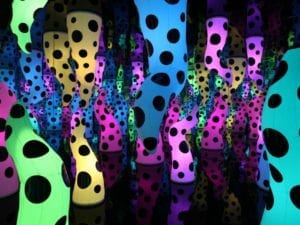 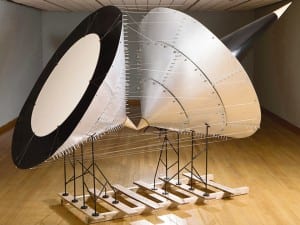 There are two weeks left in the call for submissions for the Aesthetica Art Prize 2016. This year’s longlisted artists, published in Future Now which accompanied the exhibition, include Nathaniel Foley with his sculpture inspired by aviation and travel.