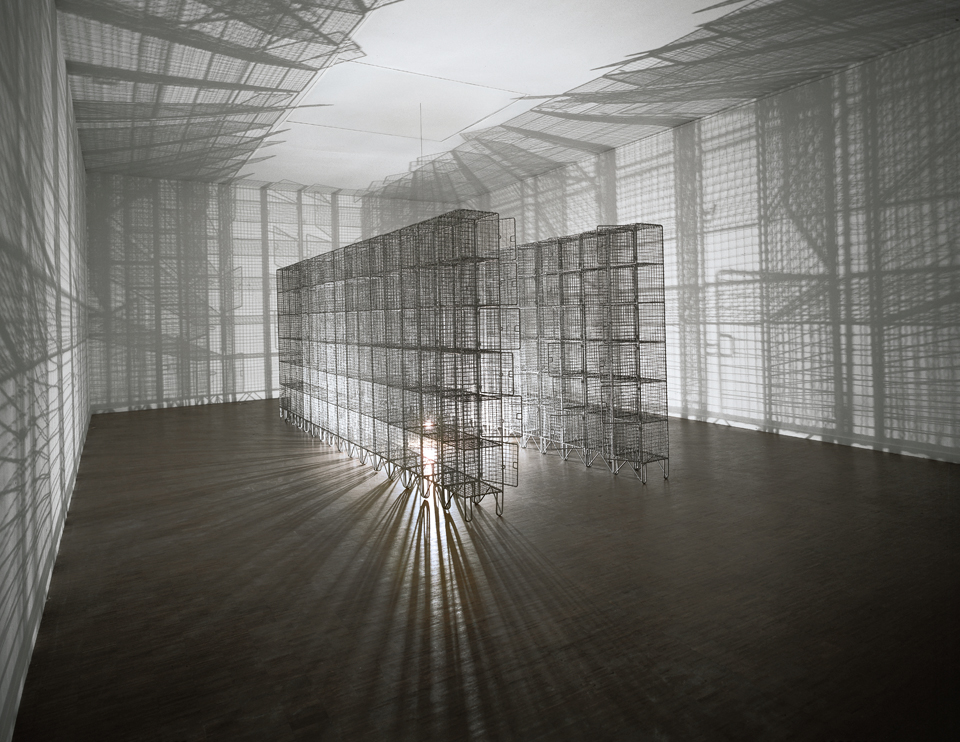 A major exhibition opens at Tate Modern, creating a conversation between the dangers of domesticity and the depths of identity in today’s world.

When artist Mona Hatoum (b. 1952) walked down a street in 1985 in Brixton, a predominantly black working class neighbourhood in London, every passer-by turned to look. Wearing a boiler suit and a pair of black Doc Marten boots tied to her bare ankles, the artist slowly proceeded to walk the streets over the course of an hour. Her controversial choice of footwear was closely associated with the police and to wear the boots, shackled to her feet, signified a revolt against the sense of oppression which was keenly felt by this community. Hatoum’s art, some 30 years on from this performance, still succeeds in provoking debate and in exposing issues relating to exile, impoverishment and oppression. Emphasising the starting point in Hatoum’s radical thinking and her political approach to art, London’s Tate Modern will present a major retrospective of her work, which will open this May.

It is difficult to mention Mona Hatoum without first noting her personal history. Born in Beirut, of Palestinian parents, and an exile in London in 1975, her history is fundamental in the way it informs her practice. Her education in London, at the Slade School of Art, 1979-1981, gave her a direct entrance into the London art world. Veering away from traditional art-making materials, Hatoum explored the potential of performance and “live” works. Running volts of electricity through household objects, she presented these works in half-hour sessions to an invited audience. These early works evolved into later full-out performances that were both personal, as with Measures of Distance (1988), and political, as illustrated by The Negotiating Table (1983).

Tate curator Clarrie Wallis argues: “It is often forgotten that she has only ever made two works that directly relate to her personal history – the performance The Negotiating Table (1983) and the moving autobiographic video Measures of Distance (1988).” She believes that “the significance of Hatoum’s work lies in her ability to balance the specific and the general, to draw on particular cultural and political milieu, and to show how these reflect wider, universal concerns.” Measure of Distance uses layers of text and image to create a collection of memories and language: Hatoum reads aloud, in English, letters originally written in Arabic from her mother.

The text moves across the screen, over slides of her naked mother taking a shower. The intimacy in the familial relationship is somehow subverted by the discrepancy in language; by denying her mother’s tongue whilst transcribing, she is, in turn, opposing the idea of the maternal figure. This is not the case, but by this approach, Hatoum raises issues of separation, displacement, sexuality and the maternal identity in a very evocative way. She discusses the work in an interview with Janine Antoni: “When I made Measures of Distance it felt like I had unloaded a burden off my back. I felt afterwards that I could get on with other kinds of work, where every piece did not necessarily have to tell the whole story, where I could just deal with one little aspect of my experience. That’s when I started making installations.”

Hatoum is well known for her large-scale projects and sculptures, works which are rooted in the formal language of Minimalism and Surrealism, yet transformative in their re- reading of words. With Light Sentence (1992), Hatoum takes 36 industrial units of wire mesh lockers and places them in a darkened room, the only light source being a single lightbulb which sways in the centre. The locker’s minimal lines stretch upwards and are reflected on the surrounding walls; the shadows act to create a dramatic and unstable environment that Wallis describes as “beautiful and sinister”.

Light Sentence is cited by Wallis as a critical piece in Hatoum’s career; after which she very clearly moves away from video and performance to instead create environments and installations. This shift was predicated by a fellowship at the Cardiff Institute of Higher Education in 1989. Away from the pressures of London and from her peers, Hatoum found the time and energy to explore new ways to innovate: The artist says: “By the late 1980s I wanted to take my body, that of the performer, out of the whole thing. I wanted the viewer’s form to replace mine by interacting directly with the work.”

With Light Sentence, the audience is situated at centre stage; they become prisoners confined within the wire walls of the lockers. This interest in the idea of imprisonment continues to occupy Hatoum, from early works such as this and Incommunicado (1993) through to more recent pieces like Impenetrable (2009): which is a cube that is formed of hundreds of barbed wire rods dangling from fish wire. From a distance the steel latticework appears to be quite delicate, but on closer inspection the aggressive nature of the steel comes into focus. It recalls fences, prisons and camps.

Not all of Hatoum’s installations are quite so intrusive in nature; in Suspended (2011), what appears to be a room packed with red and black swings – a children’s playground gone awry – is in fact a constellation of cities dislocated from their country. Each swing bears the street map of a metropolis carved into its seat, and with the familiar images of childhood constantly in motion while visitors circulate, they represent a moving diaspora: migration in motion. More than ever, given the growing numbers of people displaced from their homeland in recent years, the artist’s work is judicious and prescient, and it is for this reason that Tate have chosen this particular moment to hold a retrospective of Hatoum’s work (her first museum show in London since 2000 at Tate).

Presenting familiar works, such as Corps étranger (1994), Present Tense (1996) and Homebound (2000), against more recent works, including Twelve Windows (2012-2013), the exhibition presents an oeuvre that is defined by its dual preoccupations with both the political and the aesthetic. Over 100 works are on display, and Wallis has chosen to present them via “a series of juxtapositions that mirror the complexity through which Hatoum manages to challenge and disturb our assumptions about the world around us.”

These complexities can be obvious, as with Present Tense, an installation of 2,200 cubes of traditional olive oil soap from the factories of Nablus (a city north of Jerusalem). The cubes, laid out next to one another on the floor, each have tiny red glass beads pressed into their surface. These tokens trace the territories which were meant to be returned to Palestinian control under the 1993 Oslo Peace Accord. The borders of these disconnected areas of land appear like blood-red veins across the uneven grid of soap: pertinent, since much blood has been shed on them. Like Present Tense, Hot Spot (2006) blazes into focus with a neon red, cage-like globe, taking maps and the contested borders they depict as its key topic.

Wallis describes Hot Spot as buzzing “with an intense, mesmerising yet seemingly dangerous energy”: an energy that is not limited to its material form but its subject – political hotspots. Generally this terminology refers to a specific site of conflict, but here Hatoum lights up the border of every landmass forming the translation: the world is in conflict.

Maps and georgraphy have occupied artists for centuries, more recently with Francis Alÿs’ The Green Line (2004), a performance in which he walked 24 kilometres holding a leaky can of green paint, across the “green line” running through the municipality of Jerusalem: a highly-contested demarcation on a map and one which has caused much strife. Other artists, Alighiero Boetti, for example, have occupied themselves with the way in which borders change with time: how a political map made in 1989, for example, would depict Zaire and the USSR, differing from our modern understanding of geography. Hatoum is more explicity interested in people and their own understanding of national identities rather than the arbitrary perimeters which may contain them.

Twelve Windows (2012-2013) consists of 12 pieces of embroidery made by female Palestinian refugees in Lebanon, which particularly reminds observers of Boetti, who travelled to Pakistan and had female Afghan refugees stitch his works. Hatoum’s relationship to textiles is more personal as she closely associates knitting, weaving and sewing with her childhood. Approached by Inaash, a Lebanese NGO, and asked whether she would like to include their hand-made panels in her work, she jumped at the chance. The 12 panels are suspended on criss-crossing steel cables like washing: their bright colours and vivid patterns each represent a different region of Palestine. Wallis notes that the “the act of embroidery functions as a means of keeping traditions alive.” More than that though, it functions as a way for the female refugees to maintain a sense of normalcy and unity in a world of displacement and exile, which is anything but a normal life by any conventional standards.

Even Hatoum’s familiar work Corps étranger has a feeling of the unfamiliar each time you view it. Completely conscious, though under the influence of pain killers, Hatoum navigates her insides via an endoscopic camera and with the assistance of a doctor: “It is about how we are closest to our body, and yet it is a foreign territory which could, for instance, be consumed by disease long before we become aware of it.” The artist recognises her own body as unfamiliar; being probed, violated and analysed, it becomes a scientific shell ready to be o ered up for viewing to an outside audience. When exhibited, the video is projected onto the ground so that the audience can walk over and “into” her body: the audience becomes the ultimate voyeur, transgressing the final boundary between artist and audience – skin.

This strict difference between the familiar and unfamiliar runs throughout the artist’s work. In Homebound, kitchen utensils and household furniture are transformed into an electronic tableau; the objects are connected by an electric wire through which courses an audible current. The work is threatening and disturbing, rendering the idea of home being a safe haven as ridiculous. Instead, home is posited as dangerous – deadly to the touch. For an artist who was stranded in London after the onset of the Lebanese Civil War (1975) the idea of domesticity was, indeed, to be avoided. The inherent sadness in these memories is what makes Hatoum’s work so powerful: her work strikes at the heart of our fears and our loneliness. She manages to simultaneously challenge and embrace her audience, a feat which the Tate exhibition will offer up for consumption. 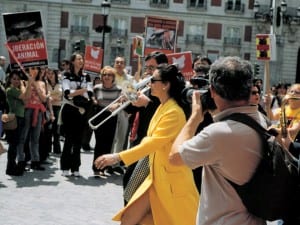 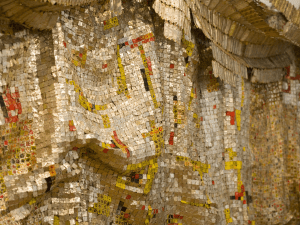 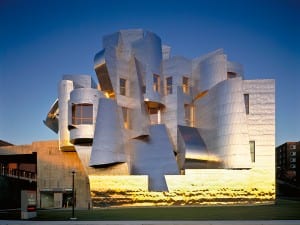