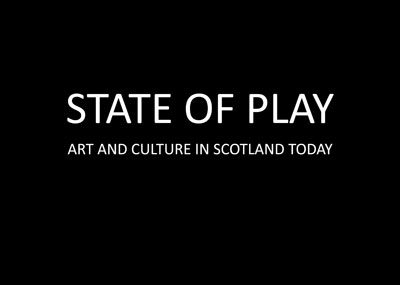 With the recent announcement of the Arts Council England (ACE) cuts and funding decisions, the disbandment of the UK Film Council into three regional hubs in Birmingham, Manchester and Bristol, the location of artistic practice has become part of the debate. Following in this debate, The National Gallery, Edinburgh hosted AHM’s second symposium to discuss the current role of culture in Scotland. The day saw a collection of 200 industry professionals and students gather under the theme of the artist away from home.

The day opened with 9 individual manifestos read by a collection of students, recent graduates and artists’ collectives which helped set the scene for the day’s discussions. Following this a video speech by journalist and historian Neal Ascherson discussed the change he has noticed in the Scottish cultural landscape, with Scottish history playing a key role in this and discussed a Scottish-Polish settlement that slowly lost all its ties to its cultural heritage, like a strange alternate-ending of the Darien Venture. After this came Douglas Gordon’s wry presentation, with an elongated minute of silence, where he showed samples of his work 24 Hour Psycho (1993) and a self acknowledging piece where an American journalist tried to track him down for an interview after his Turner Prize nomination back in 1996. Gordon’s appearance as a speaker added a jovial and colloquial thruway to the theme of the Scot returning from abroad. Though the next speaker, Thomas Lawson’s statement: “I am an artist foremost; nationality is secondary,” was a middle-ground alternative.

Lawson, as an artist born in Glasgow, is a fitting case of one who felt drawn to art in the 1970s but discovered no sense of community within the Glasgow scene and thus moved to New York. One of the key statements he made, and one that the next speaker Jim Mooney agreed with, is that artists are drawn to places of community and support and, although it was not available at the time of the 70s, Sandy Moffat, as Chair for the event, put forward the notion of that community definitely being more visible today within Glasgow and Edinburgh (most notably because of the AHM organisers past histories of starting collectives and galleries like The New 57 Gallery in Edinburgh).

With the subject of his early work upon arriving in America, American’s felt his pieces were too local in their Scot-centric quality and he concedes they later broadened into a mass media American/Universal image. Though as a defence he stated: “The location of the local is a moving target and the provincial is never set.” From his own experience of now teaching at CalArt’s in the States he too has found that LA as a periphery to the NY core is always trying to meet standards set by their art ‘base’. It is an interesting comparison to connect to London and the rest of the periphery institutions in the UK. Could it be stated that British art is always trying to catch up to the standards set by London? He ended with comments on LA’s schools missing the use of critical debate and brought up his own web venture East of Borneo to help facilitate this, adding that as a teacher he has come to grasp the tribal aspect that can relate to the art worlds judgements of art: students make a piece – bring it in for group critique – the work is discussed, argued over, debated and over a course of weeks and months a consensus builds on whether the work is successful or not.

This idea of critical debate blended well into Jim Mooney’s own experiences of going to art school in Edinburgh in the 1970s, in that he too felt there was no critical debate around works, and even around the schools own ethos, feeling it was still drenched in homophobia, conservatism and an elitism akin to some London schools (one aspect that may not have changed). For a day that was moulded for praise of Scotland’s accomplishments Mooney came as a much-needed critique of its murky history with its slow decision to legalise homosexuality (a staggering 13 years behind England).

Mooney’s cutting point though, that brought up passionate debate, was around the Scottish education system, which has aged with growing concern, especially in regards to the current higher education fiasco under the current government. Since Higher Education is relatively free in Scotland the open-ended question was how it should be shaped in regards to using new models of education in relation to creativity and the overall fear of bureaucratised education modes destroying more open methods of learning in art school and university contexts. The question fell simply to funding.

Following Mooney came two more speakers from the Scottish diaspora based in Australia, the curator Liz Ann McGregor on DVD and Peter Hill discussing his own travels, experiences and super fiction work of phantastical museums and pubs. Hill discussed David Walsh, a sort of rock star millionaire who built his own underground museum, MONA, in Tasmania containing an impressive collection of aggressive and contemporary punk art. Alongside Margaret Hunter, an 80s neo-expressionist painter, they discussed their experiences of being “Scots abroad” and how they felt things had changed and were changing within Scotland’s cultural sector. A criticism arose though about representation of the “New Scots” being represented in these symposia, since outsider voices had been lacking in both events, which was more than true

In closing Tom Normand, a historian who specialises in cultural and national identities, finished up by clarifying that Scottish artists may have an anxiety towards being viewed as provincial and that the global and local are in constant collision and change, as the internet and mass media systems clearly illustrate. He rounded the symposium up well in stating that the manifestos at the start shows that a diverse range of youthful and opinionated artists live and work in Scotland today and, as Sandy Moffat concluded, hopefully that diversity can be acknowledged in their 3rd and final symposium in September. 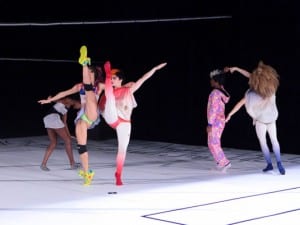 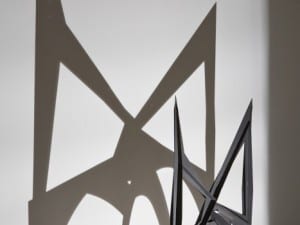 Review of Calder Shadows at Venus Over Manhattan

Installed in one and a half days, Calder Shadows at Venus Over Manhattan is a remarkable experiment. 11 Alexander Calder mobiles occupy a darkened and otherwise empty exhibition space. 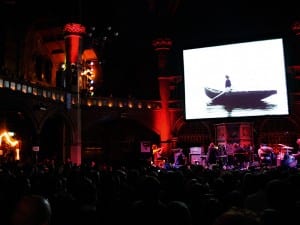