The top floor of Raven Row gallery is divided into two adjacent, small, white spaces. Each room contains two sets of shelves, back-to-back. On the shelves are arranged an assortment of uniform black box-files, labelled with their contents, presented in alphabetical order. A simple instruction on the wall, scrawled in informal purple text, reads “please touch”. The piece, by Babak Ghazi, has been made over the past four years, and is called Lifework (2008-).

There is little choice but to open the files and peer inside. Labels such as “Children, “ArtForum Top Tens”, and “Morrissey Handwriting” epitomise the matter of fact naming system. Opening up the latter folder it contains, as you might suspect, newspaper and magazine cuttings bearing writing penned in Morrissey’s own hand. The file “Brother-Sister Incest”, contains four books, amongst them Ian McEwan’s The Cement Garden, and Vladimir Nabokov’s Ada or Ardor. The books have been thrown together by this theme, but wouldn’t be related by any other. In each box a set of objects or images contextualised only by a correlative title, sometimes immediately transparent, “Katie Price”, and sometimes indistinct, “Backs of Heads”. The files are usually more compelling in their unseen potential than their actuality; “Gerhard Richter Atlas” simply contains the mass-produced book documenting Richter’s Atlas project up until 2006, no more, no less.

A floor below, the archive continues, this time formed by stacks of grey plastic boxes against the wall. A container titled “Elizabeth” holds, amongst other things, a matryoshka doll, an image of Bambi impaired by biro scribbles, and Kate Bush’s album, Sat in Your Lap. The objects are bound by the idea of Elizabeth, but no true nod to her identity is given. Rather than the archive of books and cuttings upstairs, there is a tangible impression of a personal association with the objects in these boxes. Another container, labelled “Alice”, contains a series of hundreds of photographs of a twenty-something year old girl. The feeling of looking through another person’s ordered, private belongings begins to surface.

I turn to another box entitled “Drawings”. The pictures correlate as a set of early artistic exploits, practice drawings of human figures and nudes, and a portrait of Michael Jackson. This appears to be a recurrence of the twelve Michael Jackson box-files upstairs, and as such, the drawing further suggests a personal fascination with the figure on the part of the artist. On closer inspection however, the drawings are revealed as the work of multiple individuals; all are signed by different authors. What appears a coherent body of work, a selection of childhood drawings, becomes simply a collation of found or procured items related only by their context. It is not clear whether all of the objects in this carefully curated archive, like the drawings, are imbued with significance simply by their placement and categorisation. Where the arbitrary and fabricated cross over into the autobiographical can no longer be distinguished. The inherently subjective nature of categorisation is brought into focus.

The ground floor of the gallery holds Gareth Jones’ Untitled Structure, a spread of assemblages and assortments of re-appropriated, recognisable objects. The unorthodox quantity of closely spaced pieces immediately saturates the rooms. The space between the objects takes on a movement. The viewer navigates a square of twenty-eight-by-twenty-eight toilet roll-spools; six, worn, grey Hi-Tec trainers arranged as a self-supporting catherine wheel, toe-to-insole, propped against the wall; a heap of white, elastic waistbands removed from Calvin Klein underwear amassed on the floor; a brown ribbon of a tape cassette hanging down from the wall, swaying with every passing breeze; a sprig of gold Paperchase wrapping-paper-rolls precariously held upright by a gold silk necktie. There are too many objects to list, and indeed the initial impression is that there are simply too many objects.

Material is used factually and non-pictorially. The origin of the objects on show is completely transparent. Whilst at first the scattering of pieces filling the gallery space seems haphazard, there is a vocabulary running through them. Each of the four shoe-based sculptures contains six shoes (three pairs), whilst each of the four tape cassette sculptures uses only one tape. The profusion of objects comes to signify a singular, structured work, a representation of a single working methodology encompassed under a sole title, Untitled Structure.

The initial sensory overload in Gareth Jones exhibition gives way to a series of patterns and structures. The work hints at a codified language of objects cumulated over a quarter-century, though remains ultimately and absorbingly enigmatic. Ghazi’s hidden, accumulated mass of information would seem thematically distant from Jones’ work, but just below the surface of its hyper-organised façade, lies a secondary principle. Even in the most objective of archives the viewer will, regardless, forge a subjective path; presented with such a surplus as to inhibit a singular understanding of purpose, they create their own.

Both exhibitions present an excess of content. Like Jones’ entanglement of material patterns, Ghazi’s comfortable, shelved semblance of stricture offers a pretense of rational and archival logic, only to give way to a disarrayed mass of information that refuses to be contained by its material or theoretical categories. 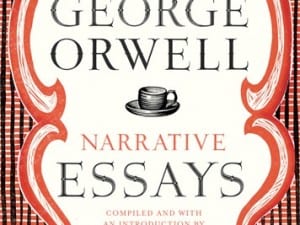 Narrative Essays, part of a set with Critical Essays, was collected by George Packer to do justice to Orwell’s extra-ordinary talents as a non-fiction writer. 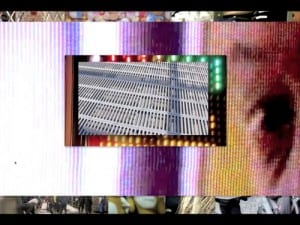