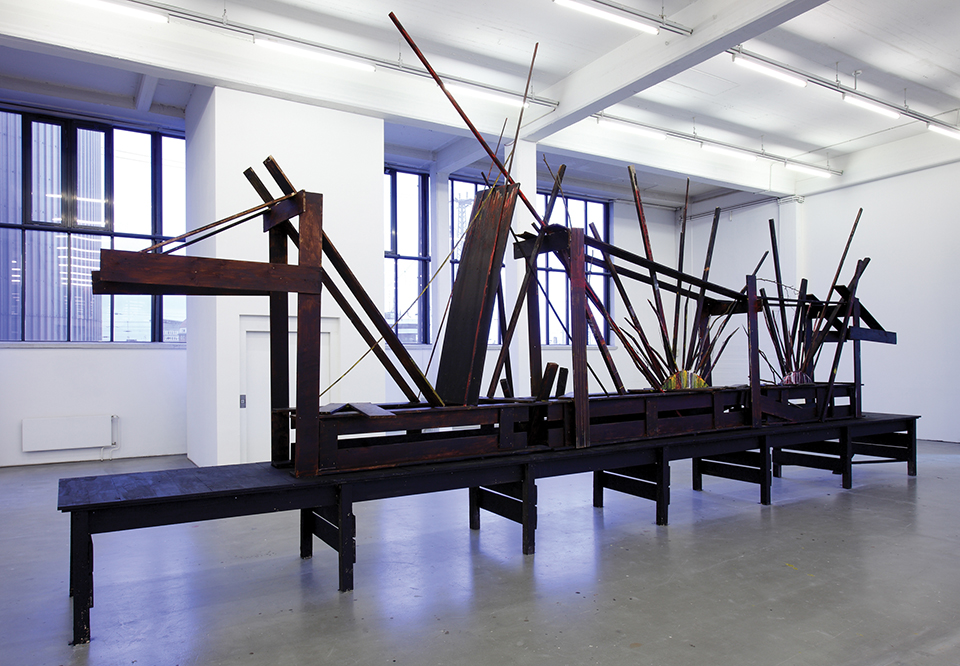 What common thread runs between artists, Vlassis Caniaris, Jannis Kounellis, Kostis Velonis and Rallou Panagiotou, except for the fact that they are Greek, have lived or studied abroad, and have all exhibited either in Greece or outside in the past year? In a country bound by a complex network of histories, and the relationships both Greeks and non-Greeks have with those histories, a discourse emerges between the recent exhibitions the four artists staged in 2010, and the relevance this bears to contemporary Greece and beyond.

The impetus began with Jannis Kounellis’ (b. 1936) London show at Ambika P3, presented by Sprovieri Gallery (23 April – 30 May 2010), which exemplified the artist’s interest in memory and space. The only artist of the four who continues to live outside of Greece, Kounellis is one of the leaders of Arte Povera. The Ambika P3 exhibition showcased Kounellis’ consistent use of found objects and materials that refer to 20th century industrialism and manufacture. With a centralised installation consisting of 12 steel rectangular containers filled with coal and framing arrangements of wine bottles, black winter coats, material and rope, the containers were positioned in the letter “K”. At once a self-reference, it pointed to the protagonist of Franz Kafka’s, The Trial, Josef K.

The story of Josef K. is a metaphor for the individual in society. In The Trial, he is arrested and executed by an unknown authority with no reason given for his prosecution. Representing the powerlessness of the individual in a world determined by political structures that revoke personal autonomy, the parable also highlights the fallacies of the individual for allowing such structures to exist. Wandering through the former-industrial site, now Ambika P3, the show conjured up an era when steam trains transported men in thick, woollen winter coats across Europe in search of a better life, or to put it in plain terms, economic security. Touching on the invisible forces that drive societies into capitalistic systems of production, the retro presentation adopted a sinister aura of contemporaneity. If Josef K. lives, does he live through all of us?

For Caniaris (b. 1928), his focus on political and economic systems manifests in the Gastarbeiter – Fremdarbeiter series, made while living in the Federal Republic of Germany (FDR) on a DEADE scholarship from 1973 until 1975. The works document the experience of migrants living in the FDR at the time, a result of one of many bilateral agreements between Germany and a number of European countries to import and employ low-skilled workers in various sectors of the national economy, which started with Italy in 1955 (Greece signed the agreement in 1960).

Room (1974), an installation the Breeder Gallery submitted to Art Features at Art Basel 41 in 2010, is one such piece. The recreation of an immigrant home, using materials that one would have scavenged for, from tin cans of food, to soiled sheets, was described by Linda Yablonsky in T Magazine (The New York Times in-house publication, June, 2010) as a work “that could show today’s art students more than a thing or two about a world greater than themselves.” The installation represents a historical continuum. On some levels, it could be compared to the historic repatriation of some 1.5 million Greeks from Asia Minor, Anatolia and Eastern Thrace in the first part of the 20th century, who returned to a Greece ravaged by war, bankruptcy, and famine, struggling to support its sudden burst in population. It could also reflect on the current influx of political and economic migrants coming into Greece from unstable parts of the Middle East and Africa. Unofficially appointed by the 2003 Dublin II regulation as one of the main processors of asylum applications in the EU, Greece now accounts for 90% of all detections of illegal border crossings into the EU.

Caniaris is careful to note that although some of his works focussed on immigration, they were made for a very specific time, and the mechanisms by which immigration operates have changed. Nevertheless, the continued relevance reinforces Caniaris’ observations of how immigration and exile are experienced on a human level. His representation of displaced communities emphasises the absurdity of placing economic and political interests above humanity, while presenting the survival choices families must often make for the sake of their future. Leaving home is the hardest, but at times, the only option when faced with no other feasible choice.

It is a well-known fact that there are more Greeks living outside of the country than within it, a result of some three centuries of migration that began under the period of Ottoman rule from the mid-15th century. This re-intensified under the German occupation of Greece in WWII and the Greek civil war that followed, with another wave sparked by the military dictatorship led by George Papadopoulos from 1967 to 1974. These experiences are deeply ingrained in the modern Greek psyche, and create a sense of friction both inside and outside of Greece. According to Dimitris Tsiovas in Greek Diaspora and Migration since 1700 (Ashgate, 2009) the Greek Diaspora is the second largest in the world behind China and regarded as one of the paradigmatic historical Diasporas alongside the Jewish and Armenian. With the largest proportion of the Diaspora living in the United Kingdom, the United States and Australia, and with communities living on all continents, it becomes clear that Greek identity is incredibly multifaceted and in many ways, unresolved.

Greece’s generation of young artists have inherited a history as weighty as the Acropolis hill, and are tackling the intricacies of belonging to a country that has never truly unified its vast chapters of occupation, resistance, hierarchy, and internal conflict. Aside from its ancient past, which was essentially appropriated in Europe by the Italian Renaissance while Greece was experiencing the “dark years” of Ottoman occupation from the mid-15th century to 1828, Greece is a country grappling with the notions of autonomy. The seven-year War of Independence (1821-1827) – known simultaneously as an example of Greek bravery, foreign meddling, and infighting – was just the beginning in a long road towards Greece becoming a fully-fledged democracy in 1974. As such, it is important to remember that despite a celebrated past, contemporary Greece is incredibly young.

Experiencing its own Renaissance from the 1930s, which coincides with the establishment of the Greek monarchy in 1932 by the Great Powers (it was officially abolished in 1974), writers, poets and artists began to actively redefine, or in many ways reclaim, “Greek” identity through the European language of modernism, the avant-garde and post-modernism. This process continues today, though for Rallou Panagiotou (b. 1978), the youngest of the four artists included in this survey, being Greek is of no importance. Heavy Make Up (AMP, 23 June – 2 October), Panagiotou’s first solo show, unites modernism with popular culture, essentially cancelling out both movements in the process. Creating a negative space where memory becomes void, her multi-referential work instinctively takes on history in order to neutralise it. The result is a contemporary portrait of a fragmented individual in the 21st century world where borders and influences are over-ridden through the constructs of international pop culture.

Kostis Velonis (b. 1968) sees the benefits of opening one’s field of research to a global investigation in his recent show at the National Museum of Contemporary Art, Athens; Loneliness on Common Ground: How Can Society Do What Each Person Dreams? (EMST) (12 May – 5 September, 2010). Referencing Constructivism and the ancient theatre as a public outlet for political discourse, the exhibition was uncannily timely when juxtaposed against the riots that erupted following Greece’s crippling debt revelation that triggered the worst economic crisis to ever hit the European Union in May 2010. It also re-ignited deeply-ingrained issues within Greek politics and society that had come to a head during the violent December riots in 2008.

Velonis’ interest in history and revolution expresses an urgent desire to re-evaluate notions of ideology and utopias that direct political action. Born one year after the military dictatorship came into effect in 1967, (which was eventually toppled in 1974, partially as a result of a student uprising 17 November 1973); Velonis has a problem with the ideologisation of history – both ancient and modern. During the recent Marathon Marathon Project (October 2010), held at the New Acropolis Museum, Velonis cautioned against misusing political ideas such as revolution, and referenced the only photographic image included in his EMST show of a young man and a woman sitting amongst classic, white marble ruins entitled, How One Can Think Freely in the Shadow of a Temple, (2008), sourced from a 1973 Greek tourism publication. When questioned how one could use the past to build the future, Velonis replied, with the Parthenon illuminated behind him: “We can be creative through history regardless of our origins.”

This leads us back to Panagiotou’s disregard for any influence her Greek identity might have on her work. It also returns to what she has said about the concept of the Greek artist being very much an individual within the wider context of Greek art history. Maybe a disconnection is vital in order to re-evaluate the fragmented concept of maps, borders, and social definitions that have structured the country thus far. As such, the fruitless task of ever really “connecting” Kounellis, Caniaris, Velonis and Panagiotou is worthwhile only in the discussion of what makes their work similar and different, what their work communicates, and what it means within a wider, less-fixed, global context. As artists, they are on a journey that investigates the unrepresented individual in a collective human experience.

In this light, it is no surprise that Constantine P. Cavafy (1863 – 1933), con­sidered one of the greatest Greek and European modern writers, is still most remembered for Ithaca (1911), a poem based on Homer’s Odyssey. An Alexandrian-born Greek who ended up living in Constantinople, Ithaca is a lullaby to anyone longing for a remote and idealised homeland, and speaks to anyone – Greek or not – who has ever experienced displacement, isolation and living in-between. As Kounellis once noted: “A journey entails casting doubts upon one’s deeply held beliefs. The next step is the creation of an image that is as much self-revealing as it is enlightening of the intrinsic value of things.”

In the end, the connection between these artists intersects in their very different and personal experiences of relating to the hypothetical concepts of society, politics, economy, and culture, as defined by the narrative of history. This is where an ongoing discourse takes place. And from what has been happening in Europe in 2010, with the Eurozone crisis, International Monetary Fund (IMF) austerity measures implemented in a number of EU countries, and recent riots in France and the UK becoming a key indicator to the public’s dissatisfaction with economic and political developments, this discourse includes just about everyone right now. 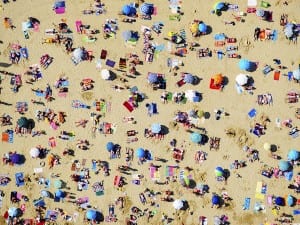 Now in its eighth edition, the UK’s leading artist fair, The Other Art Fair, opens on 23 April at its new location in Bloomsbury, London.

The main room of South London Gallery is entirely taken up by Birnbaum’s Arabesque. Before even entering the room, the flowing piano of Robert Schumann’s composition Arabesque Opus 18 reaches out to draw one into the space.