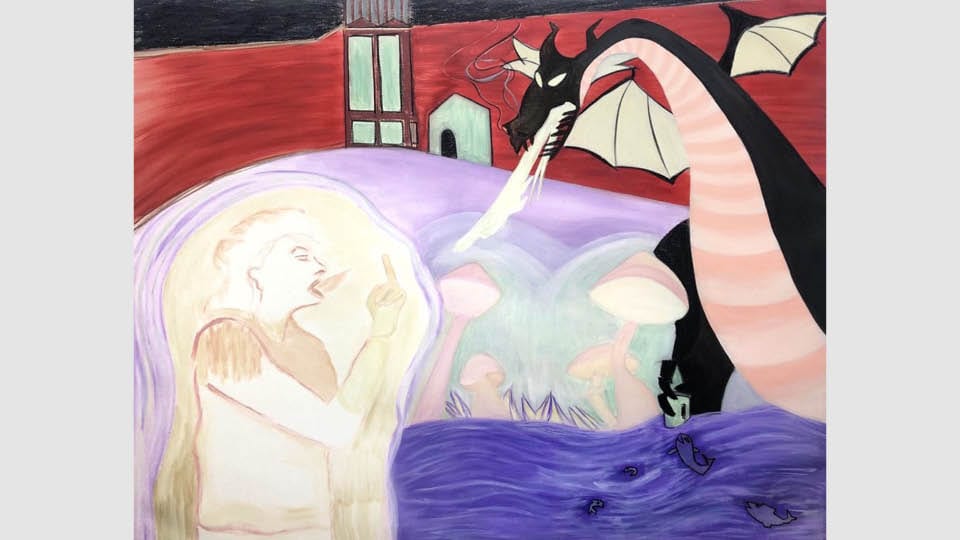 Buenos Aires-born, London-based artist Jazmin Donaldson explores storytelling within painting. Key influences include the richly-textured world of fairy tales and myths – she re-purposes known motifs to tell contemporary stories. Donaldson is particularly interested in women’s role in society – how we perceive it, how it changes over time and what feminism and the patriarchy mean today. In 2019 she received the an MFA in Painting from the Slade School of Fine Art, UCL where she was a winner of the Sir Andrew Taylor Prize.

A: In Issue 93 of Aesthetica, we displayed ‘I’ve Heard It All Before’ Said Alice. Can you describe the piece and what it portrays?
JD: The woman, inspired by Lewis Carroll’s Alice’s Adventures in Wonderland, is fighting against an enormous dragon. The dragon can be interpreted either as her own internal dragon/demons as well as conventions imposed by society, daily responsibilities and external expectations.

Her hand, painted a “washy” green, serves both as a visual sign and as a shield/armour. Two doors/portals in the background are painted in emerald green, giving the character hope for an escape; or better yet, two possible escapes. She’s the one to choose. Something is about to happen but we’re not quite sure what it is.

I’m not interested in one particular interpretation of the painting but my intention is to paint the main character in a sort of “fierce” look and posture, protected by her own bubble while sticking out her tongue to mimic the dragon’s fire/vomit.

A: You currently live in London. Do the fairy tales of your childhood in Argentina provide different inspiration from European fairy tales, or do you find universal themes that inspire your work?
JD: I think that all fairy tales, with slight variations between them, portray universal themes. More often than not the tales are similar between them (either European or Latin American) and the final message is the same. Even though stories need to be adapted to the social context and time we live in, they all originate from the same universal themes.

A: Do you draw inspiration from other storytelling art forms, such as opera? What are your preferred narratives to work with? Are there any that you revisit?
JD: I get inspiration from everything. Storytelling is a second stage. I draw inspiration from photographs, music, trips, movies and walks. There are times that I’m painting something that originated from a daily encounter and I just want to express a feeling or a sensation with no specific narrative in mind. Hopefully that narrative will be more evident during or when I finish the painting. I’m not necessarily interested in conveying something particular – just an awareness of certain feelings and situations.

I like playing with the language of painting: specifically textures and divisions of space in order to introduce time. I like the idea of allowing for multiple meanings. Part of my interest in storytelling is that I can always create a different character or reintroduce a character I already created. Through them I examine themes of identity, subversion of roles and the absurd.

A: What kinds of motifs do you re-purpose in your paintings?
JD: Animals I see in children’s illustration books, medieval doodles from Illuminated manuscripts and folklore monsters.

A: Why is painting an ideal medium for you to express these ideas?
JD: The immediacy that I feel with the medium of painting is a completely different experience than from any other medium that I’ve tried. It’s the directness, the impact, the raw instincts and emotions I feel either while working with the medium or while looking at a good painting. I don’t have that kind of connection with any other medium.

Does the large-scale size of each composition contribute to the story portrayed?
JD: Yes. Even though I vary between small and large-scale works, I do feel a difference with big works. With these, I can work with human-life scale bodies, work with more layers of paint, play more with the division of spaces and it helps me to think about more difference in textures. It feels much more liberating. I paint with a lot of gestural movements, so in larger-scale works it’s easier for me to use my whole body to work those brushstrokes.

A: What is your process for creating one of these works – from story to finished painting?
JD: It varies: it either starts with a feeling I want to portray, something that has happened to me or a story that I’ve heard. The one thing that they have in common is that they’re always told from a female perspective.

Since I am constantly looking at illustrations, photographs, movies, etc. I accumulate them and then make a kind of collage of images with all of the ones that I feel are relevant to the situation I want to transmit. I then look at all of them and start drawing. I automatically edit a lot of those ideas and discard many until I am left with a sketch of what will be the painting.

The work of Jazmin Donaldson appears in the Artists’ Directory in Issue 93 of Aesthetica. Click here to visit our online shop. 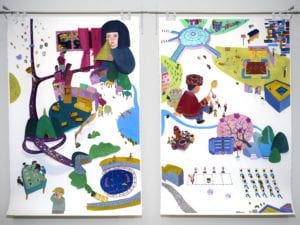 Based in the USA, Xiaojie Liu is a Chinese illustrator whose work addresses changing emotions towards living in an ethnic autonomous prefecture in China. 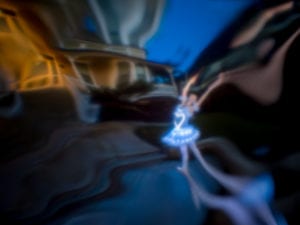 Lance Chang uses distortion and blur to enhance the movement and dreamlike quality of his photographs. Resembling the waves of the aurora borealis, his art taps into beautiful and, at times, foreboding worlds. 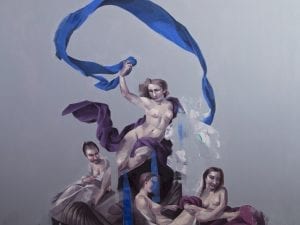