Firecracker. What’s in a word? A militant stance, a commitment to combat. Play – even a hint of kitsch. The bright flash of a camera, a breaking bulb. A way to describe a woman. A term which might express admiration, or distaste.  In short, it’s a word which does justice to the volatile issue of the gender imbalance in the photography industry. Fiona Rogers, the Global Business Manager of Magnum Photos, established Firecracker in 2011 as an online showcase of outstanding work by female photographers. What started as a scheme to draw attention to underrepresented practitioners soon grew into a space for network-building and the exchange of ideas, also providing active support for new work. The Firecracker Photographic Grant was launched to fund documentary projects, and the Contributors Award acknowledges the achievements of the wider photographic community, including mentors, commissioners and educators. Ultimately, it’s not enough just provide an eye-line to work which might otherwise go unseen; the initiative goes further, striving to ensure the sustainability of vital female practice in an industry which remains dominated by men.

The latest iteration of the project takes the form of a carefully curated book, edited by Rogers and the writer and academic Max Houghton. The result is a contemporary cross-section of subject matter and aesthetic styles: the personal intertwines with the political, and the documentary impulse is heightened by powerful concepts and supreme technical artistry. The human subject appears in multiple guises: we see bodies scarred or airbrushed, debased or idealised, posed or unknowing, and each image is a critical reflection of the eye behind the camera. What we see is the female gaze, transmitted back to us in all of its uncompromising complexity.

Houghton has been involved in Firecracker from the early days of the project: “I was working at 8 Magazine, across from the Magnum offices at the time, and Fiona invited me to guest-edit a Firecracker monthly feature,” she explains. “I chose to write about the work of Samar Hazboun, who had made a series called Hush about gender-based violence in Palestine. Though it wasn’t my brief, for my first contribution I thought it necessary to write about work only a woman could make. It really made me think about the importance of acknowledging and championing work by women.”

“Work only a woman could make.” It’s a controversial statement, but the book does prompt the question of whether there is indeed a distinctive, even universal, quality to the way these artists see. The way, perhaps, that the female gaze is drawn to the peripheries in search of the loss which has been obscured by the spotlight of the “main story.” We glimpse this loss in Poulomi Basu’s images of the family homes left behind by recruits to ISIS, and Anastasia Taylor-Lind’s portraits of the women who came to lay flowers for the fallen during the 2014 Ukrainian revolution. “Men fight wars,” she explains. “Women mourn them.”

Or perhaps that distinctive “feminine” quality is to be seen in the subtlety with which the “gaze” is reversed, and the photographers reflect on their own act of looking. The spectator is always at risk of slipping into scopophilia, and Anja Niemi’s glaucous self-portraits are parables of the entrapment imposed by the gaze. Look and lose yourself, each mise en scène seems to say. Put your hysteria on hold and let the image seduce you into mindless stasis. The underlying disquiet of Niemi’s seemingly static images is amplified in scenes of self-multiplication, where a body double might be seen sprawled under a chair or slumped in the passenger seat of a car; a notion of a split self which is taken to uncanny extremes in the work of Alma Haser. Her surreal Cosmic Surgery portraits imagine a future where human physiognomy has altered to fit our myriad personalities, a future framed in oddly nostalgic terms by her vintage photobooth set-up. Replacing the face of each sitter is a form resembling a paranormal jewel, a prosthesis, a lens or a mask – it is the original image, printed, folded, rephotographed and superimposed.

Arguably, the tendency to identify a specifically feminine vision is reductive: it can be understood as a way to define a practice purely in opposition to male counterparts rather than allowing the work to speak for itself. Houghton is well aware of this potential critique: “It’s not just the female gaze we need, but every possible gaze in addition to the dominant gaze of wealthy white men. Men’s work is much more likely to attract a solo show at a major museum, or a monograph, or be collected, as the Guerrilla Girls have so beautifully pointed out. It’s about confidence and it’s about precedent.”

A book focused solely on the work of women was always going to be provocative, and both Rogers and Houghton are keenly conscious of the responsibility due to them as editors. In her introduction to the book, Rogers recognises that “you cannot build an initiative about women without attracting comments about its exclusivity, or sexism, or encountering its reductive nature, and I’m often at odds with the contradictory nature of it all.” The contradictions are symptomatic of the process of distilling a digital project into the fixed and physicalised form of a book – a form which is designed to canonise and archive. Rogers and Houghton had a fine line to tread: the task was to include the very best work whilst also giving space to those who had received less recognition, and to produce a publication dedicated to female photographers while acknowledging they understand the fluidity of gender.

The politics of the selection process aren’t easy to navigate. However, the key to making a responsible choice is to follow one’s eye whilst maintaining a critical attitude to one’s position as spectator. “Firecracker began as a European platform, but the book encompasses the work of women who are practising globally,” explains Houghton. “We certainly made sure that we worked with photographers of colour, and we also paid attention to who the photographers themselves were looking at, and how. The criteria included freshness of approach, visual brilliance and rigour. That’s the basis of it: fantastic, world-class work. We didn’t seek to find the best female photographer from country X – we looked at bodies of work that would add to the mix in a new and exciting way. We could have made the book three, four, ten times over.”

The collection is too diverse to identify “trends” as such, but the works do reveal impulses towards performativity, collaboration and transmedia approaches. Amongst the most visually striking compositions are Aida Muluneh’s play on Ethiopian body painting techniques, and Mayumi Hosokura’s poetic elision between androgynous young bodies and glittering mineral formations. Though less theatrically lavish, Corinna Kern’s beautifully lit images have an unplaceable sense of poignancy; her study of an ageing London hoarder – or rather, the contents of his bathtub – represents a supreme example of “anti-portraiture.”

Other equally powerful selections defy our desire for aesthetic pleasure, and in doing so ask uncomfortable ethical questions. Natasha Caruana and Haley Morris-Cafiero employ tactics of tacit collaboration, turning their subjects into active participants in a manner which reveals a skin-deep seam of human cruelty. Whereas Caruana’s methods might seem ruthless – slyly documenting details of an evening spent with a married man, or sourcing wedding photos from brides selling their dresses – Morris-Cafiero’s images cast light on the casual savagery of the spectator. Using a camera mounted on a tripod, she places herself in her frame and records people’s visible reactions to her physical size and shape. Young girls in bikinis sneer, policemen pull faces, a man even poses for a photo behind her back. She too, poses – performing a sense of innocent obliviousness.

What sort of world do we live in, when a denial of the camera amounts to the ultimate pose? A world overseen by a “regime of the image”, as Houghton puts it. “Photography is probably the preeminent mode of communication to bring important ideas into discourse. We can all make a nice image and put it on Instagram, and one of the consequences is that professional practitioners and artists have to be different to be noticed.” In the wrong hands, innovation simply translates to gimmick. However, when the search to define new forms of imagery is motivated by rigorous enquiry, by a need to tell a story which rejects conventional methods, the work can attain an aesthetic and conceptual integrity. “The images here address contemporary, urgent issues,” says Houghton.

The stories they tell are designed to make us question our eyes. Is it possible to fabricate a burqa from fruit roll ups? Yes, if you are Behnaz Babazadeh, the Afghan-American artist who poses in head-to-toe designs made from American candy (“Men will always find ways to find women attractive,” she explains). Lua Ribeira, meanwhile, challenges attitudes towards flamboyant female sexuality in her celebratory images of Jamaican Dancehall culture, presenting the body as a malleable material ready to be transformed. Other stories speak of narratives which are not ours to see: Zanele Muholi’s documentation of LGBTI communities in South Africa places the spectator eye to eye with victims of hate crime, and Diana Markosian finds traces of the Armenian genocide in the trauma inherited by descendants of survivors.

Although they serve a documentary purpose, these images maintain a sceptical attitude to fact; what can we take, what can we make from evidence which starkly refuses a simple reading? Ironically, an independence from the image, a way of thinking for ourselves. Rather than heroically exposing the “truth”, these photographs seek to problematise the methods which we have developed to make sense of the world, and in doing so bring forth new kinds of knowledge.

It’s a knowledge we’ll need in the months and years to come. We feed on images, but these photographers demand that we never rest satisfied in what we see. What we want is multiplicity, complication, entanglements – real life. And if this book presents a case for feminism, it’s for an understanding of it that is as diverse and indefinable as life. 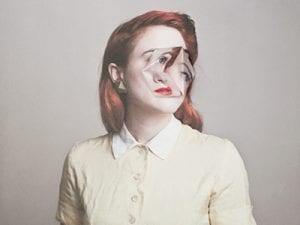 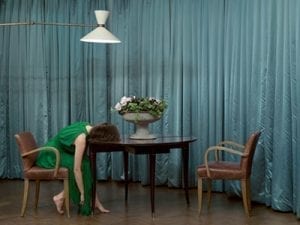 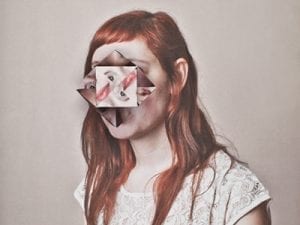 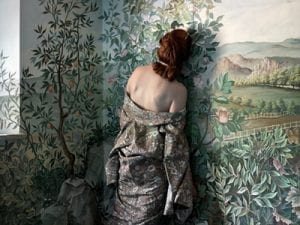 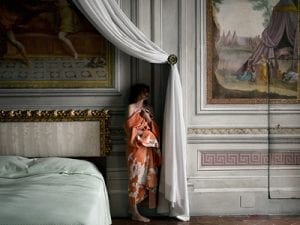 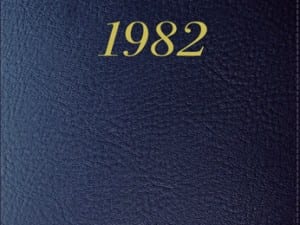 With the appearance of a desk diary, the sort that wouldn’t be out of place in Edina Monsoon’s office, 1982 features novels, theatre plays, lectures and installations. 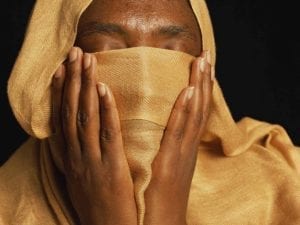 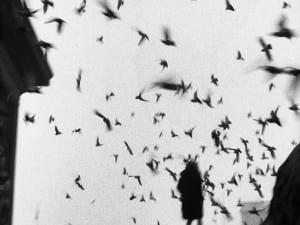