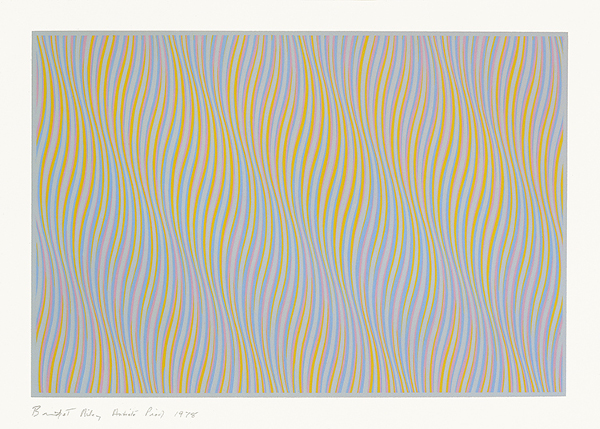 This exhibition offers an overview of the career of Bridget Riley, one of Britain’s most significant Postwar artists, taking a selection from Riley’s complete catalogue of prints which punctuates specific turning points in her career. Riley’s printmaking over the last 50 years has run parallel to the developments in her painting, the artist’s imagery consistently evolving and innovating, as she is still working today.

The show dates back to Riley’s first print, the black and white Untitled (Based on Primitive Blaze) (1962) and Untitled (Based on Blaze) (1964), which are seen as the beginning of her Blaze painting series. Another highlight of the exhibition is Fragments (1965), Riley’s rarely-seen series printed on Plexiglas whose compositions were intended for paintings that were never executed.

By the 1960s, the artist’s work had progressed to become combinations of greys, coloured greys and pure colour with Nineteen Greys (1968), Elongated Triangles (1971) and Coloured Greys (1972); then came the radical shift into colour in the 1980s which are represented in this exhibition with RA 2(1981) and Silvered 2 (1981). These screenprints are linked to Riley’s Egyptian stripe paintings, functioning as preparatory drawings in their examination of colour matching. While these works are structured and linear, Riley’s most recent work moves away from geometry into undulating curves.

Her 2010-13 series, Arcadia, is shown alongside its related wall paintings and canvas works whose subtly changing colour spectrum glides across the surface, paying close attention to the ground, light and the pace of movement. Much of Riley’s work has been described as putting a unit ‘through its paces’ whereby a single set of colours or a form is delicately manipulated to surprising effect – be this in a black and white print, greys on Plexiglas, a vibrant colour print or large-scale wall painting.

Additional details can be found at www.gallery.simsreed.com. 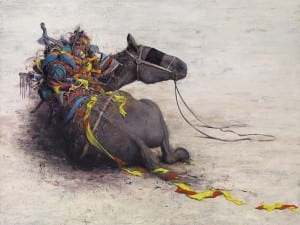 In his first solo show in London in over five years, acclaimed German artist Jonas Burgert exhibits an exciting new body of work, exploring the notion of a world suspended in time. This show presents the artist’s largest painting to date.